If you saw this year’s MotorWeek Drivers’ Choice Awards episode, you know that the Porsche 911 Turbo S earned a best dream machine award. That’s because every time we drove it, it felt like a dream come true.  Well now, there’s a new “base” 911 Turbo, and as we’ll see, it’s anything but a basic sports car.

If you love the idea of the Porsche 911 Turbo S, but are a little more frugal-minded; or perhaps you prefer a more leisurely pace to life and just don’t need to get to 60 in less than 2.5-seconds. Well, for you, the standard 2021 Porsche 911 Turbo has arrived. 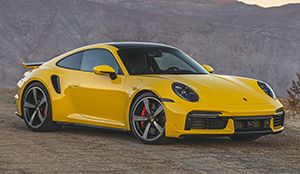 Following the Porsche tradition of ever-evolving, the big news here is there really isn’t any big news; just the latest step in its continual refinement that puts it slightly better than its predecessor in every category, yet just shy of the Turbo S when it comes to on-track performance.

So, getting right to the track; cool temperatures and a damp surface would hamper just about any car in the ¼-mile, but the 911 Turbo is built for these conditions and didn’t appear affected by the weather or track situation at all. Launch control seems to take everything into account and delivers maximum power exactly where it needs to be.

The rear tires broke traction ever so slightly, but we never felt a need to lift off the throttle, just added a little steering input and let this all-wheel-drive Porsche process us to 60 in …you guessed it…just 2.5-seconds.

PDK transmission only in the Turbo, and it fires through gears with Mil-Spec precision; not so much changing gears as forcing the next one on you. It took only 10.8-seconds to clear the ¼-mile, and your senses say you are indeed travelling at 130 miles-per-hour, yet stable as can be.

That’s just 3/10ths slower than the Turbo S; and not bad considering it’s working with about 70-less horsepower here, but with 32 more than the previous Turbo, at 572. This twin-turbo 3.8-liter flat-6 cranks out 553 lb-ft. of torque. 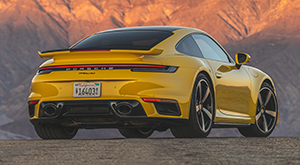 Our slalom course was no real test of this Turbo’s limits obviously, as it carved it up with ease; but it was enough for us to experience its mild tendency to understeer, easily managed with corrective steering and timely throttle lifts. Of course aided by good steering feel and hardly any roll.

While in its basic form, the 911 Turbo does occupy the gap between lesser 911 Coupes and the Turbo S; but this being Porsche, there are plenty of add-ons for both inside and out to take it in whichever direction you want.

They’re all obtainable and barely scratch the surface of the customization options available to you.

If you do a lot of driving at night, Porsche’s Night Vision Assist is a worthy upgrade; spotting a deer and warning us before we could see it ourselves.  Best to use it sparingly though, as the display can be distracting to leave on all the time, and its location in the gauge panel, does require a bit of attention.

Not that any of that stuff is necessary to enjoy the 911 Turbo; as virtually everything mechanical has been upgraded over last year.  Front track is wider by more than an inch and a half. 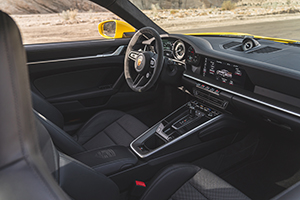 The all-wheel-drive system sends more power to the front wheels than ever before, rear-axle steering is now standard, and brakes are larger.

Aerodynamics are enhanced to harness as much downforce as possible, as well as funnel air to both feed and cool the engine.  The front splitter is now fully active, joining the larger rear spoiler in automatically positioning itself for optimum results.

Now, base pricing of $172,150 certainly gives most of us pause, but that’s a savings of $32,700 compared to the Turbo S; and if you’re seriously considering a 911 Turbo, chances are good you know what you’re in for.

The 2021 Porsche 911 Turbo is a more seasoned total performance package than ever, yet more special too; idling easily at the intersection of posh and performance. There are faster 911s sure, but none that are as much of a pure joy to drive on a daily basis as the “base, but not basic” 911 Turbo.