We drive plenty of cool cars around here, but Porsche 911 Turbos are like Christmas. The anticipation of getting behind the wheel is pure agony, but once you finally do get the opportunity, it’s everything you hoped it would be. So, come along for a real celebration, as we hit the start button on the new Porsche 911 Turbo S, and the 40th season of MotorWeek!

While the original 911 Turbo was the definition of a driver’s car, as you really had to know what you were doing to get the most out of it, being on high alert for instant oversteer when the turbos aggressively kicked in. Today’s 2021 Porsche 911 Turbo S is nothing like that; it’s more akin to a Honda Civic that got hacked by a rogue German programmer to perform like an exotic Italian supercar.

Not that it is domesticated by any means, the amount of boost being forced into the twin-turbo 3.8-liter flat-6 engine, and the power coming out of the other end, is mind-boggling. 640-horsepower out of a basic engine design that was developed with slide rulers and calculators, not computers; but again, delivered tamely. More noticeable, is the 590 lb-ft. of torque, which is 37 more than was available last year, and max torque is available at all times, not just in overboost as before.

And as a reminder, that first Turbo that was so insane with power? 234-horsepower. We could go on and on about 911 Turbo history, but there’s a track here and a new 911 Turbo S to be driven on it. 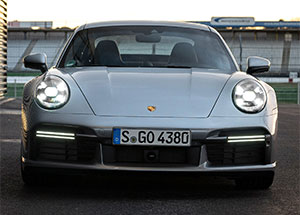 The track is the 2-mile road course of Dominion Raceway in Thornburg, Virginia; and eating up straights after coming hard out of any of its 12-turns, is where this car really excels.

The upgraded 8-speed PDK transmission does a nice job of both having you in the right gear and keeping turbo lag to a minimum.

All-wheel-drive remains a part of the Turbo package, and not only does the management software deal out torque more freely, but it also sends more to the front wheels than ever before; helping to tame oversteer tendencies by delivering more power, not taking it from you.

But that does lead to some understeer, particularly through Dominion’s slow, right-hand carousel. Despite massive grip, you do still need to exercise some restraint when getting on the throttle. But, once you do start to feed in power, you can pretty much go all in and let the car’s many systems do the hard work for you.

Ceramic Composite brakes are standard in the Turbo S and in addition to getting larger, the front calipers now house 10-pistons. We had no issues, as they performed flawlessly throughout our track day. 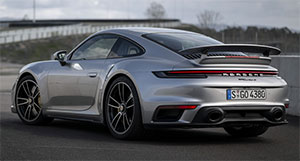 Active aero not only controls the larger rear wing, but front air flaps as well, adding downforce where appropriate.

Putting all your force on the Turbo’s accelerator pedal on a drag strip, is about as special an experience as it gets.

Flawless launch control rockets you off the line and to 60 in just 2.6-seconds; while firm gear changes in the PDK keep the insane power pouring on. The many onboard computers pretty much handle everything, dealing out max power to the appropriate places for maximum grip and acceleration. Your only job really, is just keeping the wheel pointed straight and trying to keep the grins off your face during the 10.5-second trip down the ¼-mile, finishing with the Turbo S travelling at 136 miles-per-hour.

As capable as it is, you can still have plenty of fun on a back road without feeling like you’re about to do major harm to the car or yourself, it’s even a dream to drive on the highway. Performance in normal mode is far and above most car’s sport or track modes; it may not be able to lap as quickly as say a GT3 RS, but it’s so much better on the street, there’s no comparison. 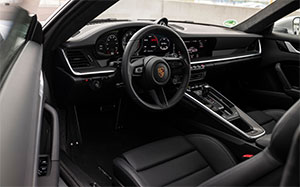 You may not have thought it possible, but everything is indeed wider than before; that will have to end at some point we imagine, but not today. The interior, more luxurious than ever, with customization options aplenty.

An available front axle lift system keeps driveway scrapes to a minimum; and if you save the location in the GPS, it will automatically happen whenever you approach that exact spot.

Government Fuel Economy Ratings haven’t been finalized, but we averaged a fine 20.3 miles-per-gallon of Premium.

Base pricing of $204,850 keeps the Turbo S something special, much like its driving experience; and yes you can get a convertible as well for $12,800 more.

No doubt about it, the 2021 Porsche 911 Turbo S is the most civilized high-performance exotic you can buy, which ironically enough, is exactly what we said about the first Turbo we tested 30-years ago. Driving it is like getting exactly what you wanted on Christmas morning, and finding out it’s actually way better than you ever imagined.

A modern technological marvel? Yes. Yet, it’s far from the most special Porsches we’ve driven. Many consider the 1988 Porsche 959 to be the first modern supercar. And this modern retro, 763  horsepower, Canepa 959SC supercar, proves that Porsche's technology and performance D.N.A. is strong enough to stand the test of time.