A Fantastic Machine by any Measure

By now you probably know that we are huge fans of the Porsche 911 Turbo series in coupe form. But how do we feel about the 911 Turbo Cabriolet? Let’s drop the top and find out.

Since this is the third Porsche 911 Turbo that we’ve tested this year; we’ll get right to what makes this 2021 911 Turbo S Cabriolet so special.  And that is of course its precision operated convertible cloth top.

A simple pull of a console-mounted toggle is all that’s required to complete the process, either up or down. Electronic motors take care of releasing the header latches, elegantly folding everything into place, and covering it all up. 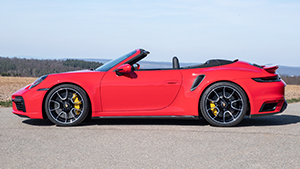 Just below those buttons is one to deploy the wind screen.  It is quite large, and also very effective at keeping turbulence out of the cabin; great for those that are not fully committed to the convertible experience.  But, it also negates the ability to have anyone in the small back seats; probably not an issue for most 911 Turbo owners.

Even more fun than lowering the top, is dropping the hammer on the throttle of this Turbo S; and the best place for that is Mason Dixon Dragway.

Typical to form, Porsche’s launch control engages easily, and rockets you off the line like few other mechanical machines that don’t involve a launch pad.

Before you even realize what’s happening, you’re at 60 miles miles-per-hour; 2.7-seconds according to the computer. And, that’s just a tenth slower than the Coupe.

Enabling this, is Porsche’s rear-mounted 3.8-liter twin-turbo flat-6; whipping up 640-horsepower and 590 lb-ft. of torque. A PDK transmission deals out the power to all-4 wheels appropriately; and now works with 8-speeds, providing brutally fast shifts that are somehow more smooth than they are violent.

In seemingly no time at all, the speedometer needle is sweeping past 100 miles-per-hour; climbing faster than the needle on many car’s tachometers.  ¼-mile completed in 10.6-seconds at 134 miles-per-hour.

The days of Porsche cabriolets being somehow less structurally sound than their hardtop counterparts are long gone, this Turbo S being about as stiff as they come; with only about 150-lbs. added during the transformation. 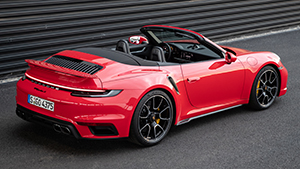 The result is immediate translation of driver inputs into vehicle movements, and tenacious  adhesion to the track surface. Virtually no body roll; and it’s consistent “point and shoot” your way through the cones, with some oversteer always available if you punch in unnecessarily high amounts of throttle.

Ceramic brake discs are standard on the Turbo S, as are 10-piston front calipers; and they bring this 3,800-lbs. machine to a halt in just 90-feet, with the car seemingly trying to dig itself into the track the second the brakes are applied.

If you’re worried about that lower ride height causing contact with pavement; an optional front axle lift system can jack up the front when necessary.

We’ve said it before about many Porsches, but everything here in the Turbo S, just... feels.... right.  And that doesn’t change leaving the track.

Build quality of the interior is phenomenal, as are materials; full leather with unique Turbo stitching is standard in the S, as is the Sport Chrono package.

There’s so much adjustability in the seats, anyone can find a great driving position. And as further proof that Porsche thinks of everything, the climate control system knows whether the top is up or down and adjusts accordingly. 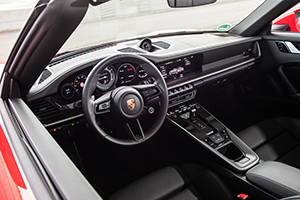 It’s hard to say what our most memorable top down Porsche experience has been over 40 years of road tests, but two definitely stand out. 1994’s striking red on red 911 Speedster, had a combination of vintage style and legendary performance that we couldn’t get enough of.  And that of course, brings to mind the original Porsche, the 356 Speedster.  We actually road tested one of those too, in our 2nd season; even taking in a little off-roading for a picnic by the lake to showcase its versatility.

Government Fuel Economy Ratings for the Cabriolet are 15-City, 20-Highway, and 17-Combined. We found the highway rating easily beatable by just being a little light with your right foot.

Even more than its mind-blowing performance, pricing is what really elevates the 911 Turbo S Cabriolet to another stratosphere; starting at $217,650; $12,800 more than its Coupe counterpart.

It’s quite possible that you’ve grown weary of hearing us sing Porsche’s praises; and to be honest, we find it increasingly difficult ourselves to deliver our opinions without coming across as absolute fan-boys.  Fact is, the latest 911 Turbo is truly a fantastic machine by any measure.

Astounding levels of performance that truly fit its price, delivered in a package that’s easier and more fun to drive than ever.  This 2021 Porsche 911 Turbo S Cabriolet, allows you to experience it to the fullest; whether it’s a fire in your hair track day, or a relaxed wind in your hair romp through the countryside.