The Porsche lineup has certainly gotten a lot more diverse over the last few decades; but through it all their priorities have not changed, performance is still number one!
And for ’21 their Panamera sedan series adds more performance and more diversity, as well as a lot more of just about everything else!

The Porsche Panamera executive car was quite a shock to the Porsche system when it debuted just 11-years ago. Since that time, multiple SUVs and even the all-electric Taycan sedan have been grabbing most of the headlines. So, for 2021, Porsche is giving the Panamera liftback some exciting updates of its own in order to turn a few more heads in its direction. 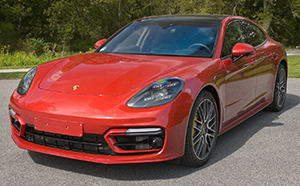 Getting right to the good stuff, the Panamera Turbo gets a new engine. The 4.0-liter V8 twin-turbo has almost completely new internals, as well as upgraded fuel injectors, with a reduced compression ratio, all to jack up horsepower from 550 to 620 in this Turbo S. 37 additional lb-ft. of torque as well, going from 567 to 604!

And no doubt about it, it feels fast as Hades. But also smooth and super composed over any surface; although it remains a very big car with limited outward visibility. So it can be hard to precisely place on narrow back roads.

Still, we appreciate its old-school no nonsense feel; i.e. no electric assist or battery weight to deal with, just persistent, on-tap power.

Oh, and it is hellishly fast at the track too.

It doesn’t so much launch off the line, as explode; and it feels truly surreal to hit 60 in just 3.0-seconds in an all-wheel drive car weighing well over 4,000 pounds.

The engine sounds great, while the 8-speed dual-clutch automatic fires off gear shifts like its life depends on it. The ¼-mile passes in just 11.3-seconds at 125 miles-per-hour.

But it’s not all about high-speed thrill rides; Porsche is also expanding their hybrid offerings by adding a 4S E-Hybrid to the lineup; giving you a 3rd option between the 4 E-Hybrid and the Turbo S E-Hybrid. 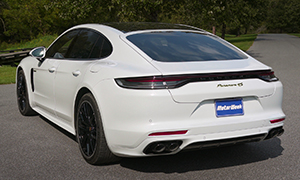 And it turns out, it actually is all about high-speed thrill rides, as the 4S E-Hybrid is almost just as fast the Turbo S.  It’s hard to tell how much electric assist is happening or how much of it is just sheer engine brutality; but ultimately it doesn’t matter, as it arrives at 60 in 3.2-seconds, just 2/10ths slower than the Turbo S.

Same quick and satisfying shifts from the same 8-speed dual-clutch automatic; with a soundtrack that while not as aggressive as the V8, is ultimately more classic Porsche.

Even more impressive, was this assisted-6’s ability to maintain its pace with the Turbo S; as the ¼-mile time was also just 2/10ths off, at 11.5-seconds and 119 miles-per-hour.

And when you’re not chasing ¼-mile times, you can get close to 20–miles of EV-only driving, which is a few more than before thanks to a larger 17.9-kWh battery that will get shared with the rest of the Panamera E-Hybrid lineup.

Even with the added weight of those batteries, the 4S E-Hybrid remains a highly competent cone carver, with well-weighted steering and excellent feedback.  No excessive oversteer or understeer to deal with either, regardless of suspension setting. 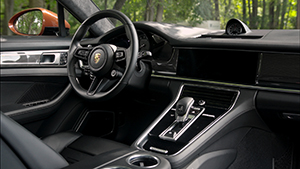 There are some additional updates shared by all 2021 Panameras including making the previously available SportDesign front fascia standard, a new continuous LED light strip across the back of the car, and fresh wheel designs for both standard 20s and optional 21s.

Changes inside are equally minor, but include a new multi-function steering wheel design for most models; the Turbo S comes with its own unique GT Sport steering wheel with leather-covered shift paddles.

Final pricing hasn’t been announced just yet either for 2021 Panamera models, but we expect a slight increase over the current base $88,500. Our 4S E-Hybrid should be well into 6-figures, with the Turbo S a bit more.  And don’t forget, there are also long wheelbase Executive versions, as well as wagon-like Sport Turismos.

From day one, the Porsche Panamera has provided luxury sport sedan performance with the soul of a 911 sports car. Proof that driver enjoyment truly is an integral part of Porsche’s D.N.A. So, for you SUV holdouts out there, who demand long distance comfort, but also desire the engagement and performance that only a true sport sedan can fulfill, the 2021 Porsche Panamera delivers everything you want and more.