The Toyota Supra has barely been back in business a year, and they’re already talking expansion. That's right, for 2021, the Toyota GR Supra has more and less of everything we love.  Now that sounds like a great reason to hit the road and get to know it all over again.

The most significant news for the 2021 Toyota GR Supra is the fact that there’s a lighter, more responsive, and more affordable entry-level 2.0 version powered by a 255-horsepower I4 turbo.

But, being the power-hungry types that we are, we were far more intrigued by the updates applied to the Supra 3.0. 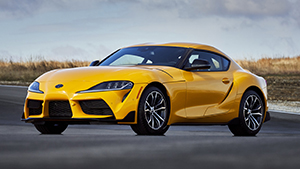 Its inline-6 turbo engine gets an upgrade; with horsepower climbing from 335 to 382, and torque rising from 365 lb-ft. to 368, ratings now more or less on par with its BMW Z4 kin. But, it’s more than just a re-tune or a software update. New pistons lower compression ratio from 11:1 to 10.2:1; and there’s a new cylinder head, with a more efficient multiport exhaust manifold attached.

Toyota also addressed the suspension; not because it needed it, but more to take full advantage of the added power.

Dampers have been retuned, bump stops added, and more structural bracing is in place, tying the strut towers into the radiator support to greatly stiffen the front end.

And of course, all of the software controlling the suspension, steering, active differential, and stability control have been updated to make it all work together.

So, we headed straight for track; and right off the bat, we were able to launch to 60 in 4.1-seconds, 3/10ths faster than last year. Once we got the tires warmed up and started playing with the settings, we were able to drop that down to a “nice” 3.8-seconds.

Max torque kicks in 200 RPM higher than before, yet still at a low 1,800; and it seems to last longer, with power staying flat until it starts to drop off around 5,000. 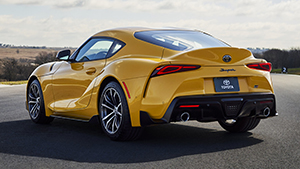 Gear shifts from the 8-speed automatic transmission are fast and firm, whether done automatically, or triggered by the driver, which is actually kind of enjoyable here in the Supra. Same result either way, 12.2-second 1/4-miles at 117 miles-per-hour; also about half a second quicker than before.  Best part of all, it just feels so much faster.

Coronavirus shutdowns hampered our plans for a full track test, so we had to make do with a few runs through our slalom course. It’s hard to say we could feel a significant improvement, but this Supra is a certified cone carver for sure.

Tons of grip, super-quick steering, and great balance had us pushing 50 miles-per-hour through our “slow speed course”.

This is nothing new for the Supra of course. Our history with the Supra goes all the way back to our first season, with what was then known as the Toyota Celica Supra. We found it quick, precise, and effortless through the cones; with exit speeds well above normal, despite being bigger and heavier than a Mustang. And its “boulevard ride” didn’t translate into excessive body roll; just such smoothness that it almost seemed to think its way through the pylons. 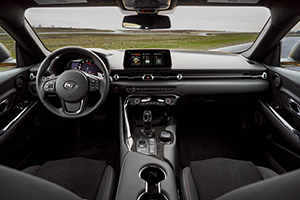 Back to the present, to wrap up a few more minor changes for ’21. The standard 6.5-inch infotainment screen is gone.

All models now get the 8.8-inch version that previously came with Premium trim. There’s a new Safety and Technology Package that includes navigation, upgraded JBL audio, and Dynamic Radar Cruise Control. And finally, the Brembo brake calipers on Premium Supras get a new shade of red paint and a Toyota Supra logo.

The ’21 does use a bit more fuel with the added power. Government Fuel Economy Ratings falling a tad to 22-City, 30-Highway, and 25-Combined. Still, we averaged a fine 26.9 miles-per-gallon on Premium.

We’ve tested 3 different 5th generation Supras over the last 18 months; and have yet to find a reason to be disappointed in the rebirth of this Japanese sports car legend, and our MotorWeek Drivers’ Choice pick for Best Sport Coupe two years running! So, no matter how you spin it, the 2021 Toyota GR Supra remains a performance bargain; and a ton of fun one at that!