When looking for a daily driver to haul your brood and their friends around, it’s hard to beat a minivan. And while they continue to get a bad rap, they also soldier on, being the most practical vehicle on the road. While innovating and changing the segment along the way.  And here’s the latest game changer. The new Toyota Sienna.  All aboard!

As American’s tastes have changed, so too has the most American of all vehicles, the minivan.  No longer just boxy, boring people movers; in order to compete with SUVs, minivans have become more stylish, more efficient, and increasingly more all-weather capable. All without losing the practicality, space, and flexibility the genre is known for. The 2021 Toyota Sienna is the latest next-gen minivan to arrive, and a big part of Toyota’s plan for this 4th generation people mover is enabling a minivan to fit into a wider variety of lifestyles. 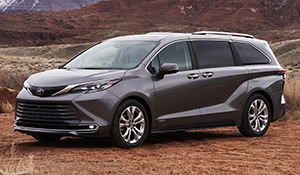 That means you can stick with basic but well-outfitted family transportation with seating for either 7 or 8-passengers.  Or, you can head towards a sporty direction with XSE trim, or opt for the ultimate in luxury with new Platinum fitment; plus plenty of options in between.

The 2nd row captain’s chairs include a super long slide feature for lots of interior flexibility and easy access to the adult-sized 3rd row. It’s split 60/40 and folds quickly into the floor for cargo.

And, lots of extra storage nooks throughout the airy cabin go a long way towards making up for it. The instrument panel is wide, clean, modern, and less driver centric than before. 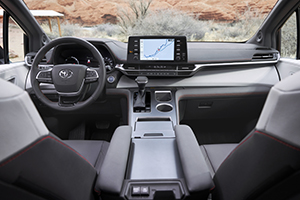 An XSE Plus Package adds wireless phone charging and upgraded JBL audio with navigation on the dash top 9–inch touchscreen.

Another big part of the new Sienna’s master plan was increased efficiency. And for that, not only has Toyota added a hybrid powertrain to the Sienna lineup, but they’ve made it standard across the board, which technically now makes it the world’s largest Prius. And rest assured you can still tow the typical minivan max of 3,500-lbs.

It’s an upgraded version of the Camry’s Hybrid System II; with more power all around.

The 2.5-liter I4 engine increases its output to 189-horsepower and 176 lb-ft. of torque. Twin electric motors add 174kWs of assist, for a total output of 245-horsepower, 37 more than the Camry. Of course it also means there’s a CVT along for the ride. But that’s a small price to pay for great Government Fuel Economy Ratings of 36-City, 36-Highway, and 36-Combined.

All for a much better than average Energy Impact Score; using just 9.2-barrels of oil yearly, with annual CO2 emissions of 4.1-tons.

The Sienna rides on a minivan version of Toyota’s New Global Architecture platform. And, while an all-wheel-drive option is not new to Sienna, the former mechanical system is now replaced with rear electric motor drive like the hybrid Highlander and Rav4. So, less complexity and of course, more efficiency.

Believe it or not, the XSE also gets a sport-tuned suspension; basically, a slight tightening up of the rear multi-link setup with stabilizer bars; though response of the electric power steering is also heightened; it all resulted in much less body roll than the typical minivan. 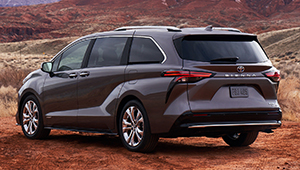 Another surprise was the amount of wheel-spin we had to deal with coming off the line with our front-wheel drive tester. That certainly says there’s more than ample hybrid power.

A 0-60 time of 7.9-seconds is neither rocket-like or a slug, yet clearly points to efficiency being a much bigger priority here.

The CVT keeps power delivery consistent throughout the ¼-mile; with the Sienna finishing in 16.1-seconds at 87 miles-per-hour.

Now, it wasn’t long after Chrysler introduced their minivan to the world, that Toyota had a quick response, with the expertly-named Toyota Van...need to change the oil? Just flip up the driver’s seat.  Shortly thereafter, Toyota got more serious with 1991’s Previa, and ultimately on to the Sienna in 1998 when minivans officially became not so mini. It’s been all family friendly since.

Say what you want, for the ultimate in family versatility, it’s hard to beat the minivan.  And while SUVs have certainly taken over family hauling duties for the majority of American households, modern minivans, like this 2021 Toyota Sienna, continue to prove that for most families, they’re the better and smarter choice.