Quick, what is the best-selling luxury 3-row utility vehicle of all time?  Time’s up. It’s the Acura MDX, with over a million on the road since it arrived for 2001. So let's find out what makes the MDX so popular, and what Acura has done to make it ever more so for 2022.

These days, SUVs have a lot on their well-sculpted shoulders; especially in the luxury ranks, where they need to not only offer lots of actual utility, but increasingly tend to be the flagships for their brands.  Which means bringing new technologies, and ratcheting up both features and performance. This all-new 2022 Acura MDX looks to be up for the task. 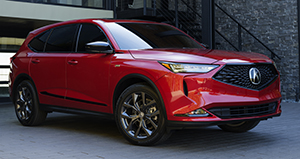 The MDX story started in 2001, arriving at a time when the unstoppable popularity of SUVS was filtering its way up to luxury brands, aided by a robust economy.  So quickly was this happening, that many were taking the “badge-engineering” approach. Not Acura, they envisioned something truly different for the segment; a “near perfect balance between a sophisticated sedan and capable sport utility.” In our 20th season Road Test, we called it “one of the smoothest running and handling SUVs on the planet.”

Flash forward to 2022, and this 4th generation MDX sees perhaps its biggest transformation ever; yet as we’ll see, not much has truly changed.

This all-new platform is more rigid, and stretches the wheelbase by almost 3-inches.

Virtually every exterior measurement has increased, and the front wheels have been pushed farther forward, lengthening the hood to give a much more athletic profile.

As for tech, you’re greeted with lots of it as soon as you hit the silver start button, with Acura’s Precision Cockpit coming to life. It’s the first fully digital display for the brand, and it’s standard on the MDX.

For infotainment, there’s a 12-inch dash-top screen; not only with full Apple CarPlay and Android Auto integration, but Alexa is along for the ride too.

The center console and most controls are all very similar with the TLX sedan; which means a touchpad controller for AcuraLink. It’s fine when you’re parked and sitting still in the car, but trying to focus on the road while concentrating on the touchpad and looking at the screen can be difficult, especially on bumpy roads. Use does improve with familiarity, but we tend to only use it when absolutely necessary. 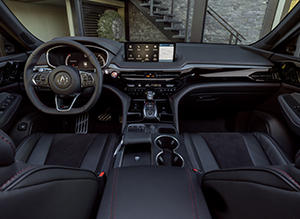 On to more practical matters; there’s more space inside for all 3-rows and 7-passengers. Comfort is as good as it always has been, while functional improvements are in place to make your life easier.

The second row middle seat can either fold down into a console, or be removed entirely.  So, you don’t have to choose between bench or captain’s chairs, Acura gives you both.

Not only is there 2.4-inches of additional legroom in the 3rd row, but seat bottoms are higher for a more comfortable seating position.

A 3.5-liter V6 has been part of the MDX picture for most of its existence, and that continues here; output remains 290-horsepower and 267 lb-ft. of torque, but there are some slight revisions, mainly to reduce emissions along with noise, vibration, and harshness. The MDX will soon join the turbo ranks when a new Type S arrives this summer with a 355-horsepower 3.0-liter V6 turbo.

One more gear has been added to the automatic transmission, which is now a 10-speed.

Going full-speed at our test track, the MDX delivered consistent power with just the right amount of throaty exhaust noise. 0-60 was a good 6.4-seconds; with the ¼-mile taking 15.2 at 92 miles-per-hour.

With this new platform, comes a new suspension setup; the rear remains a multi-link, but the whole sub-frame has been redesigned to be more compact and provide better isolation from the cabin. While up front, is an all-new double wishbone design replacing the MacPherson struts of the previous gen. You don’t necessarily have to upgrade to Super-Handling all-wheel-drive, but you won’t regret doing it; as it helps the MDX handle better than some sport sedans. 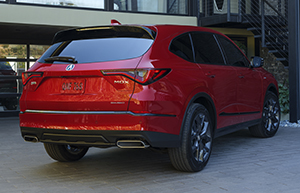 Government Fuel Economy Ratings are 19-City, 25-Highway, and 21-Combined; we averaged a good 22.5 miles-per-gallon of Premium.

Those ratings equate to a just slightly below average Energy Impact Score; 15.7-barrels of annual oil use, with 7.0-tons of CO2 emissions.

Having said all that we have about the MDX, probably the biggest reason for its continued popularity comes down to value.  Point of entry undercuts most rivals at $47,925. Super-Handling All-Wheel-Drive is a $2,000 option for the base model, and comes standard with A-Spec and Advance trims.

Those quickly drawn to the latest attention-grabbing shiny wheeled object of desire may be disappointed. Clearly the 2022 Acura MDX is not that type of vehicle.  It’s much more about substance, and there’s loads of that on tap here. Current MDX fans will love the upgrades, and all Acura owners will soon benefit from the halo effect the new MDX brings to the brand.