A Supercar in Sedan Clothing

No one can argue with the fact that the BMW M3 is a highly potent track weapon. But in the interest of “competition,” there’s an M3 that takes things to yet another level.  And, you guessed it, it’s called the M3 competition.  Well, not everyone here at MotorWeek gets a trophy, so let’s hit the track and see what the competition has to worry about to keep up with the M3.

Competition is nothing new for BMW’s M3, as it has been battling intenders and pretenders ever since it arrived on the scene in the mid-1980s. The current generation 3-series sedan arrived for 2019, with the high-performance M3 variant arriving 2-years later. 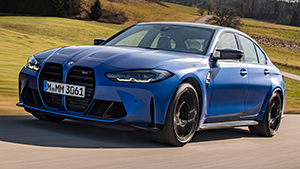 For 2022, BMW continues to deliver something extra for hardcore enthusiasts with deeper pockets: the M3 Competition xDrive. Yes, xDrive is in the name for a reason, as this is the first-time buyers can get 4-wheel traction in an M3, and it is available exclusively on the Competition model.

BMW promises the all-wheel-drive system is not a hindrance to go fast, but is in place to help you exploit the M3’s power to the fullest. And not only is power being shuffled front to back, but side to side with BMW’s Active M Differential; all deliveries filtered through Dynamic Stability Control. Rear-biased by default, 4WD Sport mode sends even more power to the rear; while shutting off DSC completely allows for rear-wheel-drive only.

In addition to all-wheel-drive, Competition models add more power; a 30-horsepower jump from 473 to 503; more significant is the added torque, a leap from 406 lb-ft. to 479. Do note; 8-speed automatic trans only.

Still, it all works together to provide a supercar-like launch. No hesitation, no turbo lag, no nonsense; just grip and rip to 60 in only 3.4-seconds. Shifts are impressively quick and precise, with a ¼-mile of 11.6–seconds at 121 miles-per-hour. Now, you would think that with that speed, and all of that additional torque, there’d be some level of ferociousness here. Or, even some rough edges, but it’s all typical ultra-smooth BMW power delivery. 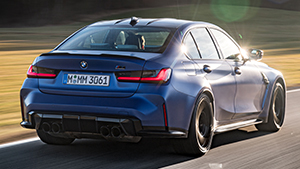 The numbers, as well as the sense of speed, are palpable. We’ve driven cars with 100-more horsepower that don’t feel this quick. It’s not out of control fast-- quite the opposite; just locked-down, arrow straight, and extremely fast.

As for the all-wheel-drive application on the rest of the track, there’s a fine line between being ultra-responsive and hyper-jittery, and the M3 Comp seems to fall on the right side of that line most of the time. Though BMW’s ever-present lack of steering feel does not help matters. But boy does this thing fly around a race track. What it lacks in steering feel, it makes up for with seat of the pants chassis feedback, as well as sheer intuition, as it seems to know the best way to get through corners, and will baby you through them with as much or as little electronic help as you need.

It’s an extremely capable car, with phenomenal handling abilities thanks to a nice tight suspension, and the ability to loosen up the rear no matter what drive mode or settings you’re in. Yet accomplishes all of that without feeling overly harsh or stiff. Of course, the all-wheel-drive hardware only adds weight to the already hefty M3; but the M Compound brakes are pretty darn impressive with their ability to scrub speed in a hurry, without getting out of sorts no matter how hard we pounded the pedal. 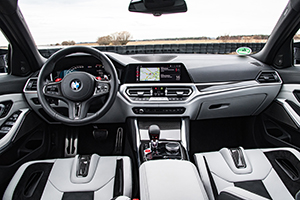 The paddle shifters work pretty well, but left in auto the M3 seems to be on the same page with us; up and downshifting at the appropriate points on the track, and holding gears steadily through corners. Through all of its supercar-like performance, the M3 remains a super practical vehicle with plenty of passenger and cargo space to be the ultimate daily driver sedan. Though if that is your priority, you might not want to opt for the available M Carbon bucket seats.

Looks are always subjective, and the latest 3-series is certainly an acquired taste; but I think we can all agree the muscular stance and aggressive nature of the M3 Competition makes it much more likable.

Off track Government Fuel Economy Ratings are 16-City, 22-Highway, and 18-Combined. That’s a much worse than average Energy Impact Score, consuming 18.3-barrels of oil yearly with 7.9-tons of CO2 emissions.

Competition xDrive pricing starts at $78,095, which sounds like a lot, but it’s only 7-grand over a standard M3; making it an easy choice if you plan on taking in some track days.

Competition can bring out the best in people, and it can also inspire carmakers like BMW to keep pushing boundaries. The 2022 BMW M3 Competition xDrive is a supercar in sedan clothing, making it an extremely difficult challenge for their competition to match.