Much like bigfoot, for years now we’ve been hearing tales of a mythical creature known as the Cadillac Blackwing. A literal fire-breathing beast so ferocious it strikes fear in the hearts of both lesser sedans and road courses all over the land.  Well, won’t you join us now as we hit the track in search of the truth about the Blackwing?

There are two Cadillac Blackwing sedans available, a compact CT4-V and a midsize CT5-V. But considering Roebling Road Raceway is a big track that can easily handle big horsepower, the choice for us was obvious; the 2022 CT5-V Blackwing.

Its 6.2-liter supercharged V8 cranks out 668-horsepower and a whopping 659 lb-ft. of torque. Assembled at the Bowling Green Corvette plant; it features titanium valves, forged pistons, and Rotocast aluminum heads to make sure that it’ll hold up to some serious abuse and help make this Blackwing the most powerful production Cadillac ever...and also the fastest!

Off the line, it’s everything you want it to be: explosive with power, requiring right foot restraint. But, it actually doesn’t take as much patience as you’d think waiting for the special compound Michelin Pilot Sport 4S 305s to get good traction. We hit 60 in 3.6-seconds on just our second run.

Sedans in general are rare enough these days, but one with that kind of power and a manual transmission, we’re talking more unicorn status here. The standard Tremec 6-speed gets a twin-disc clutch and a short-throw shifter, both of which were a mechanical joy to operate as we worked our way through the ¼-mile in 11.7-seconds at 124 miles-per-hour.

An available 10-speed automatic is 2/10ths quicker to 60 according to GM, but we had bigger things our minds; getting through all of Roebling’s 9 turns as fast as possible.

If you’ll remember, the CT5 shares a chassis with Chevrolet’s Camaro, so it’s more than track-worthy right from the get-go.  But significant updates have taken place to push the Blackwing into world-class sport sedan territory. Starting with faster-responding Magnetic Ride Control 4.0 and the biggest brakes ever bolted onto a production Cadillac. The structure itself has also been stiffened with shock tower braces, beefier rear cross members, and added chassis reinforcements below. 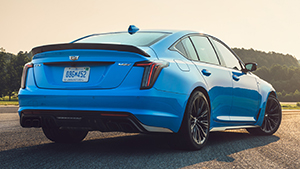 Steering response is quickened due to the retuned hydro bushings and cross-axis ball joints of the MacPherson strut front suspension; same treatments in back, with the addition of stiffer knuckles and cradle mounts for the 5-link suspension. The electronic limited slip rear differential gets a lighter aluminum housing, improved cooling, and optimized control for both sending more power across the axle and proportioning it uniquely dependent on drive mode.

Still, at times you can feel like you’re fighting with it a bit going around the track, as the fronts could use a little more grip to dial back some of that initial understeer, which can easily be overcome with all of that glorious mid-range torque; but we’re not afraid of a little manhandling, as this Blackwing stays pretty flat; feeling darn fast and highly capable.

Whether it’s the Performance Traction management, or just the amount of mechanical grip provided by the setup, even with all of that power, major oversteer is not a naturally tendency.

At the risk of sounding trite, perhaps the best way to paint the CT5-V Blacking picture is to portray it as the well-mannered offspring of a Hellcat Charger and BMW M3. 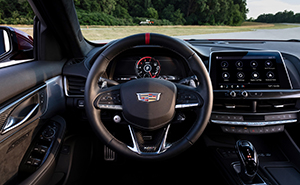 It sure looks like one mean Cadillac; the stance is just about perfect, and a pair of optional carbon fiber packages add the material to the front splitter, wheel arches, rear spoiler, grille, rocker extensions, and rear diffuser.

Plenty of carbon fiber inside too, including on the available racing seats; though we found their leather covering to be a little slippery out on the track. There’s a 10-inch touchscreen for infotainment, plus a 12-inch configurable instrument cluster which can display info from the available 2nd gen Performance Data Recorder.

In normal street use, Government Fuel Economy Ratings are 13-City, 21-Highway, and 15-Combined.

While everyone loves the idea that Cadillac was able to not only make a world-class sport sedan, but one that’s insanely beastly; not everyone will be able to enjoy it, as pricing starts at $84,990, and you can easily clear 6 figures with options.

Cadillac has already said that there will be no more gasoline powered V-cars; the upcoming Escalade-V SUV notwithstanding. The brand’s future is destined to be all-electric. What a shame to get cars like the Blackwings just about perfect only to have them exit stage left! So, let us enjoy this remarkable series, our MotorWeek Drivers’ Choice Best Sport Sedan pick, while we can. And, hope that the spirit of our 2022 CT5-V Blackwing will live on in some future Cadillac EV super sedan.