If the future of driving is indeed battery electric vehicles, we’re going to need a lot more choices than just odd-looking hatchbacks and super-expensive luxury cars. Now, Ford knows this, and is electrifying the longtime best-selling vehicle in America, the F-150.  And this is how lightning strikes!

After rocking the car world by introducing a fully-electric Mustang SUV, the Mach-E, Ford turned their BEV efforts to the F-Series light duty pickup. And here’s the result: the long-awaited 2022 Ford F-150 Lightning. It’s finally here and is fully-charged to help Ford change the pickup game once again. 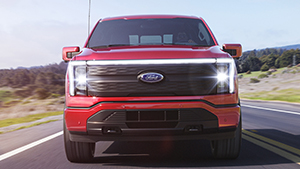 Distinct, but not different is the styling theme. No flashy 6-figure showcase to drum up excitement here; think of it more as just another aluminum-bodied F-150 that happens to have a plug. Not only does that keep it familiar, but surely helps them when it comes to keeping prices reasonable. It’s hard to miss the distinct LED lighting, but look closer and you’ll see three new trim-specific grille designs. The hood and running boards have also been reshaped to create the most aerodynamic F-150 ever. For the time being, all Lightnings come in SuperCrew form with the 5½-foot bed, and both cab and bed dimensions are exactly the same as the regular F-150.

Two battery packs are available; standard range good for 230-miles, and extended range which stretches it to as much as 320, just shy of GMC’s Hummer EV Pickup’s 329. Onboard computers give accurate real time mileage estimates; taking into account not just the usual things like driving style and payload, but weather and traffic, too. Plus, available Onboard Scales estimate the weight of anything you’re towing and factor that in as well. Charge times vary greatly based on what you’re plugged into; but at best, 150-kW fast charging adds more than 50-miles in just 10-minutes.  Level-2 at-home charging is more in the neighborhood of 13-20 miles per hour.

Not having to stop for gas is just the start of the benefits to going electric. There’s a huge 14.1 cubic-ft. “frunk” storage area where the ICE engine would be, and if the Lightning is plugged into your home with the available Ford Charge Station Pro; if the power goes out, your Lightning will keep the household current flowing with 9.6-kilowatts of power for up to 3-days; possibly longer, if you power just the necessities. 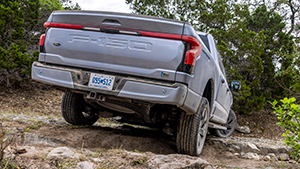 Another big departure for the Lightning is its independent rear suspension design, which smooths out the ride and still allows for a 10,000-lbs. tow rating, thanks to the battery-encompassing frame which has the strongest steel ever used for an F-150.

While not exactly Raptor-spec, from our early drive time in Texas, we found the Lightning plenty capable off-road. Its instant torque was incredibly useful for easily and silently crawling over large obstacles. Plus, the electronic-locking rear differential helped provide the traction where we needed it most while navigating deep ruts, climbing rocky inclines, and even conquering a mud pit.

Even the regular F-150 can border on tech overload, so it doesn’t seem all that vastly different inside. There is a big SYNC-enabled 15.5-inch touchscreen front and center; with a graphic intensive 12-inch digital instrument cluster for the driver. Same spacious feel both up front and in back as all other F-150 SuperCrews, with just about every feature available like the fold-out Interior Work Surface and Max Recline Seats.

So, what’s this Lightning like to actually drive?  Well, at the risk of sounding like a broken record, it’s pretty much just like a regular F-150, only quieter and with big lumps of near-instantaneous torque. All of those batteries do bring some serious weight with them, which gives the F-150 even more of a tank-like heft; and, of course, being mounted as low as they are helps it feel increasingly well-planted in corners. 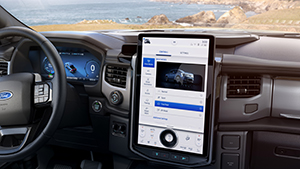 Those worried about Ford doing damage to the Lightning name have nothing to worry about, as this one hits 60 in the mid 4-seconds, which is about a second quicker than the last SVT Lightning.

Most of you will remember the original F-150 SVT Lightning, a high-performance sport truck that changed the pickup game forever. That became sort of business as usual for Ford, as they shook things up again with the Raptor off-roader, next all-aluminum bodies, and then even got truck people to buy into turbo gas engines.

Well, Ford is raising the bar once more, with the now all-electric 2022 Ford F-150 Lightning. Yes, Lightning has indeed struck yet again.