No doubt Ford unleashed a whole new kind of performance truck when the SVT Raptor arrived for 2010.  The 2nd-gen Raptor entered for 2017, more capable in many ways, but with a twin-turbo v6 instead of a monstrous v8.  Well, now it’s on to the 3rd generation. So, let’s see what surprises Ford has in store this time! 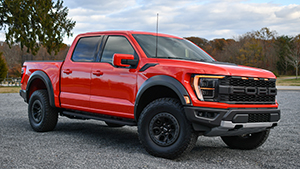 For most of its first two generations and 10 model years, the Ford F-150 Raptor existed without any real competition. That changed last year with the arrival of the Ram 1500 TRX.  So naturally, Ford felt a need to up their game, and had a new F-150 platform to build upon.

The biggest departure for this 3rd-gen Raptor is in the suspension setup, where it swaps the F-150’s leaf springs for some coils, helping the rear stay better in line during high speed desert runs. Delivering a smoother ride in daily use is a side benefit, too, as is less weight. The front suspension also gets beefed up a bit, as well as slightly altered geometry. Plus, the 3-inch Fox shocks deliver an inch of additional travel over last year for both front and rear.

Attached to the suspension are 17–inch wheels with 35-inch BF Goodrich T/A KO2s as standard, but 37s are now available; done no doubt to keep up with the TRX. Regardless of which tires are fitted, you certainly have a commanding view of the road. 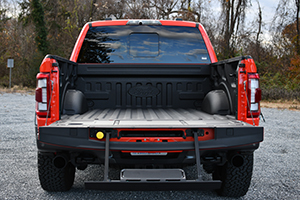 And we talked suspension first because there’s not much under the hood to discuss. Same engine as before, with 450-horsepower and 510 lb-ft. of torque, but the 3.5–liter twin-turbo V6 is tweaked to be a little more responsive, as well as deliver better low-end torque. And, it gets a new 3-inch active exhaust system with Quiet, Normal, Sport, and Baja modes. Most agree, at its most aggressive, it sounds much better than before, but it’s still no V8, and still totally out of place in a vehicle such as this. The 702–horsepower TRX will reign supreme for now in regards to powertrain; at least until the Supercharged V8 Raptor R arrives later this year. Same 10-speed automatic, but updated to provide quicker shifts; and revised gearing allows for towing an additional 200-lbs.; 8,200 the new max.

With all of that off-road hardware, there’s a compromise to be had on the street; but the Raptor is not too bad at all for daily driving and even managing city streets. It’s a fact that you seem to see Raptors everywhere you go these days. And with the additional stability of that rear suspension, Ford felt comfortable to up the top speed limiter from 107 to 120. As for getting to 60, it was off to our Mason Dixon Dragway proving grounds to see if the minor powertrain tweaks were able to make it any quicker. 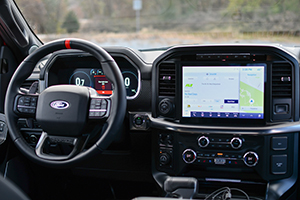 Throttle response is immediate, and power still comes on like a wrecking ball right from the get go; but it actually took us a tenth of a second longer to hit 60 than before, at 5.9-seconds. Shifts from the 10-speed automatic are so smooth you can barely feel them; and whether it’s quicker shifting here, or the more consistent torque delivery, it quickly made up that deficit and then some, with a ¼-mile time that was actually 2/10ths quicker than before, at 14.3-seconds and 95 miles-per-hour.

Anything that sits this high off the ground is never going to feel glued to it, but if you have any experience driving lifted big-rigs through a cone course, you’ll know this one’s not too bad at all, especially if you tighten things up in Sport mode. Steering is very light, and it requires a lot of input, but the Raptor itself definitely feels heavier than the TRX.

As for now, all Raptors are SuperCrews; no more SuperCab; and between all of the updates and inflationary pressures, base pricing sees a significant increase to $67,070.

In its current configuration, the 2022 Ford F-150 Raptor may not be able to match the TRX when it comes to horsepower, but it’s still a fantastic overall package, imposing to look at, while being faster than a whole lot of sports cars. It’s even a little more fun than many of them too.