Honda’s Biggest Hit Ever, Redefined for a New Generation

For nearly 50-years, the Honda Civic has embodied safe, reliable, entry-level family transportation. Along the way, both fun and frugality have added variety to the mix. So, let’s find out what’s next, as an all-new 11th generation Honda Civic hits the streets.

Much like an aging pop-star that is constantly reinventing themselves to stay relevant, the Honda Civic has had some major hits over the years as it changes with the times; yet through it all, has stayed true to its practical core. For 2022, the Civic is more modern, efficient, and stylish than ever; ready to please a whole new generation of fans. 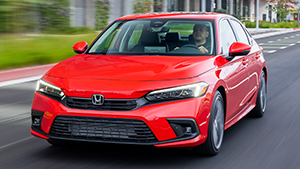 As is usually the case, the traditional 4-door sedan is the first to arrive; with a hatchback, along with Si’s and Type R’s, to follow.

The exterior design has been simplified; definitely more eye-catching and perhaps a little sportier than before, with an altered profile due to the long and low hood, pulled back A-pillars, mirrors now mounted on the doors, and 1.4-inches of additional wheelbase.

The user experience is an increasingly important part of vehicles today, introducing as much tech as possible without being distracting or difficult to use. Honda has performed this task quite well in the new Civic.

They’ve been using digital speedometers for some time now, but up their game here to a fully digital 10-inch LCD instrument panel; though as of now only in Touring trim, which also adds first time Bose audio, wireless phone charger, and wider leather seats.

The infotainment screen is mounted high, on top of the very linear dash; 7-inch screen is standard, 9-inch with upgrades.

Rising to meet that dash, is a substantial center console with a traditional-looking shifter, and plenty of storage space. 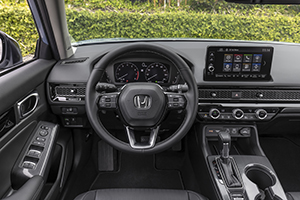 Passenger space is virtually identical to last year, and we found our car’s split folding rear seats more than roomy for commuting adults. At 14.8 cubic-ft., there’s actually a little less space in the trunk than before, but its still generous.

The new Civic features a stiffer structure, and that generally means more substantial road feel; and indeed that was noticeable, having a more European presence than ever. Both the standard 158-horsepower 2.0-liter I4 and optional 1.5-liter turbo-4 get upgrades for ’22. The naturally-aspirated 2.0-liter’s is more along the line of increasing efficiency; while the turbo gains 6–horsepower to 180, and 15 lb-ft. of torque to 177.

Our test car was packing the 1.5-liter turbo; and we put it to the test right away at Mason Dixon Dragway. There was a bit of turbo lag at launch, but once the power hits, it hits pretty hard, and stays consistent throughout the ¼-mile.

Regardless of engine, a CVT manages power flow, and while Honda’s is better than most, the extended high rpm whine does detract from the overall experience.

It resulted in the Civic staying completely glued to the pavement through our slalom course. Surprisingly little body roll, only minor understeer, and very quick response from steering inputs.

Overall, quite nimble and competent; but more importantly, a great base for Si and Type Rs to build upon. 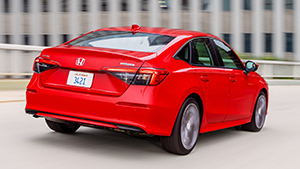 In braking runs, short stops from 60 of just 109-feet were accompanied by some fairly aggressive nose dive; but stops were fade free and very consistent.

Civic has always been about safety; the major addition this time, is a new airbag design for the driver, fashioned to reduce brain and neck injuries by reducing head rotation.

This joins standard knee airbags and rear seat side impact airbags; and of course Honda Sensing is upgraded to the latest specs.

Government Fuel Economy Ratings for the 1.5 turbo are 31-City, 38-Highway, and 34–Combined.  We averaged a very good 34.2 miles-per-gallon of Regular. That makes a well better than average Energy Impact Score, with use of just 9.7-barrels of oil yearly, and 4.3-tons of CO2 emissions.

Some may criticize Honda for mostly playing it conservative with everything they do. But our take on it is, they just keep playing the hits; you know, the very reason everyone shows up in the first place. The 2022 Honda Civic is just that, Honda’s biggest hit ever, redefined for a new generation.