As Kia continues to expand their SUV lineup, their midsize stalwart Sorento made a move to regain some of the flavor of the rugged original when the 4th generation arrived last year. To us, that made it even more desirable; but, it turns out that was just a starter, as it’s become a lot more efficient, too, with this Sorento Hybrid.

Making an already great vehicle even greater is a great way to grab our attention; and that’s just what Kia has done with this 2022 Sorento Hybrid 3-row crossover utility vehicle. 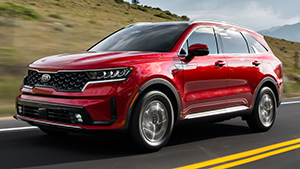 Kia has been in the hybrid game for quite some time, so it’s no surprise the Sorento’s powertrain is smooth and well-sorted; yet also quite punchy, both from a dead stop and for highway passing. And, not only is it significantly more powerful than the Sorento’s standard naturally-aspirated 2.5-liter I4, it’s loads more efficient. Kia mates a 177-horsepower 1.6-liter turbo-4 engine with a 44-kW motor to deliver a total of 227-horsepower and 258 lb-ft. of torque.

All-wheel-drive is optional on the Hybrid, though we stuck with front-wheel-drive to maximize efficiency, not to mention appreciate its diesel-like ability to travel well more than 600 miles on a tank of gas. Government Fuel Economy Ratings are 39-City, 35-Highway, and 37-Combined; though we were certainly on the low end of that, with a 35.7 miles-per-gallon average on Regular fuel. Still, the Energy Impact Score is far better than average, with 8.0-barrels of annual petroleum consumption and just 4.0-tons of CO2 emissions. There’s also a plug-in PHEV hybrid available which not only gets more power from a larger electric motor, but a bigger battery to deliver up to 32–miles of EV driving.

We continue to applaud Kia’s use of a true 6-speed automatic transmission and not a CVT; though in operation, it does hesitate a bit at times to downshift, wanting to rely on the electric motor first and then dropping a gear or two when reinforcements are needed. It’s the only detractor from the very smooth driving experience that mixes a borderline-floaty highway ride with competent cornering.

Not much else is different from the Sorento we tested last year when this gen debuted; it still feels incredibly spacious and Kia continues to include unexpected features like a rear wiper that engages automatically whenever you select reverse, and even the huge 10-inch touchscreen is standard equipment. 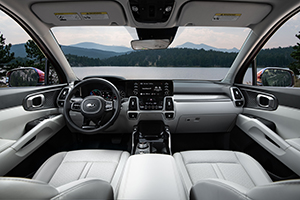 3-row seating is standard as well, with your choice of setups for either 7 or 6-passengers. Our tester’s 2nd row captain’s chairs were very comfortable, but no matter where you were sitting, it’s a quite pleasant experience; all of the creature comforts you expect, with nothing overly complicated to figure out. Plenty of storage space, too, as even behind the 3rd row there’s a decent 12.6 cubic-ft., expanding to 45.0 cubic-ft., and maxing out at 75.5 with all seatbacks folded. Gauges are fairly traditional looking with an analog speedometer, small central info screen, and a power-meter on the left replacing the tach.

For now, the Hybrid is only available in mid-level S and EX trims, but our EX’s fittingly named Runway Red paint job is more akin to what we usually see on a luxury car.  And may even be enough to allow you to sneak into the Whole Foods parking lot without feeling out of place.

Nothing really sets the Hybrid apart in appearance, which is fine by us; same LED-equipped tiger nose front, chiseled body, and expressive C-pillar motif as the rest of the Sorento lineup. EX comes with standard roof rails and 17-inch wheels.

Off to Mason Dixon Dragway to search for the other side of this hybrid powertrain’s performance. 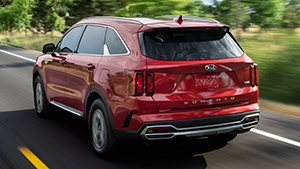 It hops off the line with impressive EV power, delivering quite an aggressive launch; chirping the tires a bit, and even trying to torque steer on you as you sprint to 60 in 7.3–seconds. Power delivery stayed very consistent down the track through a 15.5-second ¼-mile, ending at 92 miles-per-hour.

Built on the K5’s capable N3 chassis, the Sorento Hybrid is very light on its feet for a vehicle of this size. Steering too is light, but not vague at all. The regen brakes have an impressive almost natural feel to them, and good stopping power too, though we did experience some fade after a few runs. We rate its 115-foot stopping distance as good.

There isn’t much downside to stepping up to the 2022 Kia Sorento Hybrid, other than it not being able to tow quite as much as the 2.5-turbo with the towing package. That aside, the Sorento Hybrid is not just a more fuel efficient Sorento, but all around, the best Sorento value.