A Grand Cruise Worth Considering

Lexus buyers are certainly accustomed to the finer things in life; and when it comes to the utility vehicles in their lineup, it doesn’t get any finer than the LX. It’s the over-the-top version of Toyota’s iconic Land Cruiser, an SUV with a global reputation for serious off-pavement capabilities. So, let’s find out how they pack all that and more into the new 4th-gen LX.

Redundancy is sometimes a good thing, and sometimes not. When it comes to luxury-minded off-roaders, Toyota has for years offered the truck-rugged Land Cruiser along with a Lexus version called the LX. But, Americans have never embraced the Land Cruiser as much as the rest of the world, and the vast majority of SUVs today are car-based. So, with budgets ever-shrinking, Toyota has decided to suspend importing the Land Cruiser here, making this 2022 Lexus LX 600 the first without a Land Cruiser counterpart. 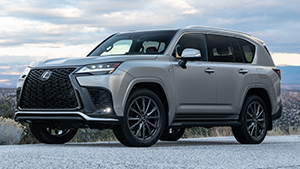 And while the LX doesn’t have quite the same global reputation to fall back on, most U.S. buyers in this segment are primarily looking to be pampered and may flaunt some go-anywhere cred along with it.

How you feel about the interior depends a lot of what your prior experiences are. If you’re coming from another brand, you’ll probably be blown away, but if you’re an LS sedan owner looking to make the SUV switch, you may be a little disappointed, as it doesn’t have quite the same level of polish. But there is a sweet “cool box” in the center console and plenty of places to plug things in, plus lots of storage space, dual-display infotainment with good controls, and an abundance of real knobs and buttons, along with a great-looking pair of entertainment screens for rear seat passengers.

Front seats aren’t overly-plush, but are vacation comfortable; same for the 2nd row, with plenty of legroom, too. 4, 5, or 7-passenger versions are available, as well as plenty of options for taking the interior into a sportier or more luxurious direction. If so equipped, 3rd-row seats tuck away smartly to maximize cargo space which goes from 11 to 46 cubic-ft. with them stored; and ultimately a max of 64 with 2nd-row folded.

The ride is incredibly smooth for a big body-on-frame utility, aided by a new platform Lexus claims is 20% more rigid than before, despite this LX being more than 400-lbs. lighter. And while that didn’t quite translate to a nimble handling course experience, the LX’s front high-mounted double-wishbone, and rear 4-link suspension, have been overhauled to provide additional stability at speed. There’s more travel to the suspension than before, too, which contributed to the copious body roll; but of course, the major benefit to that is better off-road performance, which the LX has indeed improved upon. 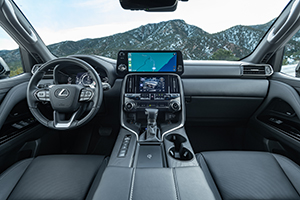 There’s underbody armor for protection, and Multi-Terrain Select integrates Crawl Control with settings for Dirt, Sand, Mud, Deep Snow and Rock. It’s been upgraded to work in high range and not just in 4-low. These are just a few of the goodies that will help you get out of most situations you might find yourself in off pavement.

No more V8 under the hood, but it has been replaced with a fantastic twin-turbo 3.5-liter V6 that feels plenty powerful; and indeed its 409-horsepower and 479 lb-ft. of torque are both significantly higher than the previous 5.7-liter 8-cylinder. At our Mason Dixon Dragway testing grounds, that equated to sprints to 60 of just 6.2-seconds. It launches with much more grunt than your typical leather-clad luxury SUV, and power really pours on as RPMs climb. Shifts from the 10-speed automatic are so smooth and quick, you really have to pay attention to even figure out when they’re happening. It all comes together for a 14.5-second ¼-mile at 97 miles-per-hour. It was hard to ignore the sheer size of this beast in our braking test, as it felt a bit like a bucking bronco at times, but the actual brakes seemed unfazed by it all, bringing us to consistent stops in just 119-feet. 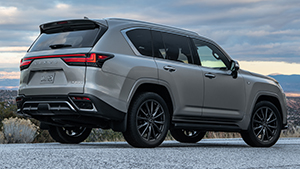 No matter whether it’s streaking down the track, or sitting still, the LX600 sure looks like a big chrome-clad bruiser. It’s all grille up front, with very truck-like proportions and aluminum is now used for many body panels.  Wheelbase remains the same as it has since the first generation, at 112-inches.

With standard 4-wheel-drive, Government Fuel Economy Ratings are 17-City, 22-Highway, and 19–Combined; we averaged a spot-on 19.2 miles-per-gallon of Premium. That makes for a worse than average Energy Impact Score, using 15.7-barrels of oil yearly, with 7.9-tons of CO2 emissions. Pricing starts at a lofty $88,245 and climbs steeply from there, topping out at Ultra Luxury trim for $127,345.

The Lexus LX has always been the ultimate Land Cruiser, and now the 2022 LX 600 is the only one for us here in the states. So, if you’ve got the dough, that alone makes it one Grand Cruiser truly worth considering.