Like most luxury brands these days, Lexus has a full lineup of SUVs; but, unlike most, it was their parent company Toyota that really kicked off the crossover craze here with the 1995 RAV4. Yet, it took them until 2015 to release a true Lexus version of the RAV: the NX, which now begins its 2nd generation.

Just what makes a Lexus, anyway? Well, one of the major things you notice when stepping up from Toyota to their Lexus luxury division is the calmness and serenity of the interior. That’s something this 2022 NX has in spades. 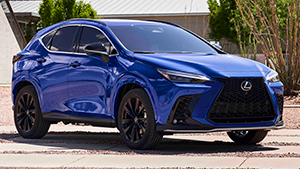 It makes even sitting in stop-and-go traffic a much more pleasant experience. Sitting still is also a great time to get to know the posher interior. The NX’s new multimedia system feature’s up to a 14-inch screen. The screen is not only big, but very clear, responsive, and easy to navigate, while also eliminating our memories of the brand’s indecisive touchpad. A Lexus definer that we can’t wait to forget.

Bigger news for the NX, and for the Lexus brand in general, is their first plug-in hybrid. This 450h+ combines a naturally-aspirated 2.5-liter I4 engine with 3 electric motors, and an 18.1-kWh battery for a 302-horsepower total output, and up to a great 37-miles of pure EV driving. Charging takes about 4½-hours, unless you upgrade to the 6.6-kW onboard charger, which shaves that down to 2½-hours. If all of that sounds familiar, it’s very similar to the Toyota RAV4 Prime.

The PHEV may sit at the top of the lineup, but there’s also a 239-horsepower 350h traditional hybrid, as well as two non-hybrids. A 275-horsepower 2.4-liter turbo-4 in the NX350, and a naturally-aspirated version of the hybrid’s 2.5-liter with 203-horsepower in the NX250. Working with the RAV4 Prime powertrain, we were primed the for 1/4-mile with this 450h+ at our Mason Dixon Dragway test track.

Needless to say, it’s the quickest NX yet; squatting down and pouncing off the line with authority, the electric motors delivering the additional torque needed to get to 60 in just 5.6–seconds. The eCVT transmission is also the same as the RAV4 Prime, and likewise one electric motor is integrated into the rear axle providing standard all-wheel-drive. Smooth, steady, and very quiet throughout the 14.2–second ¼-mile at 98 miles-per-hour. 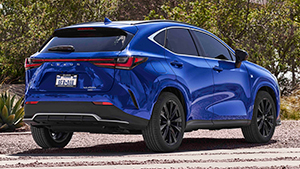 Like most Lexus’, it was clear in our handling course that comfort and safety are the priorities. But the all-wheel-drive setup is there to assist with handling just as much as provide all-weather grip. Lexus also made a point of lowering the NX’s center of gravity, and the 450h+’s battery weight certainly helps. An available F SPORT Handling package will help even more, adding Active Variable Suspension and upgraded performance dampers; though most Lexus buyers will probably not be on board with the firmer ride that it brings. Steering is very responsive and seems to hit that “just right” middle ground of being not too light or too heavy. Brakes are a little touchy in everyday traffic, and the ABS pulsing brings a lot of noise with it; but they performed great here at the track, stopping us from 60 in 112–feet.

Lexus is also known for its expressive yet elegant styling. The look of the new NX doesn’t change drastically, yet the revised spindle grille is in your face more than ever. The 2022 NX is both longer and wider, but not lower, as it’s actually an inch taller; that means a little more room inside, which seems to go to storage space rather than people space. The hatch covering that cargo space now sports big Lexus lettering as well as new full-width tail lamps. Behind it, capacity is up a great 5 cubic-ft. to 22.7; a tad less than before with seats folded at 46.9 cubic-ft.  Both same as all other NX’s, as Lexus was able to package the larger PHEV battery beneath the floor without robbing storage space. 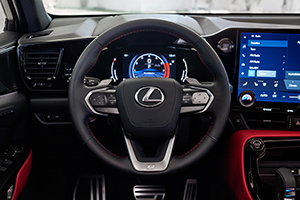 PHEV Government Fuel Economy Ratings are 36-Combined with the gas engine alone, and 84-Combined MPGe using electric alone.  Our mileage loop, with a minimum of plug-in time, was 36.1 miles-per-gallon on Premium. But, the PHEV does earn a well below average Energy Impact Score; consuming just 3.0-barrels of oil annually, with CO2 emissions of 1.4-tons. Ultra-efficiency doesn’t come cheap though, as the 450h+ starts at a lofty $56,725; while a base front-wheel-drive NX250 starts at $39,025.

When the Lexus NX finally arrived, there was little doubt it would be a roaring success. It was a no brainer move up for Toyota faithful. The only question was “what took you so long, Lexus?”  Well, the all-new 2022 Lexus NX, with its forward-looking powertrains, and calm yet even more capable driving experience, will only add to that success.