Laser-Focused Perfection on the Track

Porsche fans know that there are 2 distinct families of 911. The Carrera family, and the GT family. And while they both fly the Porsche flag and have many similarities; the GT family is packed full of a lot more racing technology from Porsche Motorsports. And, this 7th generation 2022 Porsche 911 GT3 without a doubt, sets a new level of performance for the 911.

Up front is a new fascia with larger air intakes that hide a wider track to add stability and sharpen turn-ins. A first for any 911 street car, the front suspension is a double wishbone design adapted from the 911 RSR, and all bushings have been dropped in favor of full ball joints, removing any hint of sloppiness from the equation. And allowing Porsche to fine tune for maximum responsiveness as well as transmit road feel directly to the driver’s hands. 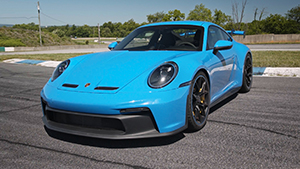 Curb weight is up only 11-lbs. over the previous GT3; 3,164-lbs, when PDK-equipped as our test car was. Drive mode settings are now accessed right on the GT3’s new 3-spoke steering wheel, and have Normal, Sport, and Track modes as expected; but are also tunable within’ each mode.

A full menu of choices, allows the driver to adjust suspension, traction control, and stability management settings on the fly.

And fly we did, reaching the blind crest of Summit Point Motorsports Park’s Shenandoah Circuit’s bridge straight at over 130 miles-per-hour; and feeling like we were launching into orbit. But the GT3 always returned to earth with a soft, controlled landing and set itself up perfectly for the abrupt drop into the Karussell turn that comes up ever so quickly.

Corner exit understeer is virtually eliminated here; the car goes exactly where you point it. So, if creating precise arcs around the corners of a race track is your thing, this is about the best tool we’ve found yet for that job.

You don’t necessarily need to upgrade to Porsche’s excellent Ceramic Composite Brakes, as the standard discs are larger than the last GT3 by more than an inch; but if you insist on the best of everything, you won’t mind spending the extra money to enjoy brakes that get better and better at dragging you down from insane speeds the more you use them, or should we say abuse them. And in straight-line testing, a mere 85 feet was needed to stop from 60. 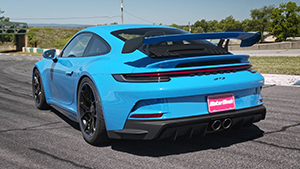 A surprisingly large percentage of buyers opted for a manual trans in the previous GT3, and a no-cost 6-speed manual remains available. But after spending a day with the standard 7-speed PDK’s mind-reading adaptability and lightning-fast gear changes, we’d be hard-pressed to trade away the obvious gains in performance it delivers just for the joys of stirring a shifter ourselves.

We were very happy to see that the GT3 is still sporting its naturally-aspirated 4.0-liter flat-6 engine. Coming over almost directly from the GT3 Cup race car, this latest version gets the revised intake first found on 2019’s Speedster, and shares its output of 502-horsepower and 346 lb-ft. of torque.

The GT3 is of course built for road course work first and foremost, but is more than tolerable on the street. Running ¼-miles is somewhere further down the list of priorities. Still, a trip to Mason Dixon Dragway was in order.

Many years of flawless, consistent launches with Porsche’s PDK Launch Control has made it the gold standard in our eyes. But this time we did battle some unexpected wheel spin. Still, our advice, stick with it; when all the stars align you will be rewarded with a lighting fast 2.8 seconds from 0-60. 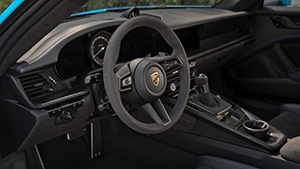 Once it laid down power in earnest, it was all rocket-like propulsion down the rest of the track, with blazing fast PDK shifts that make no attempt at being smooth, just deliberate. The ¼-mile ends in 10.9-seconds at 127 miles-per-hour.

Not surprisingly, the GT3’s interior is mostly all business and looks great. If track days are on your agenda, we recommend springing for the Full Bucket Seats. You’ll appreciate the rump-to-road connection, feeling locked in and ready for track work. Plus, they’re plenty tolerable on the street.

The 2022 Porsche 911 GT3 is arguably the most versatile 911 ever built; nimble and civilized on the street, while also being laser-focused perfection on the track. It’s a wonderfully best of both worlds scenario that doesn’t come along that often.