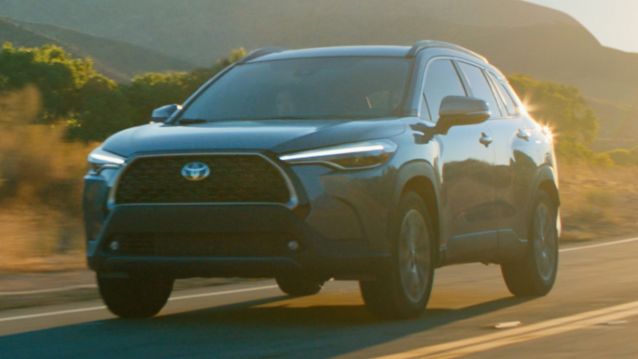 The Toyota Corolla is one of the best-selling cars of all time, and over the years, Toyota has tried to expand its reach by offering variations on that traditional 4-door sedan Corolla shape that we’ve all come to know. Their latest attempt to shake things up is this Corolla Cross utility. So, let’s see what this Corolla-flavored SUV can bring to a very crowded small utility segment.

If it were up to us, we probably would have named this latest Toyota crossover the “MiniRav,” but we understand why Toyota chose to call it the 2022 Corolla Cross. Not only does it give current Corolla compact owners a utility to seamlessly step up to, but it lays the groundwork to keep the nameplate alive if Toyota eventually follows others and stops selling sedans all together. 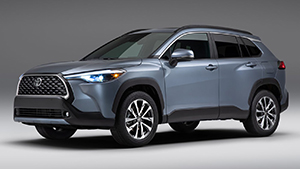 Assembled at a new Huntsville, Alabama, plant that Toyota shares with Mazda, the Corolla Cross gives the brand yet another entry into the insanely popular small crossover segment. A big reason for this popularity, of course, is crossovers have added space for everyday adventures, yet largely drive and feel exactly the same as the sedans they’re based on. There’s the benefit of all-wheel-drive in most cases, too, and Toyota has included that option here, unlike in their previous smallest offering, the CH-R.  And not only is AWD available, but the Corolla Cross gets more than 8-inches of ground clearance to be actually useful for more than just bad weather traction. Dynamic Torque Control can send as much as 50% of power to the rear wheels when called for. Otherwise it operates strictly in front-wheel-drive for best efficiency.

The Corolla Cross gets a naturally-aspirated 2.0-liter I4 rated at just 169-horsepower and 151 lb-ft. of torque; so, it’s not exactly a barn-burner when the light goes green. But, also attribute some of its sluggishness to the continuously variable transmission. It keeps engine revs hanging pretty high, and makes it sound like you’re really abusing the engine. It’s only a minor issue mostly experienced when you’re trying to get up to highway speeds as quickly as possible; much less noticeable in daily driving tasks scooting around the city.

And, a fix is already on the way as Toyota has just announced the 2023 Corolla Cross will debut the 5th generation of their Hybrid System; boasting all-wheel-drive, a 194-horsepower output, and 37-Combined miles-per-gallon. 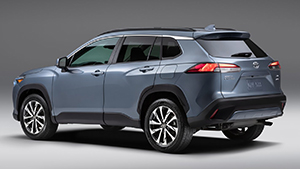 As for the current Corolla Cross, the trip to 60 was much more of a jog than a sprint, taking more than 10–second. Expect the Hybrid to be about 2-seconds quicker. Not much you can do from there, just keep the throttle pinned and try to ignore the buzzy engine as much as you can for the rest of the ¼-mile. That ended in 17.8–seconds at 81 miles-per-hour.

Things improved through the cones. Along with the added grip provided by the all-wheel-drive’s Dynamic Torque Control, AWD Corolla Cross’ also comes with a rear suspension upgrade; replacing the standard torsion beam with a fully independent setup. There is a minor disconnected feel through the steering wheel, and that tall ride height equated to some very noticeable body roll, but overall the Cross feels competent and safe, precisely what Toyota fans expect. Brakes were better still with panic stops averaging just 105 stable feet from 60 miles-per-hour.

The Corolla Cross’ cabin is refreshingly simple and many elements will be familiar to current Corolla sedan owners.  Cloth seats are standard in L and LE trim, while XLEs get SofTex coverings, along with a 10-way power seat for the driver.  We found them to be quite comfortable for entry-level. Plenty of space in the rear, too, with 60/40 split-folding seatbacks standard; XLE grade adds a center armrest. 25.2 cubic-ft. of cargo space is certainly good for the compact ute set. 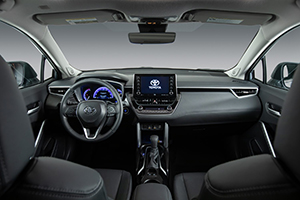 Toyota’s multimedia system has improved greatly over the last few years; base L gets a 7-inch screen, while all others feature an 8-inch touchscreen. Toyota didn’t go overboard with feature content, but all the expected amenities are here; along some great manual HVAC controls, and good outward visibility all around. Only slightly larger than the subcompact C-HR, the Corolla Cross has smoother styling, yet throws off a bit of a rugged vibe courtesy of the black lower body and tall, flat nose.

Government Fuel Economy Ratings with all-wheel-drive are 29-City, 32-Highway, and 30-Combined. We averaged a good 30.9 miles-per-gallon of Regular. That’s a slightly better than average Energy Impact Score of 9.9-barrels of yearly oil use, with CO2 emissions of 4.8-tons.

The word Corolla has always been synonymous with value, and that continues here with the Corolla Cross starting at $23,410; all-wheel-drive an additional $1,300.

Now it may surprise some of you that Corolla is an actual word that references the individual petals of a flower. Well, now that this 2022 Corolla Cross has blossomed into a practical and frugal little crossover SUV, there’s even more of a bountiful bouquet of utility vehicles to choose from at your local Toyota dealer.