Bigger isn’t Always Better, but it Sure Doesn’t Hurt

While SUVs are getting smaller and smaller, carmakers seem to be packing more and more into them. Case in point, the Volkswagen Taos, their smallest current SUV. So let’s find out how much it adds to the small crossover scene.

The 2022 Volkswagen Taos may be VW’s new entry into the small crossover segment, but truth is, it’s really not all that small.  With 175.8–inches of overall length, it’s actually an inch and a half longer than the original compact Tiguan, which has grown in recent years to make room for the Taos. So VW calls Taos a compact too.

Like most current VW’s, it’s based on their MQB platform, and with its sculpted hood, tall face with wide 3-bar grille, and strong character lines; it fits in nicely with the rest of the growing Volkswagen utility family. 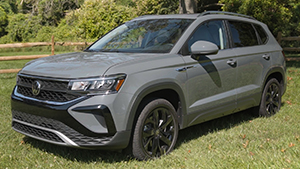 And it really does feel roomy inside; one of our testers even describing rear set leg room as enormous.

That rear seat is not only split/folding but has a pass thru as well, so you can haul longer items like skis and still have seating for 2 adults.  And there’s a great 27.9 cubic-ft. of cargo space in back; expanding to 65.9 with the seatbacks folded.

VW continues to ratchet up the amount of standard features in their vehicles, even including their digital cockpit here in the Taos, something most carmakers only make available in their highest trims. Though top SEL does get a larger 10-inch version of it.

There are some hints that it’s built to an entry-level price, but most things you interact have a high quality feel.  All models get MIB touchscreen infotainment; a 6.5-inch screen in base S trim, all others step up to an 8.0-inch screen. The Taos uses an updated version of the Jetta’s 1.4-liter turbo-4; punched out to 1.5-liters.

Internal friction has also been reduced, cooling improved, fuel injection system upgraded, and turbo cranked up a bit to produce 158-horsepower 184 lb-ft. of torque. All of this, and fine fuel economy too.

At 28-City, 36-Highway, and 31-Combined for front-wheel-drive; Government Fuel Economy Ratings are better than many compact sedans. We averaged a fine 30.6 miles-per-gallon of Regular.

For a way better than average Energy Impact Score of 10.6-barrels of yearly oil use with 4.7-tons of CO2 emissions.

Standard front-wheel-drive versions come with an 8-speed automatic transmission, while all-wheel-drives get a 7-speed DSG. 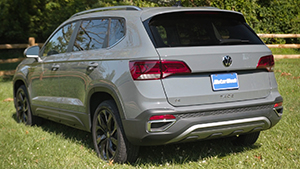 There are more differences as well; as 4Motion equipped Taos’ have a slightly shorter wheelbase, Driving Mode Selection, and even a more trick multi-link rear suspension. This results in a slightly reconfigured cargo area which does mean a loss of some space.

So when it comes to driving, they each have their own unique feel too. Our front-wheel-driver has a more basic torsion beam rear setup; but both versions have the same strut-type front suspension.

So, off to Mason Dixon Dragway; but before we started running ¼-miles, we hit our handling course.

Without a back-to-back comparison it’s hard to say how much better the 4Motion version would be, but there’s nothing fundamentally wrong with this front-wheel-drive setup.

Only minor body roll to deal with, and it was quite fun to whip in and out of the cones, provided we kept the speeds just shy of the point at which the stability system wants to take over.

The Taos could use a little more grunt off the line, as it takes a while for power to get flowing. 60 miles-per-hour took a leisurely 8.8-seconds to achieve; with the ¼-mile coming in at 16.7 at 83 miles-per-hour. 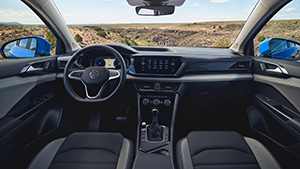 So, power may not be overwhelming, but it felt plenty adequate in every day driving situations. The torque gets things up to speed quickly enough to find gaps in traffic; and while it may not be as quiet inside as some rivals; ride quality is quite comfy.

A fairly high seat height and great visibility all around really do make you feel like you’re in something much bigger. Even the side mirrors are better than most; very substantial, delivering great rearward visibility. Only basic safety systems are standard; as Automatic Emergency Braking requires adding VW’s IQ.DRIVE driver assistance package.

So, pricing starts at a relatively low $24,190; available all-wheel-drive pricing varies with trim level.  With more options to choose from than just about any other vehicle category, we certainly didn’t need another small crossover.

So, if you’re going to do it; you’d better bring something new to the party. The 2022 Volkswagen Taos has a mix of spaciousness, standard features, and functionality that is more than enough to shake up the segment.  When it comes to small SUVs, bigger isn’t always better, but it sure doesn’t hurt.