The Volvo brand has very ambitious plans of selling only purely electric vehicles by 2030. That’s only 8 years away! So, in order for that to happen, they need to expand their EV offerings and quickly. So, now joining the XC40 Recharge is this all-new C40 Recharge. Let’s see how much it adds to Volvo’s charge to go all-electric.

There’s only one letter separating the 2022 Volvo C40 Recharge from the XC40 Recharge, and fittingly, these 40s are a lot more alike than they are different. Nowadays, coupe-like is the new active lifestyle buzzword, and this athletic-looking hatchback appears like a mashup of the XC40 utility and a Polestar 2 hatchback; and that’s essentially what it is. 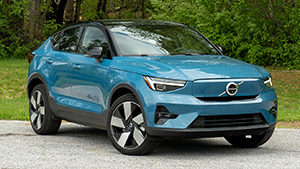 Similarities with the XC40 Recharge include both its standard all-wheel-drive powertrain, with twin 150kW motors, outputting a total of 402-horsepower and 486 lb-ft. of torque, and the 78-kWh battery pack; though there’s a bit less cargo space, as well as tighter rear seat headroom. It’s much more aerodynamic, of course, and just looks cool, with one sloping roofline from windshield header to tail.

But unlike the XC40, the C40 is fully electric and will remain so, with no plans for a hybrid version; and its 226-miles of range comes in 3-more than the XC40, with a good efficiency rating of 39kWh/100 miles. In our testing, we found that range estimate to be quiet conservative and were on pace to get closer to 250-miles out of a full charge.

Rear visibility is hindered somewhat by the tall tail, but the side mirrors are great, and there are plenty of warning systems in place; better living through technology, right? The interior is Volvo’s latest reminder that even when you forgo leather, you can still create a very luxurious feel.  Nice touches include backlit trim panels, unique topographical dash motif, and color combos that are a departure from bland beige or black. Just 17.3 cubic-ft. of cargo room behind the rear seats, still expanding nicely with them folded, plus a small storage nook under the hood adds almost another cubic-ft. 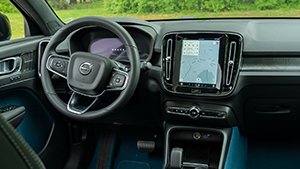 For as high tech and forward thinking as it is, Volvo has gone to great lengths to simplify your actual interactions with that tech. Plus, you can then dial things back even more in the interest of increasing efficiency should you so choose. It does take a while to get used to not having a start button to start things up; but the C40 knows why you’re here, so it’s ready to roll as soon as you sit down; just select a gear and go. And, there are just 2 levels of adjustment for the regen braking, basically 1-pedal driving on or off. The 1-pedal setup works quite well, but for some, it’s still a very unnatural feel for so much braking force as soon as you lift off the accelerator.

The C40 feels nimble enough to keep your driving entertaining, but it’s clearly not as capable as the Ohlins-equipped Polestar 2; it also felt a little harsh over bumps and perhaps a little less refined than a typical Volvo. The accelerator pedal is very responsive at speed, and also was the catalyst to instantaneous power delivery at Mason Dixon Dragway. 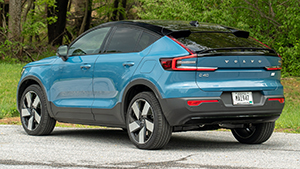 Launching off the line was as simple as it can be, with the rear of the car squatting down before pouncing to 60 in just 4.4-seconds. From there, power stops building as fast, and sort of levels off as you work your way down the rest of the track; finishing out the ¼-mile in 13.1-seconds at 105 miles-per-hour. The C40’s suspension was very tight and stiff during handling runs, with very little body roll.  At its limits, some minor understeer showed up, but it wasn’t a hindrance at all to maintaining a good pace.  Steering is rather vague, like many electric cars, but point it where you want to go and the C40 charges or Recharges with immediacy.

There are 3 C40s to choose from, starting with a well-equipped Core model for $56,395, just $1,550 more for the mid-level Plus, and for the ultimate, there’s Ultimate, starting at $61,195. That’s priced competitively, for sure, but they do seem to be competing with themselves a bit, offering the more utility-like XC40 Recharge for about 2-grand cheaper, and sister brand’s Polestar 2 is available for even less.

But just like every other modern Volvo, the 2022 Volvo C40 Recharge is stylish, functional, and forward-looking.  It’s hard not to be impressed and even excited about the all-electric future from Volvo.