Much More Than Just A Placeholder

Everyone’s doing the electric dance these days, even spin-off brands like Hyundai’s Genesis, with this Electrified G80 sedan.  And just so we’re all on the same page, they’ve actually named it the Electrified G80. So, let’s unplug and go for a spin, and see where Genesis luxury is headed as they charge towards an EV future.

As an electrified version of a model already in their lineup, you could look at the 2023 Genesis Electrified G80 as a compromise, or even a stop-gap measure on the way to bigger and better things. But that would be selling it far short, as it’s a gleaming example of seamlessly and beautifully integrating new powertrains and technologies into an existing platform with little to no compromise. 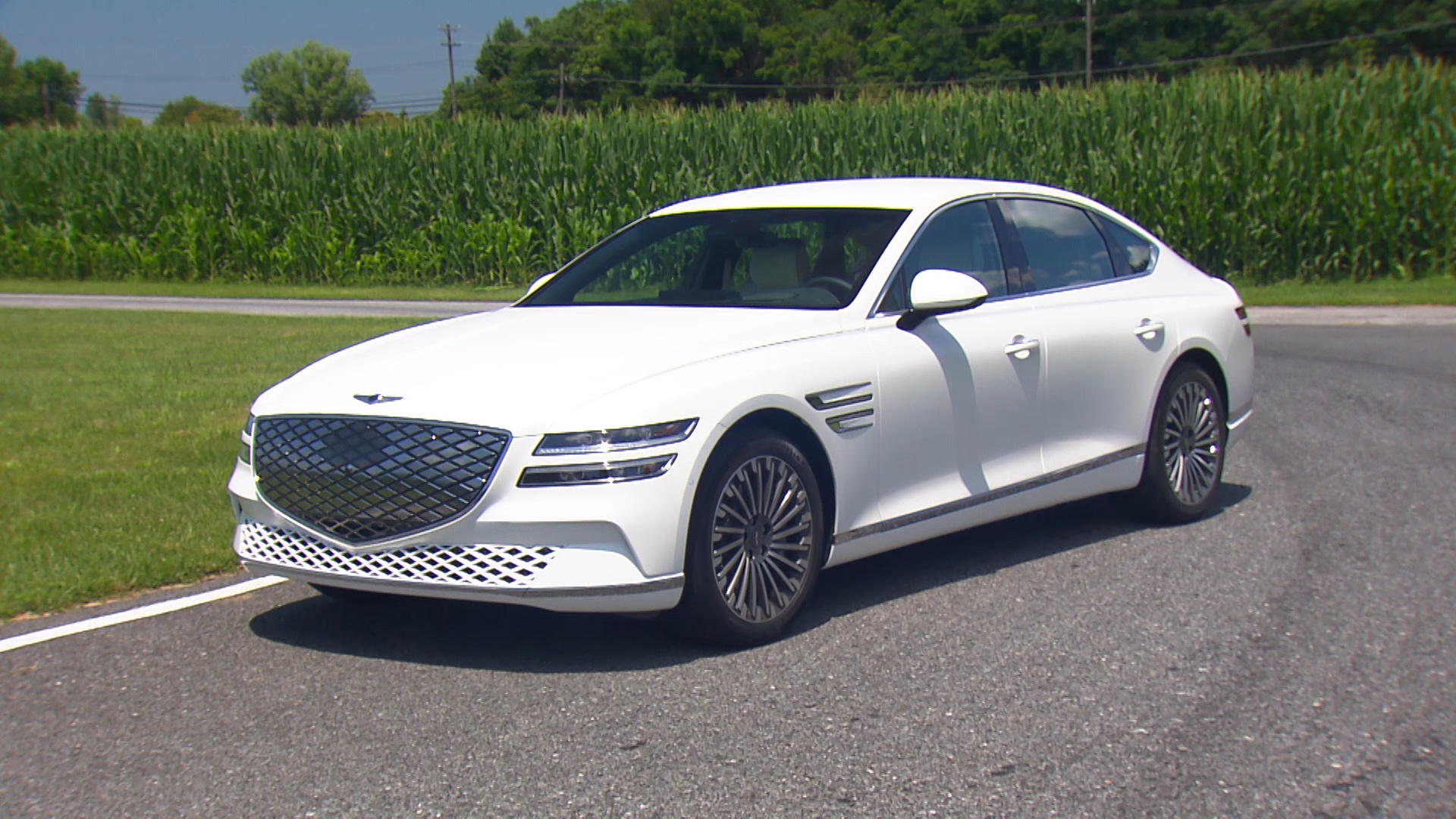 It truly looks elegant both up close and from afar. One of the biggest dilemmas with the shift to electric has been what to do with the face of the vehicle; either to keep a grille even though it’s not needed or do away with it entirely. We love Genesis’ take; keeping a traditional-looking front end, and even using their signature Crest Grille to impeccably integrate a door for the charge port.

Inside, it’s every bit as elegant; plush seats covered in Nappa leather, fine stitch-work on the dash, and large crystal-clear LED displays. There’s also some unique looking veneers on the console and doors; a departure from the usual wood grain. A 21-speaker Lexicon sound system is on hand to provide a soothing soundtrack to whatever escapes you have planned. The experience is quite special for rear seat passengers too, with their own set of controls and materials that are every bit as nice as what’s up front. But, this is also where we do begin to see a little compromise, as leg room is not as plentiful as you’d find in most dedicated EV platforms. And, in the trunk, the battery eats up some cargo space, reducing it to 10.8 cubic-ft., down from the standard G80’s 13.1.

That 87.2-kWh battery powers twin 136-kW electric motors; one up front, and one in back for standard all-wheel drive. Combined output is 365-horsepower and a whopping 516 lb-ft. of torque. Plus, there is plenty of hardware on display under the hood, looking almost like a traditional engine. 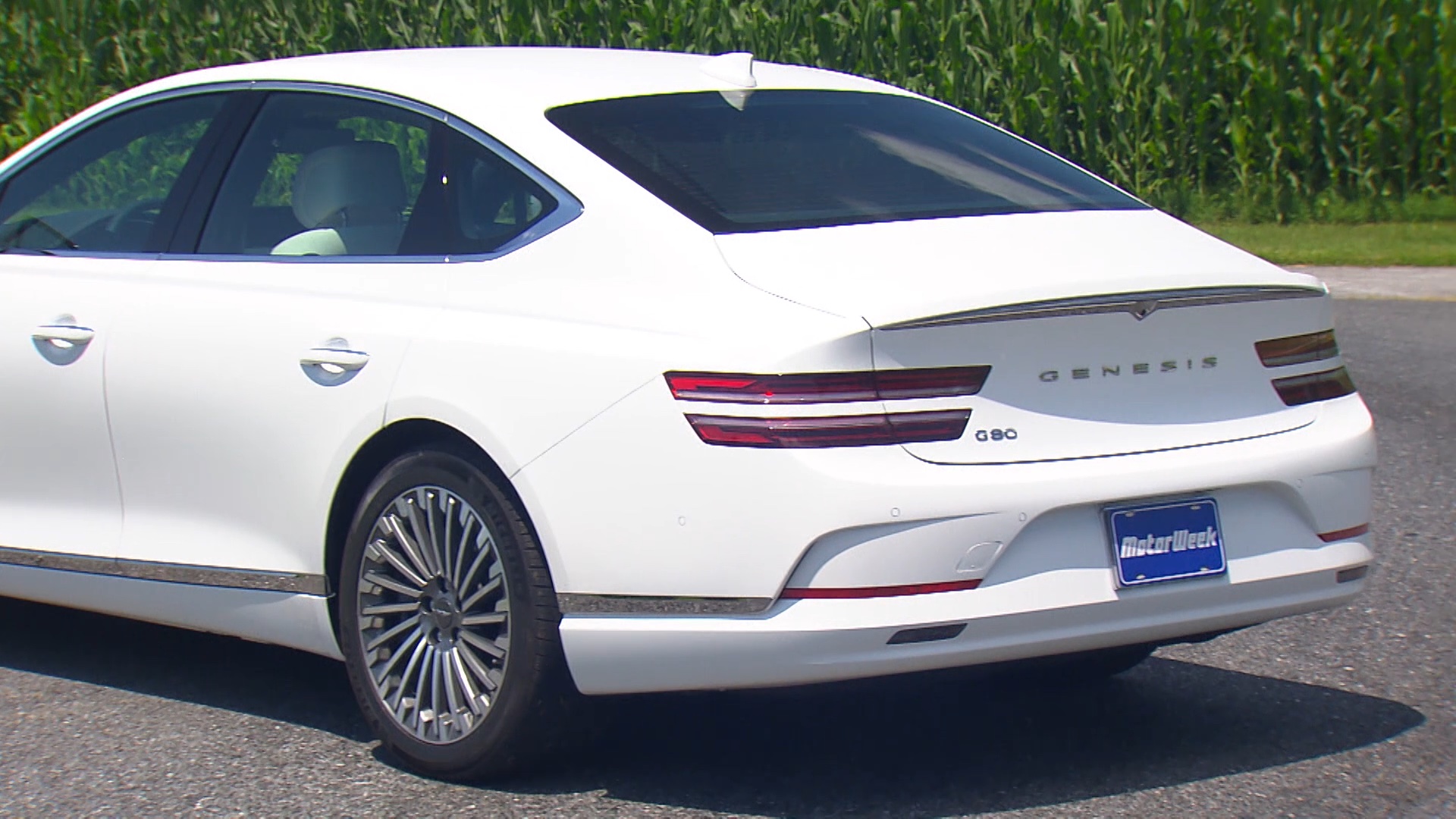 Oddly, Genesis claims a range of only 282-miles, but we saw as many as 342 available in the gauge display. And, we returned from a 277-mile road trip with an indicated 16% of battery life remaining, which put us on pace for about 330-miles. Of course, that didn’t include wide-open ¼-mile runs at Mason Dixon Dragway, which were actually quite a thrill ride.

This big beast jumped off the line like it weighs half of its actual 5,000–lbs. demolishing the 0-60 in just 4.2-seconds. But, like many EVs, from there, it seemed to dial the power back a bit as we worked our way down the track; ultimately finishing the ¼-mile in 12.8-seconds at 107 miles-per-hour.

You can tell they are clearly restricting what it’s capable of, as power delivery seems to pulse on and off like a pony rider constantly pulling back on the reins. It’s the only thing that distracts from a very serenely fast experience. 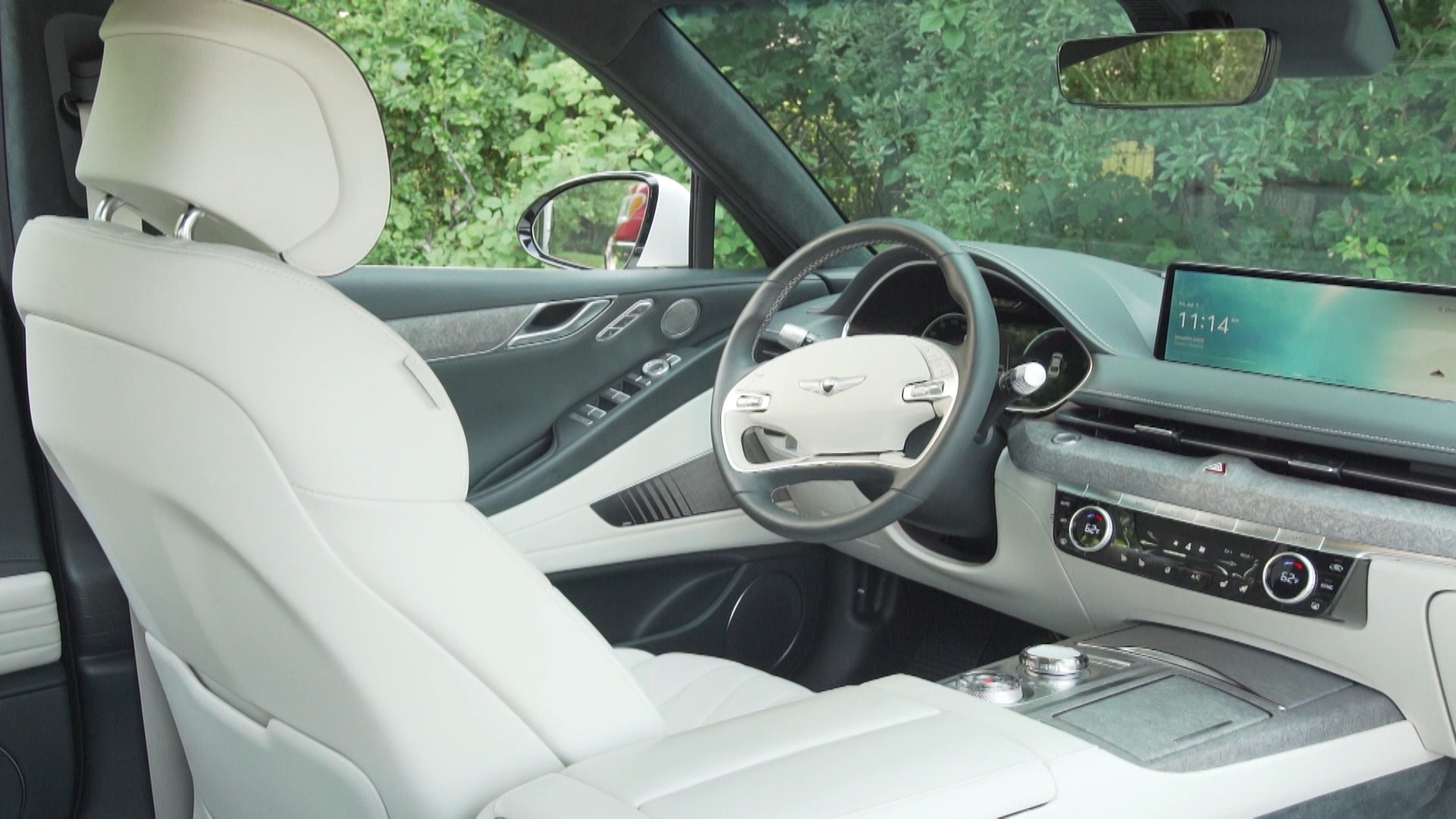 Now, when it came to the slalom course… nimble, it’s not. But, for a big luxury car that makes absolutely no performance claims, it got through the cones really well at a fairly high rate of speed. Only mild understeer, as you can feel some torque-vectoring of power happening to negate it.  Overall, it was very smooth and quite easy to maintain momentum. In braking runs, we averaged a fine 117-feet from 60, with a good natural feel through the pedal, but they did begin to fade after 4 hard stops.

Available in one fully-loaded model, the Electrified G80 is on sale now for $80,920; but only in the usual East and West Coast limited markets.  Availability will begin expanding before years end.

The 2023 Genesis Electrified G80 makes no secret of what it’s all about; it’s right there in the name.  Genesis has taken one of their best ever efforts and given it a whole new drivetrain to power them into the future. We already know they have many dedicated EVs in the works; but the Electrified G80 is much more than just a placeholder.