The Genesis G90 sedan has not been around for all that long, just 5 years in fact. Though it actually did exist well before that as the Hyundai Equus well before that. But no matter which nameplate it carries, the result aims for flagship status, so a new generation G90 is a very big deal. Let’s give it the attention it deserves!

If it’s attention you seek, just try rolling up just about anywhere in this 2023 Genesis G90 sedan. Heads will turn, people will point, and hushed whispers of “what is that?” could possibly be heard; as while seeing a Genesis is not exactly a rare occurrence these days, laying eyes on this G90 flagship is still an event. 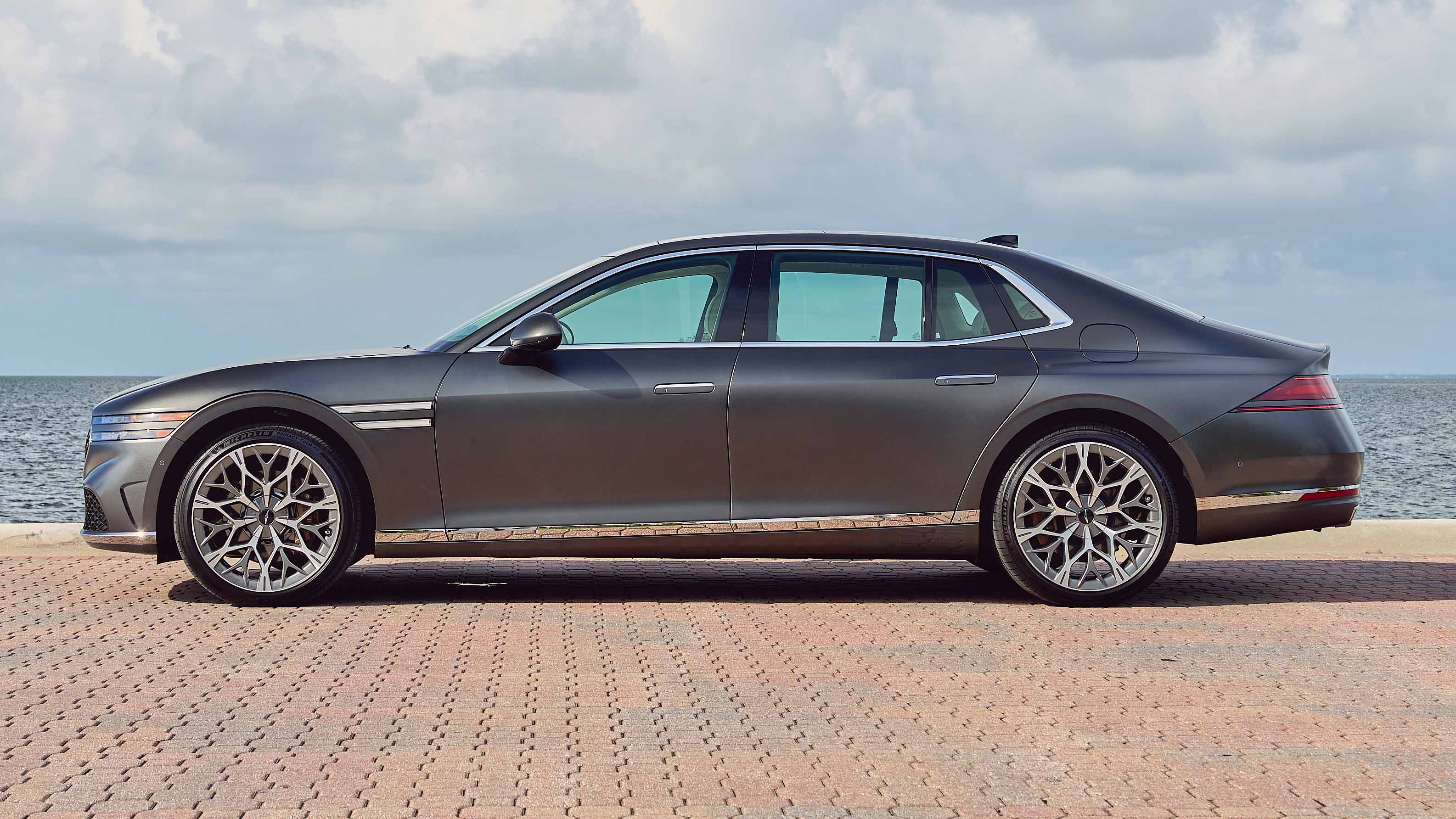 It’s not a secret that Genesis has been building some beautiful vehicles lately, but this G90 clearly takes it to a new level of elegance and sophistication. Genesis’ signature Crest grille sets the tone of course, and their Two-Line headlamps still seem new; but overall the graceful lines, attention to detail, and exquisite proportions speak more Rolls-Royce than Mercedes-Benz.

Naturally, it’ll park itself for you, but even a Hyundai Elantra will do that these days. But it can’t do this trick; the G90 comes with hefty, power operated doors that fully close as well as partially open with just a touch of a button.

Inside, the leather, metal accents and switchgear all look and feel fantastic to the touch; though we were less enamored by the wood trim made with recycled newspapers but can appreciate its uniqueness. There are fragrance diffusers and massaging seats; not to mention a 23-speaker B&O 3D Premium audio and Mood Curator; all in place to not only shelter you from the outside world, but straight up pamper you in a way we’re not really accustomed to here in the real world.

Both the gauge cluster and the high-mounted central infotainment screen are 12-inch widescreens; and the console features a rotary shifter and central controller made of glass and aluminum. Dual sunroofs allow in plenty of natural light, while comprehensive ambient lighting sets the mood at night. The back seat is its own special kind of experience with First Class accommodations, room to spread out, and individually adjustable seats; along with plenty of controls and storage options. Good amount of storage nooks up front too, and room for 12.0 cubic-ft. of luggage in the trunk. 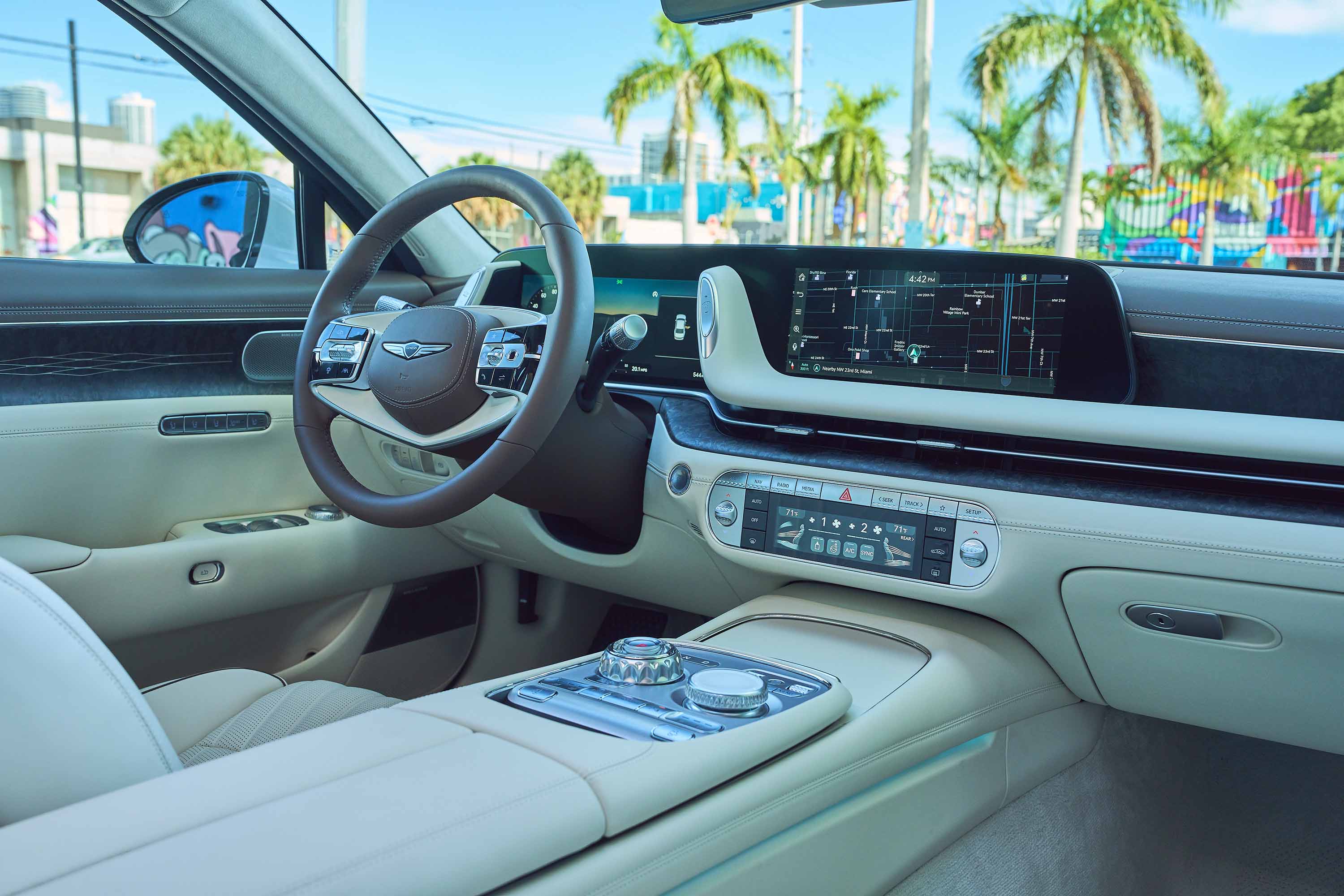 All G90s feature a 3.5-liter twin-turbo V6 engine, but there are 2 levels of performance; the standard version makes 375-horsepower, while an optional 48-volt e-Supercharger boosts power to 409-hp and 405 lb-ft. of torque.  All-wheel drive is standard, as is an 8-speed automatic transmission with steering wheel-mounted paddle shifters. Just as important as power numbers in this segment is power delivery; and not only does this enhanced twin-turbo 6 deliver torque like a V8, it does so in the ultra-silky way buyers of 6-figure luxury cars expect.

In fact, at our Mason Dixon test track, it was so smooth and effortless off the line, it took us quite a few runs before we actually believed we were getting to 60 in only 4.9-seconds. This is 5,000-lbs. of opulence that gets up to speed without even feeling like you’re moving.

There’s virtually no engine noise seeping into the cabin, but when shifts occur in the 8-speed automatic transmission, they punch surprisingly hard. It’s really the only piece of evidence to glean that there is some serious performance taking place here. We completed the ¼-mile in 13.5-seconds at 106 miles-per-hour. 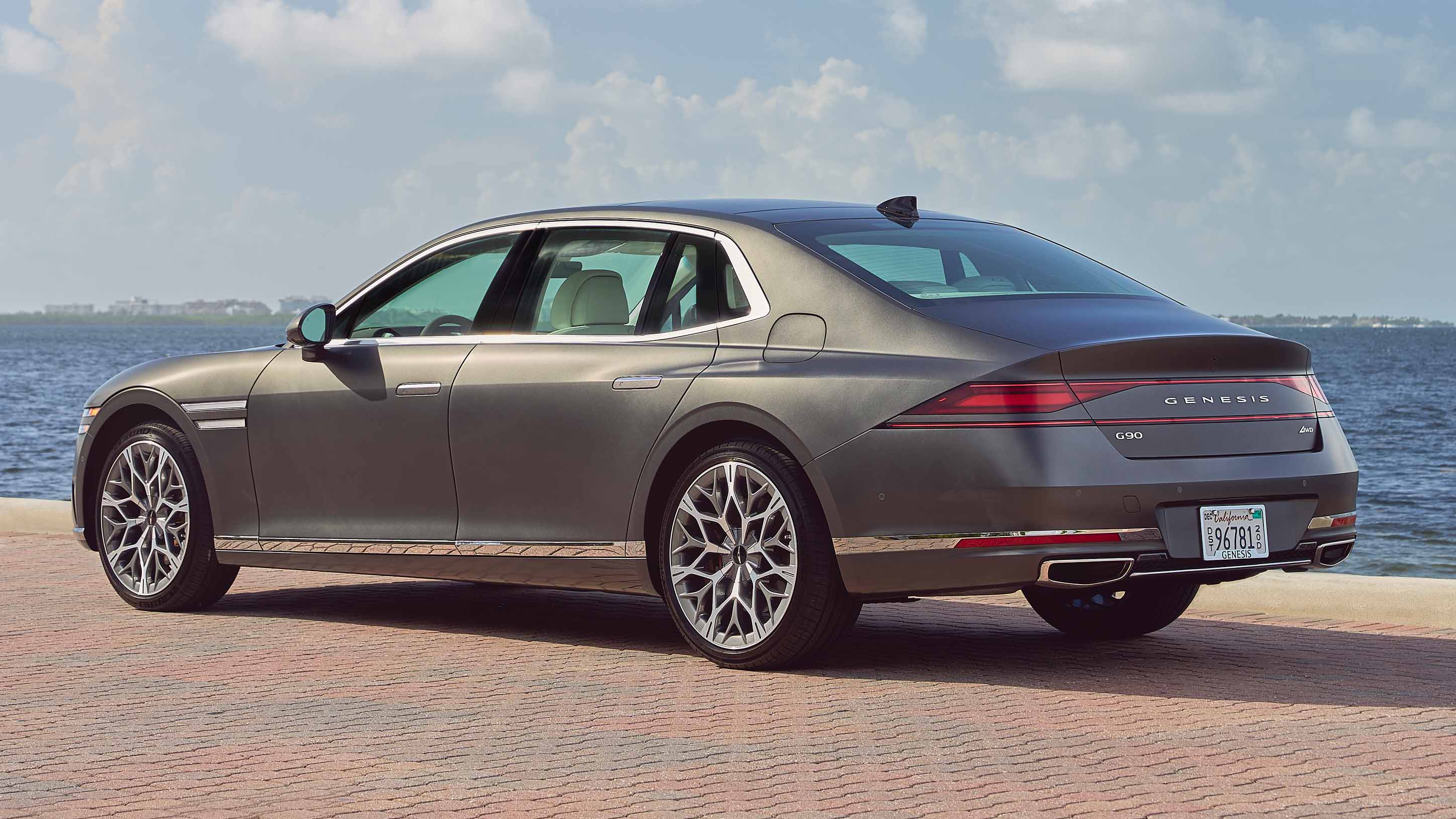 You would think all that excitement would come to an end once we tackled our handling course, and you’d be wrong. With Sport mode engaged, this big behemoth cut through our cone course with the agility of a sport sedan half its size. Aided by the rear-wheel-steering and multi-chamber air suspension of this e-supercharged G90, we could carry quite a bit of speed through here always feeling firmly planted in the pavement. Brakes hold up their end of the bargain too, bringing us to a halt from 60 in just 105-feet. It does get a little light in the rear with all of the nosedive, but stops were consistently straight and true.

Government Fuel Economy Ratings for the e-boosted V6 turbo are 17-City, 24-Highway, and 20-Combined; our average, an exceptional 24.2 miles-per-gallon of Premium. That makes a slightly below average Energy Impact Score of 14.9-barrels of yearly oil use, with 7.3-tons of CO2 emissions.

While not inexpensive, we’d still say getting the G90’s extravagance for $89,495 is a screaming bargain; $99,795 with the upgraded powertrain.

So not only does this 2023 Genesis G90 deliver an amazing amount of luxury for the price, but an incredible amount of performance too.  It’s the kind of high-speed magic carpet ride that very few vehicles can deliver.  Buyers looking out for the finer of mechanical things should get on board now.