Hello and welcome again to MotorWeek. We’re glad to have you with us for this special edition celebrating our 35 years on the television. You know, this original set exists only in virtual reality now, but it was MotorWeek’s home in studio “A” at Maryland Public Television for our first 6 seasons.

The set design was somewhere in-between an automotive design studio, a place few outsiders had ever seen, and a new car showroom. We wanted to create a space where our viewers could experience the newest cars and trucks from an insider’s view, before they went on sale.

While not all of our early test cars have survived the test of time, a few stand out as important milestones on the automotive timeline. So let’s start things off with a look in the rearview mirror at a few of our MotorWeek automotive all-stars.

JOHN DAVIS: We’re proud to have witnessed several automotive milestones over the course of our history. 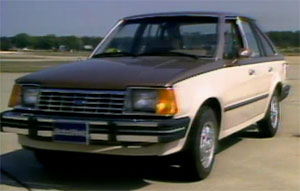 For MotorWeek’s first broadcast, our studio cameras focused on the trendsetting new “world car” from Ford, the Escort, along with a fun and quirky Italian import, the Fiat Strada. Both were front-runners in the front-wheel-drive revolution, as mainstream cars went from pushers to pullers seemingly overnight.

In 1981, The K-Car was already taking badge-engineering to the extreme. And over the next 8 years, spawned countless spin-offs from the same basic chassis, including the ubiquitous minivan, arguably the most significant vehicle of the last 35 years, and one that changed the face of family transportation forever.

We saw the end of an era in the mid ‘80s when virtually all of the cool European sports cars packed up their side curtains and headed back across the pond… only to be reincarnated, in spirit at least, by the 1990 Mazda Miata -- which led a roadster revival that is still luring sunseekers today. 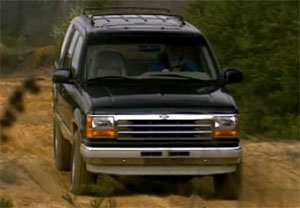 AMC/Jeep’s 1984 4-door Cherokee and woody Wagoneer were the first midsize vehicles to blur the line between cars and trucks, but it was the huge popularity of Ford’s Explorer in the early ‘90s that fueled the SUV phenomenon.

The 1982 Honda Accord hit the streets just a month before our premier broadcast. The first Japanese-brand car built in America, that Accord was everywhere in the eighties, and with good reason:  “…as a total package, this Honda tended to be much more than the sum of its parts. In short, the Honda Accord is a very competent family car.”

We were bullish on the Ford Taurus in 1986, as it ushered in the aerodynamic oval era of automotive styling and remained a big seller for nearly two decades.

Our early exotic car adventures, in cars like the Bitter, DeLorean and Lancia Zagato whet our appetites for world-class performance, while the debut of a new Chevy Corvette for 1984 signaled at long last America’s arrival in the modern sports car corral. 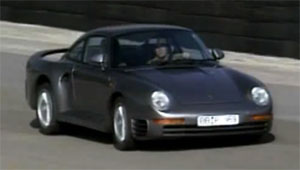 Our first drives in the Porsche 911 and BMW M3 became our performance benchmarks for years to come, and set a high bar for other sports cars to reach for.

The Corvette ZR1 fulfilled our desire for a uniquely American high performance icon in 1990. Dodge followed suit with the Viper a year later, and the modern horsepower wars were born.  But amazingly, all of them are yawners compared to today’s crop of muscle cars.

In fact, we remember when the baddest car in the land was a slab-sided sedan. Come to think of it, that’s still true!

Subaru may have laid claim to the first Sport Utility Wagon in the ‘90s with the Outback, but if you ask us, that segment-buster status was won by the AMC Eagle more than a decade earlier… 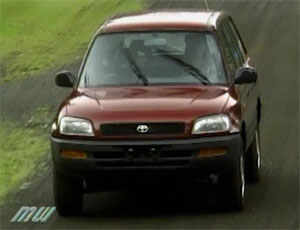 By our reckoning, Toyota’s RAV4 was the first true crossover utility, blending a car-like unibody chassis with an SUV-like stance and versatility in a compact garage-friendly package.

GM’s EV1 showed the promise of clean, efficient electric power, but its original heavy lead-acid batteries were anything but. It wasn’t until 1997 that the Toyota Prius gas-electric hybrid realized that potential in an affordable, family-friendly mass-market car.

Perfect packaging and bling for the buck was the calling card of Lexus LS400, Infiniti Q45 and Acura Legend when they tilted the luxury car globe off of its European axis in the late ‘80s, and opened the upscale car market to the middle class.

And we’d be remiss to not mention the Ford F-150. It was already the top-selling vehicle in America when we debuted in 1981, and has remained so throughout our entire 35-year run. Simply amazing!

With the once science-fiction autonomous car of the future nearly upon us, we continue to be astounded by the level of technology, efficiency and performance that is being packed into our cars.

As the cars have become more sophisticated, so MotorWeek has evolved to keep pace. And the same concept from 35 years ago still goes today...for us the cars are still the stars!