If you still think that your EV choices are limited to just the affordable Nissan leaf, or a high-end Tesla, you’ve obviously haven’t been paying attention. These last few years have seen EVs arrive from just about every carmaker, and there are plenty more just around the corner. So let’s get our electric drive unit’s runnin’ and head out on the highway!

We’re not really looking for much adventure here, but we are clearly at the turning point in automotive history. EVs are becoming mainstream. So, here’s a look at five EVs that are making that happen in 2019. 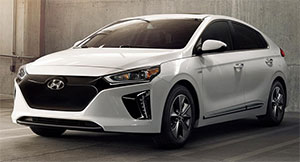 One of the most recent entries into the market, the Hyundai Ioniq Electric has been around since 20-17 as the full-EV version of Hyundai’s global midsize hatchback, which is also available in Hybrid and PHEV versions. This EV has an 88-kW motor, which equates to 118-horsepower and 218 lb-ft. of torque, and stores energy in a 28-kWh battery pack. Range on a full charge is 124-miles, and its $31,235 base price before incentives, makes it one of the least expensive EVs out there.

BEN DAVIS: “I like the Ioniq’s paddle activated regenerative braking controls. They make it quick and easy to shuffle through the different levels of aggression. I prefer the most aggressive mode, because I like to reclaim as much energy as possible.”

Believe it or not, some versions of this Volkswagen e-Golf has been available in the U.S. since 2012. With almost constant refinement since, the current version has a 100-kW motor for 134-horsepower and 214 lb-ft. of torque. 35.8-kWh of battery capacity yields a range of 125-miles. And pricing starts not much higher than the Ioniq, at $32,790. 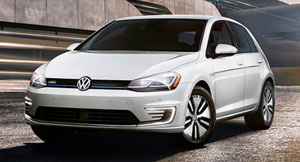 “The Volkswagen eGolf has much in common with others in the current crop of electric cars. It’s smooth, its powerful, and it’s fast. But, it is still first and foremost a Volkswagen. So, it drives like all other Golfs. Solid, Surefooted, and Safe. This car really feels like it’s one with the road. So the eGolf is my pick as the driver’s car of current electric cars.”

And while 120-something miles of range will work for some; most people would feel a lot more comfortable if that number was north of 200, which is where all of our next three EVs live. 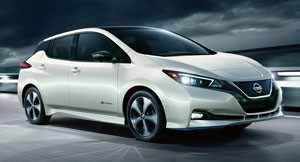 The Nissan Leaf is the best-selling EV in the world, and created the basic template that most EVs follow today. And while the original could barely eke out 100-miles of range, the latest Leaf Plus is rated for 226-miles. It stores energy in a 62-kWh battery pack, and unleashes it through a 160-kW motor with 214-horsepower and 250 lb-ft. of torque. Plus pricing starts at $37,445.

The Chevrolet Bolt EV was a true game changer when it arrived for 2017. Not only was it the first non-Tesla EV to offer more than 200-miles of range; but with tax incentives, it was available for under $30,000. No major changes since, it still offers 238-miles of range from its 60-kWh battery, has a 150–Kw motor that puts out 200-horspower and 266 lb-ft. of torque, with a base sticker of $37,495. Plus, it approaches the eGolf at being fun to drive. 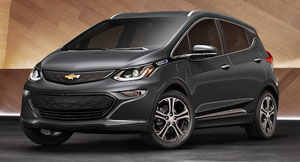 GARICK ZIKAN: “The Bolt gives you a lot of really good information right in front of you on the digital gauge cluster. On the right, you can see the kilowatts you’re using. It fluctuates based on how aggressively you’re accelerating. Right below that you can see when the regenerative braking kicks in. I pay more attention to the left side… that’s where you see the range. The Bolt tells you the minimum… maximum… and average range you have at any given point. If you like that instant torque you get from EV’s as much as I do… you’ll get less range. A lighter right foot… you’ll get more range. A light right foot plus regenerative braking… and you can actually add miles to your range. All this information is updated in real time, so you can adjust your driving habits to get the most miles out of every charge.” 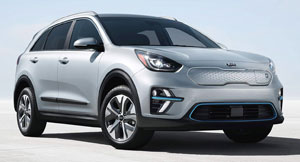 That brings us to one of the newest EVs on the market, and also our mileage champ here. It’s the Kia Niro EV. Granted, its government-rated 239-miles is only one more than the Bolt EV, but it also does the Bolt EV one more, by taking its crossover appearance and actually delivering real crossover utility to go with it. Much like the Ioniq, the Niro is also available in Hybrid and PHEV forms, and the full-EV is barely different in its execution. 201-horsepower and 291 lb-ft. of torque are produced by a 150-kW motor that draws power from a 64-kWh battery pack. Base pricing is $39,495, and this Niro is perhaps the best example yet of where we’re headed.

DENNIS SMITH: “So, the technology is better than it’s ever been before on the electric vehicles. Not only is the range longer but they give you more information as far as how much juice you’ve got left and how much regen you’re putting back into the battery every time you start and stop it. So you can really stretch your range longer than you’ve ever really thought before.”

So, while this was not an exhaustive list of all available EVs by any means, these five fully-electric cars, not only prove that your highly affordable plug-in choices are greater than ever, but that EVs are no longer the future, they are the “here and now.”