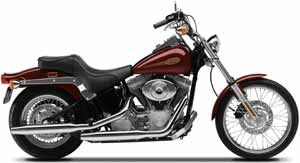 Tradition is a wonderful thing, and no one knows motoring traditions like Harley Davidson. But that doesn’t mean that they resist change, when that change is for the better. Take their latest twin cam engine, for example. In the two years since its introduction, it has spread throughout the Harley line, replacing the venerable evolution-series motor in almost every model. So we just had to sample it to see how well Harley balances tradition and technology in the 21st century. To the uninitiated, the Harley Davidson Twin Cam engine doesn’t appear to offer anything new. It’s still an air-cooled, 45-degree V-twin, with pushrod valve actuation. The same type of engine that’s been propelling Harley Davidson motorcycles for decades. But inside that familiar-looking powerplant, there are big differences. Where once a single camshaft operated all four pushrods, there are now two cams, hence the Twin Cam name.

But the differences don’t stop there. Those who ride Harley’s most popular Softail line, also benefit from the addition of twin, chain-driven counterbalancers. And while the Harley engineers were at it, they also bumped the Big Twin’s displacement up to an even bigger 1,450 cc’s, or 88 cubic-inches to you old-timers. All that, plus reshaped combustion chambers, larger intake ports, a new internal oil pump, and a host of other changes, that make the Twin Cam pretty much an all-new engine. One which, on our Softail Standard test bike, is fed by either a standard 40mm carburetor, or for 2001, optional electronic fuel injection.

And the results of all these changes are very impressive. The Twin Cam is not just the smoothest Harley ever, but in fact feels as refined as many foreign-badged V-twins. Gone is the teeth-chattering vibration of the Evolution era, replaced by a gentle-loping feel at both idle and speed.

Throttle response is also improved, but still exhibits that annoying off-idle stumble that plagued earlier Harley engines. But it’s definitely stronger. In fact, Harley claims double-digit improvements in both horsepower and torque. But all without ruining that famous Harley exhaust note. 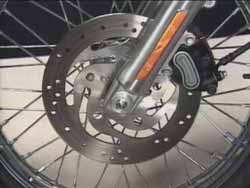 But there’s more to the Softail Standard than a great new engine. All Softail models also get a new, stiffer frame. As well as a new brake system with a 4-piston front caliper that, while still requiring a healthy squeeze of the lever, quickly brought our Softail down from speed with a safe, solid feel. The stiffer chassis also means better handling. Though with a long 66.9-inch wheelbase, and soft suspension, slow-and-easy is still the order of the day.

We must admit, however, to being quite disappointed with the seat, which lacks the support needed for all-day rides. And passengers get even less, thanks to the rear seat’s narrow pad and soft foam. Our test riders were divided about the spread-out riding position. Some liked it, while others preferred the more upright feel of Softail siblings like the Fat Boy.

But all agreed that the Twin Cam engine that powers the Softail Standard is a huge leap forward. One that will cost you $12,535, before dealer markup. Add the fuel injection option, and pay an additional $800. While a factory security system is $250 more.

With the advent of the Twin Cam engine, America’s most successful motorcycle manufacturer brings its most popular machines into the new millennium with the refinement and power to beat any competitor in the big twin segment. And proves once again, that few vehicle manufacturers, car or bike, can mix tradition and technology quite like Harley Davidson.