In the world of high performance cars, names like Mustang, Corvette, and Viper are true legends. Timeless legends that continue to evolve, increasing their performance capabilities as buyers demand more and more power and grip. Well, the latest and most potent versions of these icons are all right here: the Ford Mustang Cobra R, the Chevrolet Corvette Z06, and the Dodge Viper ACR. Each easily does justice to its famous name. But when they go head to head on the race track, which legend will cross the finish line first? To answer that question, we subjected this trio to three days of high speed torture testing at Savannah, Georgia’s flat and fast Roebling Road Raceway. And despite our best efforts at making the tires squeal, engines scream, and brakes fry, not one of these proud warriors was willing to admit defeat.

Of the three, the Ford SVT Mustang Cobra R is the most purpose-built for serious track work, and it certainly looks the part. The deep front fascia and power dome hood, side exhaust, and airplane-sized rear wing are not-so-subtle reminders of this Cobra’s bite. Inside, Ford’s Special Vehicle Team has installed form-hugging Recaro sport buckets, and not much else: No radio, no rear seat, no air conditioning, no sissy stuff here! What lies under the hood is not for softies, either. SVT heavily modified Ford’s all- aluminum, modular 5.4-liter V8. Tweaking it up in volume to the tune of 385 horsepower and 385 pound-feet of torque. It feeds the rear wheels through a sturdy Tremec six-speed manual gearbox by way of a B&M “Ripper” shifter. On a 45 degree day, our best rips at the drag strip produced 0 to 60 runs of 5.4 seconds. Further down the track, the 1/4 mile passed in 13.4 seconds at 116 miles per hour. Out on the road course, though, the Cobra turned nothing but super low lap times. Handling is neutral, with moderate body roll, and super-crisp steering turn-in. The now fully independent rear suspension keeps the tail planted no matter what… finally a Mustang that doesn’t skip from bump to bump! Throttle response is quick and the power curve matched up nicely to this track. We always had plenty of revs to work with, and no car we’ve tested has been easier to steer with the throttle. Steering one into your garage won’t be as easy, though. Despite its $55,000 price, all 300 available this year are spoken for. Our advice, get in line now for the next R!

From previous experience with the Dodge Viper ACR, we’re all familiar with the engine specs: an earth-shaking 500 pound-feet of torque and 460 horsepower from its 8 liter V10. What is not familiar, though, is this Viper’s new-for-2001 anti-lock brakes. And may we just say: it’s about time! The brakes performed flawlessly throughout our test, something we’ve never been able to say about a Viper before. At the drag strip, our bumblebee yellow tester flew through an impressive 0 to 60 run of 4.3 seconds. 1/4 mile time was the fastest of our bunch also, at 12.4 seconds and 120 miles per hour, clawing, clanking, and growling all the way. On the road course, though, the Viper slipped behind the others. Handling was quite unpredictable at the limits of adhesion. Also, steering became very light and vague. Those are traits we didn’t notice in our previous ACR test, and it makes a car with this kind of power a real hand full. But we can’t say enough about the Viper’s steep torque curve and phenomenal overall performance. It may be rough around the edges, and in corners, but being on the edge can be quite a thrill. And there is nothing dull about the ACR’s $86,000 base price! And if you want those slick black stripes on the hood and tail, that’s another three grand. We didn’t say this test was about affordability did we? 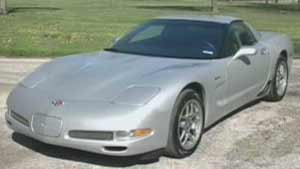 But, almost affordable is what makes the Chevrolet Corvette Z06 so impressive. The Z06 quickly garnered the most praise from our crew, too, starting with the all-new LS6 engine. It matches the Cobra R in output, delivering 385 horsepower and 385 pound-feet of torque, but it does so in a freer revving, instantly responsive fashion. In pure speed, the Z06 came in second in our acceleration tests. A 4.8 second 0 to 60 dash. 1/4 mile in 13 seconds flat at 116 miles per hour. But in the twisties, the Vette proved to be first in athletics, posting lap times a second quicker than the Mustang and a full two seconds ahead of the Viper. Steering response is instantaneous, side-to-side transitions are quick and precise, and power-on-demand is always just a flick of the right foot away. Thanks to its Active Handling stability system, a feature not offered on the others, anybody can safely drive this car fast, and a good driver can take it to the limit and beyond with complete confidence. Add in a base price of $48,500, the lowest of the bunch, and the Chevrolet Corvette Z06 quickly shapes up to be the performance car bargain of its class…and of the world. And, when the checkered flag fell on this MotorWeek test session, the Chevy Corvette Z06 was proclaimed the winner. With both the Ford Mustang Cobra R, and the Dodge Viper ACR, following closely in its tire tracks. Indeed, all three of these treats are a rare experience, and a hoot to sling around a race track. They each do more than justice to their famous high performance names, and proved to us, lap after lap, why every one is a true legend.