You could argue that Nissan played a big part in jumpstarting the whole subcompact crossover mania with their funky 2011 Juke.  Well, I guess one entry isn’t enough, as they’re doubling down on that crowded segment with the Rogue Sport. Let’s see if this one jives just as well.

The 2017 Nissan Rogue Sport may be small in size, but Nissan knows there are big sales to be had in the wildly popular subcompact crossover segment.

But, first things first. The Rogue Sport is not a smaller version of the compact Nissan Rogue crossover. It is actually a completely different vehicle. It’s our version of the Nissan Qashqai which is quite popular elsewhere, especially in Asia.

The imported Rouge Sport is 2.3 inches shorter in wheelbase compared to the Rouge, but a full foot shorter overall.

Its shorter stature, combined with the unimproved roads in many of its markets, translates into a rougher ride than the U.S. made Rogue. On the other hand, it’s size is perfect for scooting around crowded cities and fitting tight parking spots. 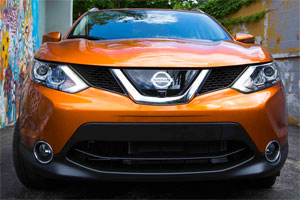 That’s where it shines most since in automotive lexicon, “sport” in the name mostly means a smaller version of something; as there’s not a strong amount of performance to be had in the Rogue Sport. Still, it feels solid and capable for a ute of this stature.

While different in design, the Sport still has a strong resemblance to big brother Rogue, from the aggressive V-Motion grille, to the swoopy hatchback-like rear with wrap around lighting. The body sides are more dynamic, as is the black cladding below.

Surprisingly, build quality inside is not quite as good as the Juke, and the materials make even the base Rogue look borderline luxury. But having said that, the Rogue Sport is far more practical than the Juke, with much roomier seating, as well additional space for cargo; 19.9 cubic-ft. behind the folding seatbacks, and 53.3 with them folded.

Gauges are simple and clear, just as we prefer them to be, and all but base trim gets push button starting. 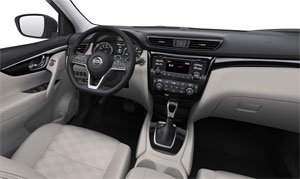 Infotainment works quite well with a nice, compact, easy-to-master control layout and very responsive touchscreen, which can include Navigation. A basic backup camera is standard, with Nissan’s Around View Monitor available.

In addition to being fairly spacious for such a small package, we found seating both in front and rear impressively comfortable.

Unlike many in the segment, including their own turbo-powered Juke, Nissan sticks with tried-and-true naturally aspirated power here.

A familiar 2.0-liter I4 outputs just 141-horsepower and 147 lb-ft. of torque; and being saddled with a CVT, only adds to its sluggish feel. Front-wheel-drive is standard, with all-wheel-drive available on all trim levels.

Indeed, anemic output and CVT trans are not on any car guy’s wish list. Our full throttle 0-60 run took a full 10.0-seconds. The ¼-mile, 17.6 at just 79 miles-per-hour. Engine noise was pronounced, sounding like a 2-stroke running on Red Bull.

The CVT does go through simulated shifts, which in daily driving keeps engine noise tolerable. 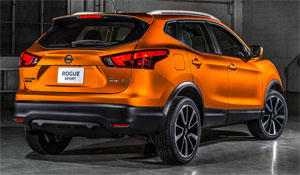 Our track impressions changed for the better on the handling course. Through the tight gates, there was decent grip and a very confident feel. Steering was a touch slow and on the disconnected side; but the Rogue Sport does what its told without much fuss.

That’s all thanks to a 4-wheel independent suspension with stabilizer bars and twin-tube shock absorbers; as well as Nissan’s Active Trace Control which uses selective braking to help pivot you around corners.

We had no issues with braking performance either. Stops from 60 averaged just 114-feet; with short, firm pedal travel, and on overall quality feel.

Basic safety systems are standard, but you’ll have to step up to mid-level SV trim to add Forward Emergency Braking, and top SL if you want Lane Departure Warning.

Government Fuel Economy Ratings with all-wheel-drive are 24-City, 30-Highway, and 27-Combined. For a slightly better than average Energy Impact Score of 12.2-barrels of yearly oil consumption with 5.4 tons of CO2 emissions.

As hot as the Rogue has gotten of late, outselling even the Altima to become Nissan’s number one selling vehicle; a scaled down look-alike is a no brainer, even with the funkier Juke still in the lineup. The 2017 Nissan Rogue Sport is more of an economy-minded effort, but one that’s big on entry-level practicality. We think it’s right sized at the right time.