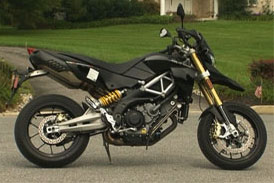 Supermotard bikes were born by simply taking dirt bikes and updating them with sport bike wheels, tires, and brakes. From there, it quickly evolved into purpose-built Supermoto bikes. And like most other things in the motoring world, more power and better performance keep getting added to that mix. And this week Brian Robinson goes Two Wheelin’ on the biggest, baddest Supermoto yet!

BRIAN ROBINSON: Supermoto bikes are so appealing, because if you spent any time as a kid riding around on dirt bikes, you can hop on and feel instantly right at home, which can a good thing and a bad thing.

Good, because everything feels so familiar; bad because your commute to work instantly becomes an Urban Motocross track where every railroad crossing becomes a jump and speed bumps become whoops. Fun, but such shenanigans can eventually lead to trouble.

So, what makes the 2011 aprilia Dorsoduro 1200 the biggest and baddest Supermoto bike yet? Well it’s all about the numbers. 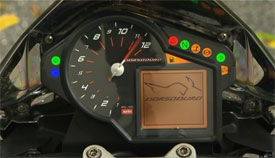 1,197cc’s and 130-horsepower; that’s the size and output of its all-new, Dual-overhead-cam, water-cooled, fuel-injected V-twin engine. It has a ride-by-wire throttle setup that allows for three different engine mappings - Touring, Rain, and Sport. You would think these modes could be changed with the “mode” switch on the left of the handlebars, but this switch actually takes you through the trip computer and setup menus. Oddly, it’s the starter button that lets you switch between engine modes.

Touring is probably the best all-around setting for everyday use, but this bike is all about fun, so why limit yourself? Keep it in Sport mode, like I did. You’ll love the immediate throttle response and can thank me later.

For a big V-Twin, the engine is surprisingly smooth. At 70 miles-per-hour it’s spinning at 4,000 RPM and is smooth as glass. Torque curve is more like a torque table, as it’s wide and flat.

The Motocross style long travel forks and single rear shock w/ external reservoir, both from Sachs, soak up every bump and ripple, giving the Dorsoduro a soft, but not floaty ride. Not soft, however is the seat, which offers all of the comfort of a vinyl covered 2X4. But it is fairly big and flat, so you can move around plenty to find the most comfortable spot.

The small, 2-piece wind deflector does a better job than expected at keeping wind off of your chest. And these plastic brush guards keep cold air off of your hands on chilly mornings. Ride height is pretty high, so if you’re under 6-feet, expect to be on your toes at stops. No complaints however, about hydraulic clutch or shifter.

I love the all business appearance of the Duro, it has that “everything you need, nothing you don’t” look about it. The frame consists of a steel trellis with attached aluminum side plates connecting to an aluminum dual sided swing-arm. Twin mufflers tuck up nicely underneath the seat, and there’s a small LED tail light that sticks out the back like a stinger. 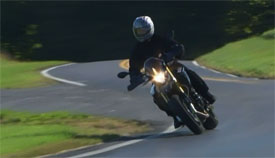 The price to own the biggest and baddest Supermoto on the road? Surprisingly, it’s affordable at just $11,999.

Fun? Yes. Comfortable? No. So, who exactly is this Dorsoduro 1200 for?  Well, just about anyone who’s looking for a fast, nimble bike and wants to add an occasional bit of excitement into their daily grind, and isn’t that what motorcycles are really all about?