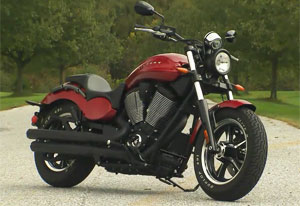 Many of us have fond memories of the muscle car heydays of the 60's and early 70’s. And while there is plenty of high performance hardware available today, for some, it’s just not the same. Well, our Two Wheelin’ guy Brian Robinson is one “dude” who is still stuck in the 70’s. And this week he’s found the perfect bike to appease his muscle car addiction.

BRIAN ROBINSON: These days, it’s not enough to build a nice looking cruiser. You need a theme. Well, as far as themes go, I can’t think of a better one than American muscle cars. So, does this Victory have the performance to match its muscle car style? We’ll be the Judge of that!

This is the 2013 Victory Judge, and it does indeed take styling cues from muscle cars of the past, primarily the 16-inch mag-style wheels, and fat Dunlop Elite II’s with raised white lettering.

The rear fender also gets a unique treatment with it’s almost fully recessed tail light, and gray exposed struts. But from there, it’s a bit more standard Victory fare, with the traditional scalloped tank. 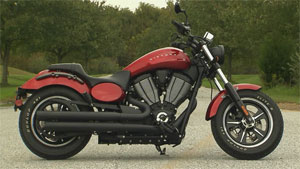 The blacked-out front end, frame, engine, and pipes all give a menacing look and allow you to keep the polish on the shelf and spend more time riding. Side covers are reminiscent of old race-bike number plates. The heavily stepped seat really locks you into position; fortunately it’s a fairly comfortable one. And it doesn’t take much time in that saddle to reach a verdict and declare the Judge one smooth operator. It even rides like a muscle car, a little choppy over bumps, but far from harsh.

It’s ready and willing to be pushed through corners, but do so too aggressively and you’ll find yourself scraping things before you’re expecting to, and then backing off a bit to a more reasonable pace.

The engine is plenty torquey and also smooth. It’s Victory’s latest 1,731cc 50-degree Freedom V-twin. Old-school air cooling and modern fuel injection work together to push 113 lb-ft. of torque through a 6-speed transmission. There’s lots of throttle travel, so just when you think you’re giving her all she’s got, there’s still another quarter turn left. Pin it, and unleash the full fury that this engine offers… big smiles quickly follow. 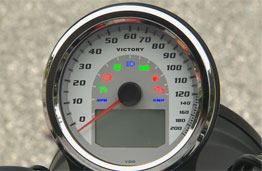 The shifter works well, not quite as clunky as a Harley, but more positive than most metric cruisers; and the clutch, surprisingly soft. Gauges are minimal, though you can bring up a digital tach. in the trip meter, but it’s not that useful, other than for me to tell you in top gear at 60 mph, the Judge’s V-twin is pumping at 2,200 rpm. Custom-style cruisers can get expensive in a hurry, but the Judge kicks it old school here as well, coming in at just 14-grand for black; add 4 hundred if you want some color.

Much like those muscle cars most of us remember so fondly, the 2013 Victory Judge is most fun in a straight line, or when cruising the strip. Still, it would be a perfect bike for the guy who’s ready to hang up the sport bike, but not quite ready to put on an old man’s bike just yet.

So, does the Judge successfully back up its muscle car style? Guilty! Now, if I could just get sentenced to life in the saddle without parole…