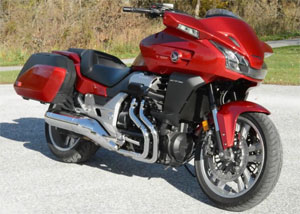 Despite a conservative reputation for their cars, when it comes to the motorcycle division of honda motor company, they’re not afraid to push boundaries or blur lines between traditional motorcycle segments. And now brian robinson goes two wheelin’ on their latest segment buster.

Brian Robinson: “By the looks of it, the Honda CTX1300 is part cruiser, part touring bike, part art deco collage; but get it rolling and you quickly find out the sum is greater than the parts.”

Honda CTX models are all about combining Comfort and Technology for the ultimate riding experience that Honda feels they are uniquely qualified to deliver. And the 2014 CTX1300 makes a good case for Honda indeed having a secret formula that no one else can quite match.

This is a touring bike that looks and has the riding position of a cruiser, but with almost retro style and handling attributes more accustomed to sport-tourers. 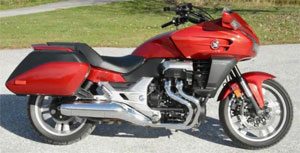 In back, the fat 200-series tire pays homage to the custom bike craze that now seems to be more about baggers than choppers. Those medium-sized, nicely integrated side cases can’t be removed easily and the locking latches are a bit bulky to operate; neither of which would be a deal breaker for me.

And it’s the engine that is the real star of this show, 1,261ccs of smooth, effortless, liquid-cooled, V4 power that comes from the much beloved and now departed ST1300. There’s a nice rumble at start up, but it quiets down quickly as you’re on your way. 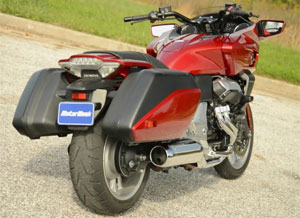 Operation is so seamless that you never get a vibration or any indication of it actually running, even as you approach red line, which you don’t really need to do, thanks to plenty of torque down low.

Somewhat surprisingly there’s just a 5-speed transmission connected to it; and even more unexpectedly, with all of the info provided in the car-like instrument panel there is no gear indicator; which would come in handy, as with that aforementioned smoothness it is difficult at times to tell which gear you are in.

Riding position is just about perfect, a bit stretched out, with not too much weight placed on any particular piece of your body.

Except for a mildly awkward “get to know you” phase, the CTX proved very maneuverable at all speeds, and felt lighter than its 724-pound curb weight, as most of that weight is down low, including the fuel tank that’s nestled behind the engine. 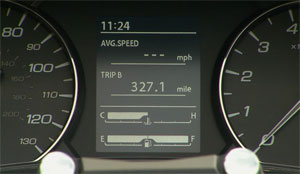 I found the suspension to be a mixed bag. The CTX1300 floats down the road soaking up minor to medium sized bumps almost without notice; but if you come across some larger road imperfections you definitely know it.  Things seem to bottom out and the bike quickly gets nervous feeling.

Also, while the chopped windscreen certainly looks cool and keeps the wind off your chest, it seemed to channel most of it directly at my head.

Another unexpected element was a remix of the Universal Japanese Motorcycle switchgear, with the turn signal and horn switches flip flopped. No big deal really, just a few embarrassing toots of the horn at a few intersections. 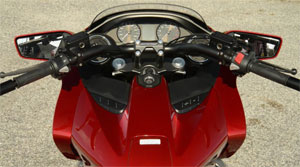 The seat is wide and plush with some lumbar support in back; and all day comfortable for sure.

Add to that, at $15,999, the CTX1300 is a lot of bike for the money. An available Deluxe model adds ABS, traction control, self-canceling turn signals, and an audio system for $1,500 dollars more.

So, those that are looking for a Honda ST replacement, the 2014 Honda CTX1300 is not it. But, those looking for something more progressive looking, with lots of comfort and style; that blurs the lines between cruiser and touring bike, this just might be your bagger.