Despite all of the many different segments of motorcycles that have taken shape over the years, it’s still cruisers that eat up the most miles on America’s byways. But not all cruisers are not created equal as we’re about to find out. 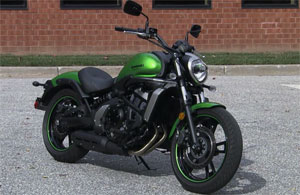 BRIAN ROBINSON: “When the original Kawasaki Vulcan hit the streets in the 80s, it may have looked the part of a cruiser, but anyone who owned one would tell you it felt a lot more like a sport bike. Well, in the 30 years since, sport bikes have gotten a lot sportier and the Vulcan has become a more of a traditional cruiser. This Vulcan S looks to turn back the clock.” Not in a retro way, but by bringing the performance aspect of the Vulcan back to the forefront.

Its water-cooled 649cc parallel twin engine comes straight from Kawasaki’s 650 Ninja. Well not straight, as it took a detour through mid-range torqueville. Yeah it’s a parallel twin and not a V, but that’s fitting for this different type of cruiser; and the first time you rev it to 9,500 you’ll forget all about how the cylinders are arranged down below and concentrate on holding on to the bars up top. 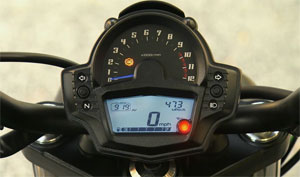 And before you start scoffing at the small size, this torquey twin has got plenty of power to play with, and unleashes all of it right up to redline. Yet somehow it remains incredibly smooth while doing so.

Kawasaki likes to think that this bike’s biggest appeal will be its Ergo-Fit adjustability; as there are multiple seats, handlebars, and foot peg mounting points to choose from, enabling a custom fit before you leave the show room.

That’s all well and good, but I think this bike’s best asset is that it handles like an entry-level sport bike, yet has the style and comfort of a cruiser. Even the brakes, despite just a single disc front and rear, are great, whether you go with the optional ABS or not. 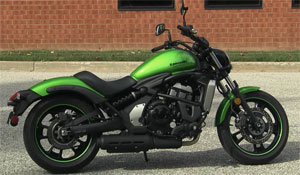 The mirrors are little oddly shaped, but they are vibration free and provide a great view of your 6. After a few weeks of ride time, the only annoyance I could really find, is that if you let it drop to idle, when getting back on the throttle there is a definite hesitation there. No worries, just keep the RPM up like you would in a sport bike, instead of lugging along like you normally would in a cruiser.

Now, as for those looks; well the cruiser shape is there, but it’s certainly a unique take on the theme. The wrap around perimeter frame, almost horizontally mounted single rear shock, and under-mounted muffler are indeed not the norm.

It is a slick looking bike, but there are some elements like the multiple plastic pieces and a rear fender that over promises on the under-delivered 160 rear tire that keep it from truly achieving custom cruiser-like cred. 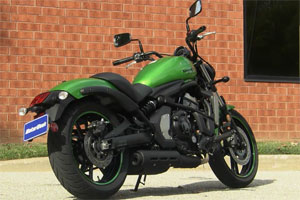 Controls and instrumentation are all straightforward, with the small digital display giving all of the necessary info and then some. There’s just a single, surprisingly comfortable seat, you’ll have to pony up some extra coin for a rear perch and pegs if you plan on picking up hitchhikers out on the open road.

6-speed transmission, chain dive, and double-sided swingarm are all par for the middleweight sport bike course.  Pricing is just $7,399.  Skip the ABS and keep 400 bucks in your pocket.

The 2015 Kawasaki Vulcan S is certainly not alone in providing sporting performance with a cruiser platform, but you could make an argument that the original Vulcan started that whole theme. And we’re glad it has returned to it.