We’ve put a lot of miles on this Honda. And when it comes to long distance touring, it really can’t be beat. There’s all the space for luggage, the legendary comfort, every technology doo-dad you could want, and even a smooth running 6-cylinder that helps it eat up miles like no other motorcycle on the road…  wait, just what are we talking about? 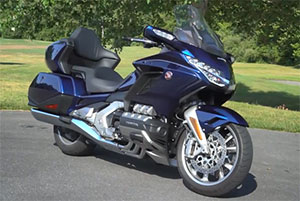 As the most popular non-cruiser heavyweight touring motorcycle of all time, the Honda Gold Wing was at a crossroads. Satisfy and aging motorcycle population that depends on them, or go after younger buyers by packing it full of the technology they feel they need, let’s take a look at the leaner and meaner Gold Wing.

As much as we all see the Honda Gold Wing as a Motorbago two-wheeled RV, the first Gold Wing wasn’t really designed with that in mind at all.

Rather, the original GL1000 was meant to be a high performance do-it-all motorcycle with great comfort. Really, the Gold Wing as we know it, was Honda’s response to all of the aftermarket companies that offered touring accessories for it. And over the years, it has evolved into the ultimate touring machine that it is today; with refinement, comfort, and luggage capacity found nowhere else. 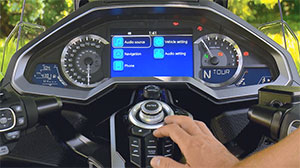 Chief priority for the 6th generation Wing seems to have been removing weight, and mission accomplished by almost 100-lbs. You notice it as soon as you flick up the kickstand, and even more so in slow speed exercises.

On the technology front, there’s a clear and comprehensive info screen and intuitive controls; Honda’s 4-wheeled side could learn a thing or two in functionality when it comes to the interface.

As before, most mechanical bits are well-hidden, which is a shame as you’re missing out on a lot of updates; including a new double wishbone front suspension, not unlike BMW’s Duolever design.

It all works to provide a much more enjoyable riding experience. Not exactly a slouch in the handling department before, but now it borders on sport-touring territory; feeling more than competent in just about any situation you expose it to.

Still a flat-6 providing the power; it has shrunk a little in physical size and weight, and output remains about the same; but the torque curve has been broadened, and the exhaust itself is over 7-lbs. lighter than before. 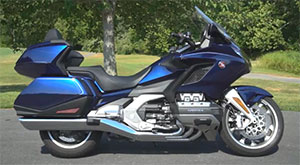 Transmission is a 6-speed manual, or a new 7-speed DCT.  Naturally, we wanted to tryout the DCT, and it works very well. Both Sport and Tour modes have distinct personalities; plus, in addition to reverse, there’s a Walking Mode for slow speed maneuvering, since you no longer have a clutch to modulate.

An electronically adjusted windscreen is standard and lowers automatically upon shutdown, but has a memory, returning to where you had it before you turned everything off, once you get rolling.

Now, news is not all great, especially for those that fully load their current Gold Wing to capacity, as there is now much less of it, down from 150 to 110 total liters. My advice, take less or get some modern clothing that packs up smaller, or just wear the same clothes every day and get on with it, there are roads to conquer. 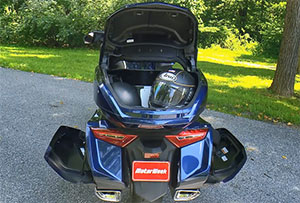 The Gold Wing as we all think of it, is now this Gold Wing Tour; the standard Gold Wing, comes without the top case among other things, and replaces the previous F6B.

My apologies if all of the weight loss talk had you thinking you got sucked into a Jenny Craig infomercial. But, it is what it is; much like the 2018 Honda GL1800 is what it was, there’s just less of it to haul around. And in a way, it’s gone back to its original roots as a comfortable do-it all motorcycle that you just don’t want to stop riding.