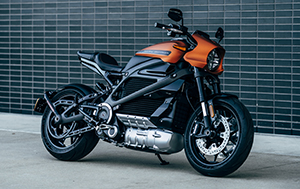 That’s right, the brand known as the Harley-Davidson Motor Company finally has a motorcycle with an actual electric motor instead of an internal combustion engine. It’s called the LiveWire, and it’s unlike any Harley ever.

Starting with where the V-twin would typically be; here, you’ll find a 15.5-kWh high-voltage lithium-ion battery with cooling fins.  Underneath of it, is the H-D Revelation, a water-cooled 78kW permanent-magnet motor rated at 105-horsepower and 86 lb-ft. of torque, which can deliver the LiveWire and rider to 60 in just 3.0-seconds.

A single speed gear-set allows sending the power to the rear wheel through a familiar Harley-Davidson belt-drive setup.

The biggest compliment to give right away is that it feels like a real motorcycle; meaning, you hop on, fire it up, and get to riding.  It never feels like some sort of science project, or proof of concept vehicle that you need to be cautious or gentle with. 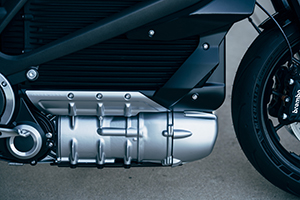 They’ve even engineered an engine-like pulsing into the bike when at idle, to remind you that you are indeed on a living/breathing machine.  And it’s not silent either.  No simulated V-twin rumble thankfully, but there is a constant whirring sound typical of a high-performance electric motor.

Charging at home can be done overnight on a typical household Level-1 120-volt outlet; but it also accepts DC fast charging, for a full-charge in about an hour.  And of course everyone’s 2nd question, after “that’s a Harley-Davidson?”, is “how much range?”  Well, range ranges from 95-miles on the highway to up to 146-miles in low-speed city traffic.  All highly dependent on your riding style obviously; and there’s more than enough comfort in the seat to use all of those miles at one time.

A host of car-like safety systems including ABS and traction control are standard; as is front-wheel lift mitigation.  All with unique settings for Sport, Road, Rain, and Range ride modes, with the ability to customize your own individual setup. 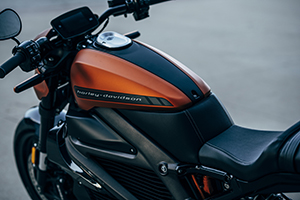 Some practical things I noticed that could be improved on; the mirrors could be out a little wider so that I’m not looking at my forearms so much, and depending on where your thighs fall, this protruding connection point in the frame can rub you the wrong way.

Pricing starts at $29,799, with your choice of 3 colors.  As an incentive, Harley’s partnership with Electrify America gets you up to two years of free charging at any of their DC fast-charging stations.

The 2020 Harley-Davidson LiveWire is truly an altogether new and different Harley-Davidson experience.  Many of you watching are already thinking of reasons not to like it, and the Motor Company knows that this will not appeal to the vast majority of their current customers.

But, the truth is, it’s not built for them, but for their grandkids; those that put a higher priority on technology and sustainability than tradition.  Harley-Davidson is wise to prepare for those buyers to drive them through their next 100-years.