Chances are, if you’ve taken any kind of motorcycle rider training over the last 30 or 40 years, you did so on the seat of a Honda Rebel. Now, Brian Robinson shows us that Honda has much bigger plans for the Rebel. 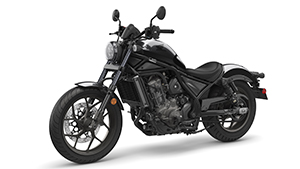 Brian Robinson: The 2021 Honda Rebel 1100 is the biggest Rebel ever. 1,084ccs, with its engine coming from an unexpected place; not another cruiser, but Honda’s Africa Twin adventure bike, which is just the beginning of where this cruiser breaks from segment norms.

It’s a liquid-cooled parallel twin not a V; and handles air differently here than in the Africa Twin, both on the intake side and with a unique exhaust. Honda also adjusted the timing and gave it unique tuning as well.

Further evidence that Honda is not so much worried about traditional cruiser elements, is provided by the available DCT automatic transmission. Honda is certainly not afraid to put automatics out there; and with each new model that features it, it gets better and better, leaving less things for us to complain about.  A 6-speed manual is standard if pulling a clutch lever is still a necessary part of the riding experience for you.

Weight is around 500-lbs.; and much like Kawasaki’s Vulcan line of cruisers, when you find yourself on a curvy road, you quickly forget you’re on a cruiser. It feels well-settled in corners, with plenty of ground clearance to avoid a spark show when you lean in. 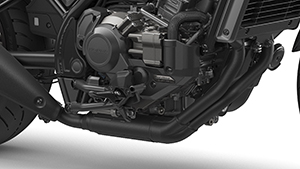 Just 3.7-inches of travel in the dual rear Showa shocks, but they in no way feel entry-level, soaking up hard impacts well.

The engine is not super torquey, but neither does it run out of steam as you push revs towards 8,000 RPM.

Same basic look as the smaller Rebel which got a rework back in 2017; getting a more modern design, stepping up to 300ccs, and adding a 500cc version.  But there’s much more engine hanging from the tubular steel frame here in the 1100.

And since Rebels always tend to ride alone, just a solo seat, which puts the fender on display to draw attention away from that ginormous muffler. Under the seat is a small storage space, as well as a USB port for charging your phone.

A simple round gauge display with digital readouts, covers all the basics and then some; assisted by an array of warning lights off to the side.

The Rebel also shares basic ride modes with the Africa Twin: Standard, Sport, and Rain manage power delivery and Torque Control; as well as engine braking if you opt for the DCT. 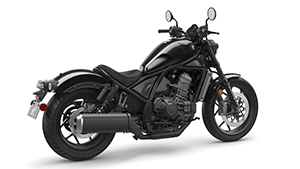 People generally look to cruisers for a low seat height, and that is indeed the case here, at 27.5-inches. Foot pegs are not as far forward as most cruisers, more in a standard position. But, with no bottom cradle of the frame to mount them to, they’re attached to these long brackets coming off the back part of the frame; looks weird, but works well enough.

While giving current Rebel riders a bigger option to step into is surely part of the plan; I wouldn’t limit this Rebel to just that cause. Image may be king in the cruiser market, but there are still plenty of riders for whom reliability, comfort, and fun are just as important.  All things Honda is known for, and delivers better than ever, here in the 2021 Honda Rebel 1100.