The automotive shift from fossil fuels to battery power has really picked up steam in the last year; and things are also changing rapidly in the motorcyle world. But, as Brian Robinson shows us, there's on brand who has a clear head start on the rest. 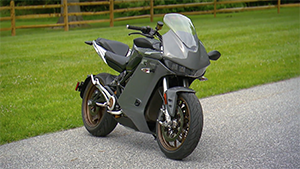 Brian Robinson: Zero Motorcycles has been around since 2006, and already has a full lineup of all-electric motorcycles. Constant refinement and development over the last 15-years has led to this… the SR/S. The 2021 Zero SR/S is the most ambitious offering yet from this Scotts Valley, California based maker of all-electric motorcycles. It’s also the next chapter in what began last year with the debut of the SR/F model; as this SR/S is essentially a full fairing version of the SR/F.

And while the look is all sportbike, the riding position feels more like an adventure bike; there’s an actual handlebar, and foot pegs are mounted high enough to be out of the way, but not to racebike rear-set levels.

Startup procedure is a little unique, no need to hit the start button, just turn the key, lift the kickstand, wait for the green light, and off you go.

Seat comfort is also more than acceptable; no problem running out the SR/S’s full range, that’s due to its slightly extended rear section compared to the SR/F. With its 14.4-kWh Z-Force battery, Zero claims a range of up to 161-miles, which would require lots of slow speeds and gentle throttle application. Realistically, riding it like it seems to want to be ridden, put me more in the 110-120 mile range.

Where Zero has really put in the hard work is in their Z-Force 75-10 motor; 110-horsepower, 140 lb-ft. of torque. And as with any EV no matter the number of wheels, it really is all about that torque, plentiful and delivered immediately; right up to the top speed of 124 miles-per-hour (or so I’m told).

Despite no need to store fuel, Zero has kept a traditional fuel tank look and used the space as a very practical storage area. The charge port is located just behind it. 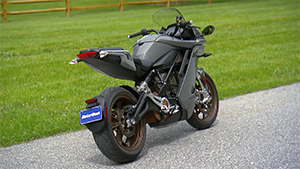 The large gauge display is not a touchscreen; and while that would have been easier to some, controls to operate everything are fairly intuitive. Zero has minimized actual switches by maximizing the functions of this sliding mode button to its fullest, and even uses the start button for engaging cruise control. Yes it has cruise control, as well as heated grips, if you upgrade to the Premium model.

Other practicality bonuses include the mirrors; they are mounted very low, vibration free, and provide some of the most unobstructed rear views of any motorcycle I’ve been on.

Like all battery powered vehicles whether 2-wheeled or 4; price is still the major obstacle when compared to fuel-burners. But, Zero has been in this business for a while now and has an advantage over most, with models starting as low as $9,495. This top of the line Zero SR/S starts at $19,995; the Premium model is just 2-grand more.

While electric motorcycles are not for everyone just yet, that day is coming eventually, and Zero, more than anybody else, is ready for it.  All of the range and charging concerns aside, the actual riding experience of the 2021 Zero SR/S is pretty fantastic, and isn’t that what riding a motorcycle is all about.