Now that Indian Motorcycles has firmly re-established itself as a major part of the American cruiser landscape, it’s time for the brand to branch out and explore new things. But as Brian Robinson tells us, at Indian, even what’s new comes with a sense of history. 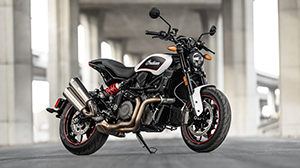 Brian Robinson: The Indian Motorcycle brand does indeed have a very long history here in the U.S, but this FTR 1200 is not so much about the past as it is about their future.

Racing doesn’t generally come to mind when you think of Indian Motorcycles or American cruisers in general. But, whether you’re talking the board track insanity of the early 20th century, or the hundreds of dirt ovals scattered across this country, Indian has been a major player for as long as it’s been around.  And that continues to this day with their factory team FTR750 regularly winning in American Flat Track racing.  And that’s where this 2022 Indian FTR S comes in.

It’s important to note, this is not a street version of a flat-track racer, but a bike inspired by one; which is actually a better scenario.  Because as awesome as it sounds to be riding a flat track bike on the street every day, it wouldn’t really be an enjoyable experience.

But it’s not all flat track here, as the tidy tail section, upswept exhaust, big fork tubes, and 17-inch wheels with Metzeler Sportec tires, all come from the modern sportbike playbook. 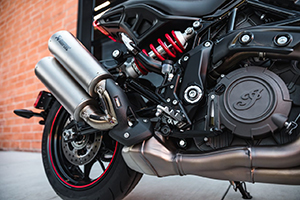 The S also comes with Indian’s well-designed 4.3-inch Ride Command LCD. It works both as a touchscreen and with trigger and toggle switches. It does fall well outside of your general field of view, especially with a full face helmet on so it requires a clear look down to see by how much you’re currently violating the posted speed limit.

And that’s easy to do as the power is amazing. This liquid-cooled V-twin offers all of the torque that you expect a big twin to deliver, yet seems to add plenty more on top as you keep the revs building, and it will rev, though not with I4 sportbike smoothness.

The FTR actually first went on sale in 2019, and most of the updates for ’22 are all about improving the riding experience. That engine has been retuned for better cold start performance, and fuel delivery improved for smoother and more linear throttle response. Measures were also taken to divert engine heat away from the rider.

Wheel sizes also change from 19-fronts and 18-rears to 17s all around, improving handling, and greatly increasing your options for performance tires.  Which only adds to the spectacular suspension setup.

The FTR feels nothing like a cruiser, rather like a big hairy supermoto bike that’s about to spit you off, while at the same time encouraging you to do things that could possibly be detrimental to your driving record.

The 2022 Indian FTR S is one of those bikes that defies categories; becoming just an incredibly fun machine that delivers a more rewarding experience the more familiar you become with it.  All of this from America’s first motorcycle brand.