BMW is well known for their smooth, powerful inline 6-cylinder engines. No other brand has embraced the inline-6 as much or taken it as far. Well, now BMW takes it to a place even they haven't been to yet. 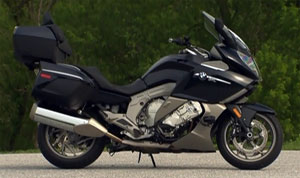 ile already well known for building comfortable long distance touring machines, BMW has taken it to a whole new level with this bike, the K 1600 GTL. Just looking at this bike makes me want to take off and not stop riding until I'm in the next time zone. Everything about it screams road trip!

Especially the fuel-injected 1,649cc inline-6 engine which puts out 160-horsepower. Its narrow 72-millimeter cylinder bores, with just 5-millimeters between them, help keep the width to under 22-inches, barely wider than a typical 4-cylinder.

Overall weight of the bike is 776 pounds. While heavy, that's significantly less than a typical cruiser-based touring machine. But just because a motorcycle weighs 776 pounds doesn't mean it has to feel awkward. It's all about good design and balance. And even at slower speeds the K 1600 GTL is easily maneuvered. You don't feel disconnected from the front end at all, as on some previous K touring bikes. As speeds increase, the weight melts away, and the GTL feels like a much smaller bike.

Electronically adjustable suspension lets you choose Comfort, Normal, or Sport modes depending upon your mood or road conditions. The hydraulic clutch is super light and gears click with precision. 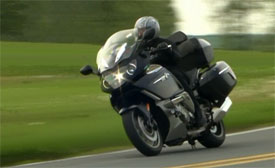 The windscreen can adjust to almost fully vertical, keeping wind, rain, and just about everything else off of both rider and passenger, while a deep and wide seat offers all day comfort for two.

Increasing comfort and luxury usually comes at the expense of fun, but not so with this machine. After the first few corners, it's easy to forget that you're on a touring bike. Over 40-mpg's and a 7-gallon fuel tank gives you a 300-mile range between fill-ups, though that will require a bit of restraint, as I was only able to see about 280.

Every aspect of this bike is incredibly smooth. If you're looking for a rough-around-the-edges, rumbly-type of motorcycle experience, look elsewhere.

Creature comforts abound. As well as high tech features new to the two-wheeled world, like Adaptive Head lighting which aims a Xenon beam into the corner as you lean into a turn. Combine that with low mounted LED lighting, and you can really light up the night.

BS and Dynamic Traction Control are also part of the package, with settable driving modes for Dynamic and Rain riding, as well as normal, or Road. The gauge package includes a large analog speedometer and tachometer, with a configurable multidisplay. Controls have been simplified by a Multi-Controller on the left handgrip. It's just like iDrive, only much more intuitive.

The 33-liter side cases and a 49-liter top case offer plenty of storage space and lock and unlock electronically with an automotive style key fob. Additional small item storage is located on both sides of the fairing.

While not the first inline-6 motorcycle engine to hit the streets, it is the first since the 80's and the first for BMW. And we couldn't think of a better brand to bring it back. The fact that it's got such an awesome chassis wrapped around it just makes it that much better, and we'll take this 6 on the road anytime.