Most of our reviews here at MotorWeek are of the four wheeled variety… it’s just the way we like to party around here. But our friends at RetroMoto have found a group of gearheads in Brooklyn that like to celebrate a little differently… 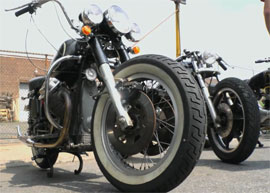 Matt: We’re in New York City today to check out a classic bike block party in Greenpoint, Brooklyn. I gotta tell ya, I’m really excited for this one. It brings out such an array of people, bikes, tricked out bobbers -  you name it, it’s here. So come on, follow me, we’re gonna go get right in the mix of things.

Matt: So I’m sitting here with Erik Green who’s one of the coordinators for the event. Umm, how’d this whole thing come about?

Erik: Uh, my friend, Taka, from Peak-Point Cycles in Queens, New York, he had this idea to do a little backyard motorcycle show.

Matt: Obviously it’s not in the backyard anymore. Uh, a lot of people turning out.

Matt: This is a big deal now. Umm…

Erik: This is probably our best event.

Matt: I lived in New York City for awhile and I had nowhere to keep a bike, I mean, (laughs)

Erik: The last three or four years there’s been an explosion of, like, little shops that opened up, and uh, storage facilities so that it’s a lot more motorcycle friendly.

Matt: Well you can’t exactly park this on the street. Obviously you keep it in your shop, but… 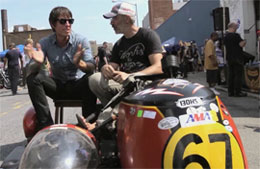 Matt: Tell me a little bit about what we’re sitting on. This is a sidecar racing motorcycle.

Matt: Do you go all over the country? Do you just get it out when you can?

Erik: We’ve done about five races this year already. We went up to Canada last week. We went to Mid-Ohio a couple weeks ago.

Erik: And, umm, so we got second, he got first, but we got the lap record.

Matt: That’s awesome. Hey listen, I really appreciate you taking some time out…

Matt: …to talk to us today. Had a great time.

Matt: Good luck with it.

Matt: So, I’ll see you around.

Matt: Now in its tenth year, the Greenpoint block party has really come into its own with characters from all over, and all walks of life. You’ll find plenty of inspiration here. 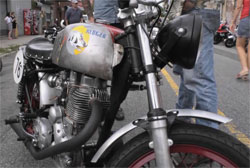 Matt: I just ran into Leon, from Cycle Icons, and his Royal Enfield Badger. Some of you may have seen this on the internet. It’s been getting a little bit of buzz. What can you tell me about this?

Leon: I’ve always kinda described this as, not just a street bike, but we ride it to the races.  We race it.  So it’s got a lot of dimensions to it.

Matt: Just like they did in the old days. That’s very cool. Uhh, how many races have you had this thing on?

Leon:  We finished. Umm, which, not to damn with faint praise; the bike got finished on the Thursday, we rode it to Ohio on Friday, got there Saturday,  raced Sunday…we had zero development on the bike. Uhh, not the perfect way to do it, but the fact that we did it, finished both our races, I was very proud.  So I’ll count that as an accomplishment.

Matt: Yeah. Well I’m very excited to see what happens next with this bike and everything else. And thanks so much for talking to us today.

Leon: Thanks. Thanks so much.

Matt: Officially called the New York Vintage Motorcycle Show, it’s a great day of camaraderie for people with at least one thing in common – classic bikes. Check it out if you get a chance. This August, Sunday the 25th, in Greenpoint, Brooklyn.

Matt: Can I?  Awesome. Thank you. We’ll see you next time.