Motorcycles come in all shapes and sizes, from mopeds to monster bikes. But, here in the U.S., it’s still the cruiser that makes up the majority of bike sales. But, today’s cruisers are packing more and more performance in and around their frames, but none quite like this one! 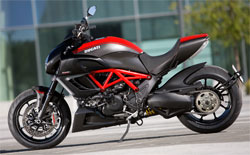 BRIAN ROBINSON: While not exactly a cruiser, the Ducati Diavel Carbon is unlike any bike Ducati ever built. In fact it’s unlike any motorcycle ever built. Ducati doesn’t actually call the Diavel a cruiser. But, with its long wheelbase and 28-degree rake, it’s hard not to make comparisons to power-cruisers like the Harley-Davidson Vrod and Yamaha Vmax.

Most of the Diavel’s parts are new, except for the frame and engine, which come from Ducati’s Multistrada 1200. That engine is Ducati’s water-cooled 1198cc Testastretta L-twin.  Horsepower is 162, but throttle-by-wire and adjustable engine mapping allows for a reduced output of only 100 horsepower for riding in slippery or urban conditions. Exhaust is a beautiful 2-into-1 design with dual mufflers. And, much like a fellow Italian Ferrari, if you don’t like the sound, check your pulse, you might not be alive. Everything is kept cool with two radiators and an oil cooler in the belly pan. 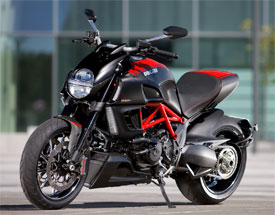 The overall look is high tech sportbike meets sci-fi alien-invasion, with lots of carbon fiber thrown in. Depending on what angle you view it from, it can either be muscular, beautiful, or downright nasty. A single sided swingarm holds a wide 240 rear tire, with a license plate mount that would make most custom bike builders jealous. The seat is comfortable enough, and the riding position is very good.  There’s a fairly cruiser-like reach to the bars, but footpegs are set pretty far back, so you still feel like you’re flying, not lounging.

The shifter is not as smooth as some, but it was mostly noticeable when tooling around town and not working it aggressively. Mirrors are wide enough to be very useful and stay calm at all speeds. A deployable passenger grab rail, removable seat cowl, and fold out footpegs, transform the Diavel from a solo racer to two-up friendly in just a few minutes. There’ s plenty of LED lighting all around, including large vertical turn signals.

It doesn’t take more than a few seconds in the seat to figure out that performance is also more Ducati than cruiser. With all of that horsepower on tap and a very uncruiser-like weight of only 441 pounds, acceleration is more than brisk. Ducati claims a 0-60 time of 2.5-seconds. Our limited time with the Diavel didn’t allow us to confirm that, but I’m a believer.

The name Diavel comes from a Bolognese dialect of Italian and means devil, and much like its namesake this bike is always trying to get me to do bad things. Handling is every bit as strong as acceleration, but with that big rear tire, it can feel a bit awkward while doing it. You have to just throw it in the corner and trust it’ll stick, and it usually does.

Multi-setting traction control and ABS are available to help when it doesn’t. Brakes are triple disc Brembos. Gauges consist of two info screens, an upper display with digital speedometer and tach, and a customizable color Thin Film Transistor screen that gives even more information, and lets you adjust all of the many driving modes. And, there’s even an automotive style key fob for keyless ignition; just hold the ignition switch down and everything comes to life.

As with anything Italian, the 2011 Ducati Diavel Carbon is not cheap, coming in at $19,995. It’s easy to question why Ducati would build such an outrageous bike. Much in the same way I was skeptical when luxury car makers started building SUV’s.  Who knew that people would pay big money for leather-clad pseudo off-roaders? Well, people a lot smarter than me, that’s who. In much the same manner, Ducati sees a market for a motorcycle that packs all of the performance of their legendary sport bikes into a more comfortable package. Hmm… well, now that I’ve put it that way… it’s a devil of a good idea!