While he may not be born to be wild, that hasn't stopped our Brian Robinson from touring this great land firmly planted in the saddle of a motorcycle. And this time around he's on a bike that will not only eat up the miles, but turn some heads as well. 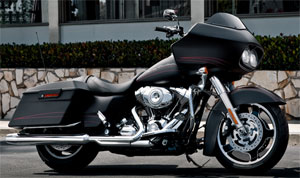 We've all heard that sound before and know it comes from Milwaukee, Wisconsin. Now, Harley-Davidson has made some big technological advancements in recent years, but for Harley buyers it's still all about the sound and the style.

That sound comes from Milwaukee's latest version of the Twin Cam 96. The rubber mounted, fuel injected V-Twin puts out a whopping 93 lb-ft of torque. There's a whole lot of shakin' going on at idle, but once you get rolling, it smoothes out very nicely.

When it come to style, the Road Glide has always been kind of the oddball in the Harley line-up with its pointed frame-mounted fairing and twin headlights. It seems to have embraced that role and now with Custom in the name, you can expect a few unique styling touches like a new two into one exhaust and a new tail light assembly that, combined with inserts between the saddlebags and rear fender, really give the tail end a smooth, low look.

The fairing houses gauges for fuel level, ambient air temperature, voltage, and oil pressure; as well as two handy storage bins, though they are not the easiest to access when in motion. And if the Harley V-twin rumble is not enough music to your ears, you can send some more melodies to them through the 40 watt two speaker Harmon-Kardon sound system.

The dual, lockable saddlebags are narrow, but deep. They close with a single latch and proved to be perfectly water tight on our ride through a brief but fierce Mid-Atlantic thunderstorm. And since few Harleys leave the dealership the way they left the factory, Harley-Davidson decided to include a few upgrades on our test bike, like this fairing cover, taller windscreen, and easy-to-use Garmin GPS. 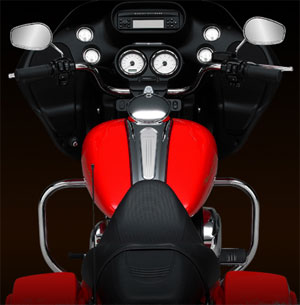 With a name like Road Glide you expect to be able to tackle long distances in relative comfort, and you can. The adjustable air suspension in rear keeps the ride smooth and solid even though it's been lowered an inch. Our only complaint is you do get quite a jolt up the spine over harsh bumps.

And if you've spent any time on Harley-Davidson touring models you know they handle way better than an 800-pound two wheeled machine should. And, you can lean them over quite a bit before you start scraping parts.

Having the fairing mounted to the frame instead of the forks seems to lighten up the front end and also keeps wind gusts from providing unwanted steering inputs.

Comfort and custom styling rarely come cheap in the motorcycle world, so expect to shell out $19,000 for a Road Glide Custom, or FLTRX in Harley-speak.

With over 70 percent of the touring motorcycle market, Harley-Davidson obviously knows its customers and what they are looking for in a touring motorcycle. And while many of their buyers go for style over outright comfort, with the Road Glide Custom you don't have to choose.