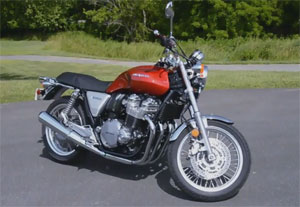 While there has been a “CB” in the Honda motorcycle lineup seemingly non-stop since 1959, it was the 1969 CB750 that set the stage for what would become known as the “universal Japanese motorcycle”; 4-cylinder engine, big flat seat, chrome fenders, steel cradle frame, no frills, and all fun. Well the guy having all that fun is Two Wheelin’s Brian Robinson. So let’s ride along and see how the “CB” tradition is going strong.

BRIAN ROBINSON: “Styling trends may come and go, but one theme that always seems to be in play is retro, or a modern interpretation to someone else’s design, unless of course the design was yours to begin with, much like this CB1100 EX.”

This is actually the 2nd relaunch of the CB1100 here in America, as Honda first brought this retro-styled standard back to the U.S. in 2013. But, it turns out it was a little too retro and not modern enough to attract many buyers, so Honda stopped importing it just two years later.

Well, now there’s an updated 2017 CB1100 EX, and Honda hopes this one has the right mix of something old, something new.

Some may not be fans of the mishmash of metals; blending painted, chromed, and polished pieces; but to me it helps it look period correct to what you would have seen in the 70s, more than a bike that just rolled out of a Honda showroom. 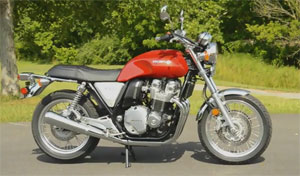 And indeed I did get quite a few compliments on my “nice old bike” from casual observers.

Other modern considerations taken with this EX include a new 4.4-gallon fuel tank with a seamless design, and LED head and tail lights.

An inline-4 stretching across a cradle frame has been a CB hallmark since 1969; and here there’s 1,140ccs worth. It’s air-cooled, with a sizable oil cooler aiding the process.

Twin mufflers are smaller than previous, and have been re-tuned to allow a little more mid-range torque. The sound they emit is still classic Japanese 4-cylinder. 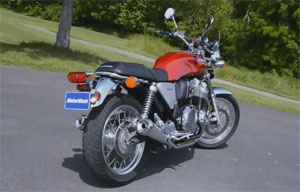 The engine makes really good power, but delivers it more like a care package than hate mail; unless you find yourself north of 6,000 RPM; where it gets a little more interesting. It also gets a little buzzy at those upper registers of the tach, but it’s not like you have to run it up there if you don’t want.

Typical 6-speed transmission here, but added this year is a new assist slipper clutch that eases lever effort as well as smooths out downshifts.

The EX looks small and rides even smaller. Though it stays pretty solid feeling, not anywhere near the flex you would have gotten in the 70s; but there is still a fair amount of nose dive on braking.

All day rides, not a problem; with that wide flat seat offering good comfort, the Showa suspension with twin rear shocks soaking up all bumps large or small, and a classic relaxed riding position.

Gauges are clear and easy to read with a small info center nestled in between; all nice and simple, and now trimmed in chrome. 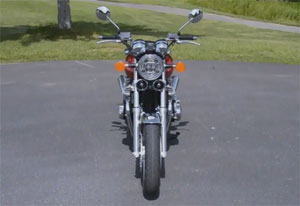 Pricing starts at $12,199, so it’s not exactly one of the many motorcycle bargains that are out there right now.

But that’s certainly not too bad for a daily trip down memory lane. And that’s exactly where Honda would like to take you with the 2017 CB1100 EX.