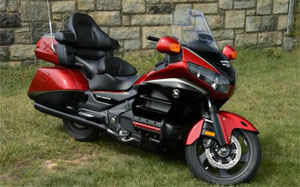 Although Honda didn’t invent the concept of the “touring motorcycle” when they introduced the Gold Wing for 1975, there’s no doubt that over the last 40 years they have perfected it. And, as you might expect, Honda is celebrating the 40th anniversary of their king of the road.

BRIAN ROBINSON: “Though no longer built here in the U.S., it’s hard to imagine another motorcycle built more for here than the Honda GL, or Gold Wing. It’s been the long distance ride of choice for many a rider; let’s find out why.”

From its beginning, the Honda GL was designed for reliability and comfort; fully encapsulating what long distance motorcycling is all about. All with a friendliness to it that made you never want to stop eating large quantities of miles.

Well, after 40 years, nothing has changed. But it’s no longer alone in that mission, as a host of American and import brands have taken the same formula and become quite successful with it as well. 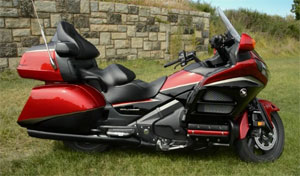 Like most 40 year olds, the Gold Wing has put on some weight, now over 900-lbs. of Winnebago on 2 wheels.

1,832ccs of flat-6 are more than enough to get it moving, however. Power is delivered ultra-smoothly through shaft drive, while twin mufflers channel the exhaust out the back almost silently.

Over 5-generations, the GL has certainly evolved, and while 2015s are not all-new, rather a continuation of the gen launched in 2001, they all do come with some trim updates and special 40th anniversary badging.

If you’ve never ridden a Gold Wing, there are some peculiarities that make it unique. For one, there are just foot pegs for the rider, not floor boards like most cruiser based tourers. Here, it’s the passenger that gets the premium foot accommodations. 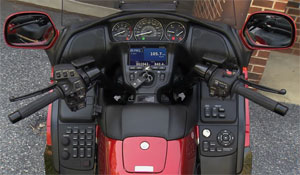 And if you glance down while riding, you’ll see enough buttons and switches to resemble and an airplane cockpit, but the optional navigation unit is integrated very nicely in an almost automotive manner.

Still, it’s not the easiest NAV to program, and graphics are similar to what you would have seen in a Honda Accord 10 years ago.

The windscreen is manually adjusted, but even at its lowest setting it creates quite a large pocket of air around you.

There’s lots of storage space of course, with a remote locking trunk, and on screen reminders if one of your cases isn’t shut completely.

What else can you say about the seat other than it’s huge, plush, and by far the best perch for your posterior in the 2-wheeled world? 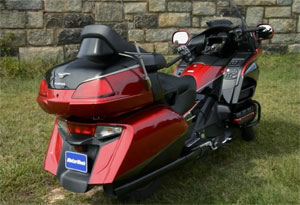 The Gold Wing may be a hard motorcycle for many to understand, especially those that like to leave their baggage behind, but the more time you spend relaxing in the seat, the more appealing it becomes.

Provided you keep the weight in consideration and keep your inputs smooth, the Gold Wing is a fantastic handler.

But regardless of the weight, it’s just an enjoyable motorcycle to spend miles on.

There are 4 automotive-style trim levels of Gold Wing to choose from, starting at $23,999.

It may not have the character some riders demand, but pound for pound the 2015 Honda Gold Wing is still the benchmark of the touring segment. And by the time the 50th anniversary model rolls around, it’s doubtful that will change.