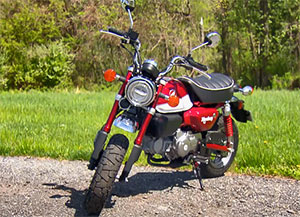 People tend to forget that it was motorcycles, not cars, that originally brought Honda to America. Their 1960’s “you meet the nicest people on a Honda” add campaign, not only did wonders for them, but for motorcycling in general. We sent Two Wheelin’ Brian Robinson to find out if that still rings true; but as usual, we found him just monkeying around.

“Yes, it’s street legal; and yes you want one. It’s called the Monkey, and along with the Super Cub it’s a 1-2 punch of nostalgia from Honda.

It’s hard not to get emotional when you see this 2019 Honda Monkey. After all, chances are good your first exposure to motorcycling was a Honda Mini Trail that was used to terrorize your neighborhood.

Yes, it was Honda that brought backyard motorcycling to the masses with the Z50. What we have here is not an exact copy, but the fun and friendly spirit of it lives on in the Monkey.

And thankfully it’s not a copy, as while 125ccs is not a lot these days, it beats the Mini Trail’s 50; still just a single cylinder of course. 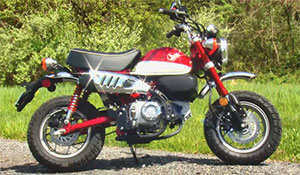 There’s an additional gear in the transmission as well, now 4 speeds.

And with nostalgia-seeking adults the intended buyers, not kids; it’s bigger as well. I wouldn’t say it’s perfect for my 6-foot frame, as I do tend to feel like the monkey here, but it works better than I thought it would.

Top speed is around 60 miles-per-hour, so you’d be wise to avoid the interstates; but it has no problems keeping up with traffic on two lane byways and city streets.

While we usually save pricing information for the grand finale, it’d be prudent to mention it here. Only to say that you can’t expect much in the way of a sophisticated suspension for a bike that costs $4,000.

And indeed, if there’s a minor bump in the road, chances are it’ll soak it up; anything more, you’re on your own. Keep your eyes on the road and plan accordingly.

There is a nice digital gauge display with speedometer and fuel gauge, and LED lighting to reinforce the fact that this Monkey is inspired by the Z50, not a rebirth of it. 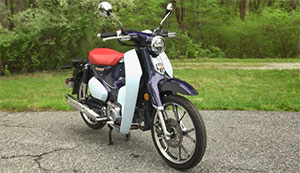 But, much like the original Mini Trail, the Honda Monkey is the perfect gateway drug to quickly get you addicted to the thrills and freedom that motorcycling provides. The only problem I had? Fighting the urge to cut through everyone’s backyard on the way home from work every day.

Now, your chances of actually meeting one of those nice people on a Honda, is much better with this Super Cub 125. It is also inspired by, but not a direct copy of the Super Cub or CA100 that took California by storm in the 60s; while also showing up in Life magazine and Beach Boys songs.

While it disappeared from our market in the mid-70s, some version of the Super Cub has been sold in other parts of the world ever since.

Now, it returns here as the C125; featuring the same 125cc single cylinder engine as the Monkey. 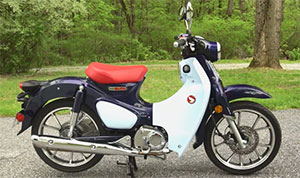 Even more modern than the Monkey, here you get keyless ignition; and a trick clutchless manual 4-speed transmission.

It feels much different to ride too, thanks to its 17-inch wheels and skinny 90-series tires.

And Price. It’s even cheaper than the Monkey, starting at just $3,599.

All told, these are two tiny Hondas that have big appeal, whether you’re old enough to remember the originals or not.