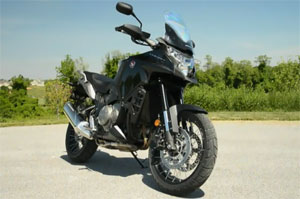 Trends come and go in the motorcycle world just like in the rest of the universe. And right now the adventure bike craze is still in full swing.

And after years of seemingly sitting on the sidelines, one brand is now launching an all out assault on the segment.

Brian Robinson: “Honda is now indeed in the adventure bike game bigtime, with not just 1 or 2 offerings, but 4 different adventure style bikes for the choosing. The biggest of which is this VFR 1200X.”

It may have been the 1000cc Africa twin that got the ball rolling; but for 2016, Honda has an adventure-style bike to fit just about any American rider, regardless of what your idea of adventure is. 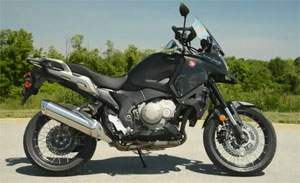 The CB500x and NC700x hold up the do- it-all lower end; while the off-road focused Africa twin and this pavement pounding VFR1200x take care of the high end.

And make no mistake, the VFR is designed more for eating mass quantities of tarmac, than dishing out any kind of dirt. Not that it couldn’t handle a fire road or two should your journey take you off the beaten path. Now, it’s not that Honda had to make any great strides to create the VFR 1200X for us. This bike was already available in Europe as the crosstourer.

As for the details, nestled inside the twin-spar aluminum frame is a 1,237ccs worth of liquid-cooled v4 engine. Transmission is either the traditional 6-speed manual, or surprisingly enough, a 6-speed dual-clutch automatic.

Power reaches the 17-inch rear wheel through a sealed drive shaft, and a 19-inch wheel up front completes the package.

It’s held on with a beefy-looking inverted KYB 43mm fork; while in back, suspension duties for the single-sided swingarm are held up by a KYB shock with remote adjustment for preload. Seat height at 33.5-inches is at the lower end of the segment; and comfort is good with a wide shape and plenty of padding. 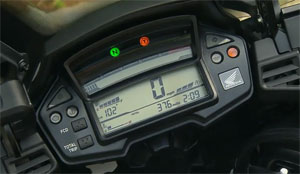 Spending time in that seat, reveals a very stable and willing platform for running out the full 5.7-gallons in the tank before stopping.

Power comes on in waves in just about any gear, whether you’re fully ready for it or not. High speed adventures are not a problem here whatsoever.

Of course any bike that claims to have adventurous intentions is compared to the BMW GS; and the VFR 1200x feels a little heavier and the suspension is clearly not as advanced as the BMW. I’m not necessarily against the idea of the dual-clutch transmission, but this manual, with perfectly spaced gears and light clutch, work so well, I don’t really see a need for it.

Honda’s selectable torque control traction system is standard; there are 3 levels of intervention, or it can be easily switched off. Instrumentation is fully digital, and there is plenty of information available without having to cycle through menus to get to it. 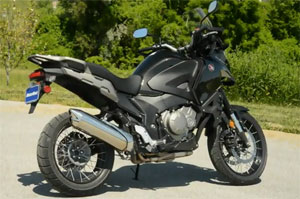 The standard windscreen offers 3-inches of adjustment, easily done with a one hand. Hand guards offer protection from stray tree branches, or more realistically, just from the wind on chilly mornings.

There’s even a socket for plugging in a GPS so you don’t have to hardwire it, or just for charging your    phone. Base pricing is a very reasonable $15,599. Add just $400 more for the DCT transmission.

It remains to be seen how much time is left before America’s adventure bike obsession gives way to the next fad. And admittedly, much like their 4-wheel SUV counterparts, many are more about marketing hype than anything else. Regardless, with the 2016 VFR 1200X and the rest of its adventurous 2-wheel lineup, Honda, is well situated for the time being.