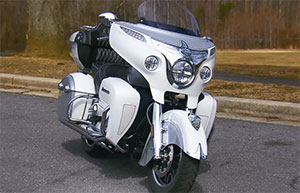 “There’s no getting around it, everything about this Indian Roadmaster is big, beefy, and beautiful.”

It doesn’t matter whether you’re looking at it, touching it, or sitting in it; the Roadmaster is designed for keeping you comfortable and looking good while doing it.

That includes the Thunder Stroke engine, its 111 cubic-inches, or 1,811ccs of V-twin, rumble out over 70-horsepower, and seemingly wants to release all of its 119 lb-ft. of torque with barely a release of the clutch lever.

It mates well with the 6-speed transmission, but also puts out a lot of heat; felt mostly through the seat, which had me reaching for the heated seat switch on my first ride, thinking it must have been left on. 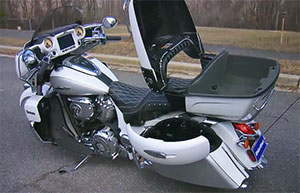 There’s plenty of comfort in that seat, as this big-boy is built for hitting the road for extended periods of time.  And Indian claims that between the hard saddlebags and top case, there’s more than 37-gallons of storage space for the journey. I’m not sure why anyone would ever need to carry that much milk, but it was more than enough space for me to tackle a week long road trip to Sturgis, with enough left over for bringing home the usual souvenirs.

All cases lock and unlock with the keyless ignition fob, just like your Camry.

The Roadmaster has been in Indian’s lineup since 2015, but recent updates include a new dash with Indian’s 7-inch touchscreen Ride Command System, which includes navigation and 200-watts of audio. More color choices as well, including the Pearl White over Star Silver I rode to Sturgis.

Also new, are selectable ride modes, consisting of Tour, Standard, and Sport; with each adjusting dynamics appropriate to their namesakes. 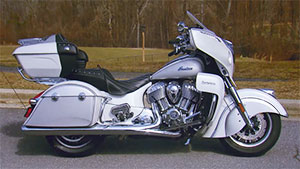 And little known fact, Indian has now enabled the rear cylinder to automatically shut off when you come to a stop; which should go a long way towards keeping that seat from heating up too much.

While not the most nostalgic-looking horse in the Indian stable, items like the valanced fender with lighted Indian head, are tasteful throwbacks to a bygone era.

The wide fairing and adjustable windscreen keeps wind off of you effectively even in the down position; only reason to go up would be to create a bubble to shelter you from rain.

You are dealing with well over 900-lbs. here, and 5½-gallons of juice, will get you around 200-miles on a tank. But, at speed, the Roadmaster falls into turns relatively easily, and even at a slow pace it’s easy enough to maneuver. 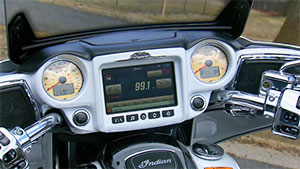 All controls are substantial, and easy to use with gloves on; while handy storage bins in the fairing lowers are very useful for gloves, sunglasses, or snacks.

Being a true master of the road means this luxury-liner ain’t cheap, starting at $29,499. But if you’ve got the cash, you will not regret using it for one of these bad boys.

Much like pickup trucks over on the 4-wheel side; big, touring cruisers are one thing that American brands just do right. And the Indian Roadmaster compares quite favorably with its Wisconsin-based rival, only surprisingly, it takes the nostalgia theme even farther. And farther is exactly where you’ll want to go on a Roadmaster.