Entry-level sport bikes used to be few and far between, and for many years the Kawasaki Ninja 250 was the cream of the crop. Well, much like in the car business, small is the new black. So with increasing competition, it was time for the baby ninja to get an update. And our sensei Brian Robinson shows us how it went. 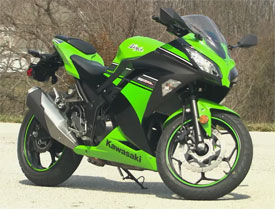 BRIAN ROBINSON: This Kawasaki Ninja 300 is a direct response to the Honda CBR250R, and if nothing else, both bikes prove that beginner sport bikes have a lot more to offer than just ushering in new riders.

The 2013 Ninja 300 takes the traditional Kawasaki approach to things by cramming in more power than other entry-level sport-bikes. But, much like its larger brother, the ZX-6R, it does so mainly by just adding more displacement than the competition.

The basic engine architecture is the same as the previous Ninja 250R, but the liquid-cooled, parallel twin gets a lot of new parts, including fuel injection, growing from 249 to 296ccs along the way. Kawasaki doesn’t publish horsepower numbers, but reasonable estimates put it just under 40; that’s at least 10 more than the Honda.

It’s encased in a revised, old school perimeter-style steel frame with 37mm forks attached up front and a dual-sided swing-arm with the single rear shock adjustable for preload only. 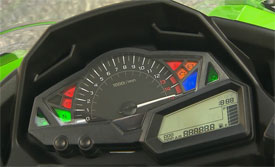 Bodywork gets a much needed modern makeover that gives the little Ninja a much more aggressive look than before. A “floating” windscreen provides decent protection with minimal turbulence, and a new instrument panel belies the bikes entry-level price-point with a nice looking array of information and a large analog tach.

The tank blends in nicely with the bodywork and holds 4½-gallons, while the Ninja 300 rides on 17-inch wheels front and back, with a 140 rear tire. The black, angular muffler also blends in well, and keeps things mostly quiet, while a metal heat shield keeps boot soles from trying to become one with the muffler.

The tail section is of a minimal design, and unfortunately so is the seat, but overall ergonomics are good, as this bike’s primary mission is for street riding. Clip-on bars are relatively high for a sport-bike, seat height is less than 31-inches, and foot pegs are low enough to be scraped on occasion in aggressive riding. Which is easy to do with this Ninja’s light and nimble composure. It weighs just 379-pounds and feels tiny beneath you, falling into corners with ease, and holds a line effortlessly.

A slipper clutch and available ABS are also on hand to help with transitions into corners. You’ll find just a solitary brake disc up front, but it combines with the single disc in rear to give you adequate stoppage. 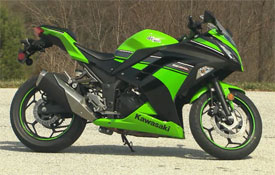 There are 13,000 RPM to play with, and you’ll find the majority of power in the upper register, though there is adequate oomph to be found in the lower range, as well.

Pricing begins at $4,799, 49-99 if you opt for the Kawasaki lime green Special Edition paint; add $500 more for ABS. That’s a few hundred more than the Honda CBR250R, but you get a lot more engine for the money.

Entry-level sport-bikes have certainly come a long way in recent years. No longer just for “learning and turning” in for a bigger bike, they make entertaining and economical daily drivers as well as a cheap option for taking in track days. And the 2013 Ninja 300 is another leap forward for the segment, one that it firmly now leads.