In 1972, Kawasaki kicked the sport-bike world into a new gear with the Z1.  And ever since, they’ve kept the throttle pinned by unleashing a steady stream of street going track weapons.  And this Kawasaki Ninja ZX-6R keeps the tradition going. 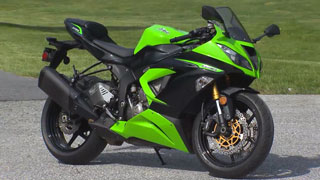 The 2013 edition of the Kawasaki Ninja ZX-6R is all-new and looking to slice its way through the middle-weight sport-bike competition, and packing the biggest engine in the class is always a good way to start.

Its 636cc engine has a few more cc’s than the typical 600 sport-bike, thus can pack in just a bit more mid-range, which is much appreciated in the real world riding that most of us do.

The rest of the powertrain is typical sport-bike, 6-speeds and chain drive.

Even at less than record speeds, the ZX-6R feels right at home on the track.

An F.C.C. slipper clutch smoothes corner entries, no matter how ham-fisted you are with the clutch while the Uni-Trak rear suspension w/ GP style swingarm uses a longer shock, working in conjunction with the Showa Big Piston, Separate Function Forks to keep you settled through the corner. 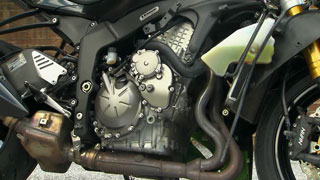 There’s multi-stage traction control and engine mapping to assist as well.  Adjustments are made with a switch on the left clip-on.

When it comes to monitoring vitals, digital instrumentation is clear with plenty of information, and there’s a nice big analog tach.

But like most Ninja owners we spent most of our time on the street, and the new Ninja excels there as well.

The phrase clip-ons is rarely used in conjunction with the word comfortable; but for a bike designed primarily to win races, it offers more than acceptable comfort for weekend runs.  Your wrists will be the first items to feel the pain.

The throttle is ultra-responsive thus can be a little herky-jerky, like driving a Ferrari in a parking lot, until you get a feel for it.

Without a doubt, the new 636 sports an even more purposeful design.  Larger openings in the bodywork allow you to see more of that engine and the twin-spar aluminum frame, but also aid in cooling.

Twin headlights are housed in a sleeker front end with a large air intake in between, turn signals are mounted almost flush, and the tail is about as minimalist as it can be.

The angular shaped muffler is also kept small thanks to an exhaust pre-chamber located under the bike. 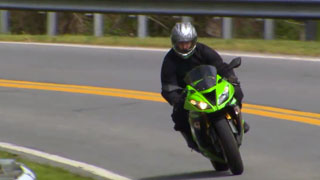 Front brakes consist of 310mm discs with 4-piston calipers.  While in back a single piston caliper grabs a 220.  ABS is available.

At $12,699, that’s with ABS, middle-weight sport bikes are no longer the bargain they used to be, but they also pack performance that could only be dreamed about a few short years ago.  You can save a grand by doing without ABS, but that’s still pricier than most in the segment.

All sport bikes are fast, it’s the little things that set them apart and just being a little more powerful is probably not enough anymore.  But the 2013 Kawasaki Ninja ZX-6R is more than just faster; it’s a high tech, highly capable street-bike that’s taking the middle-weight segment to new heights.