While our Two Wheelin’ guy Brian Robinson is busy checking out the latest for cruising, we thought, “why not take a look back at some of the bikes that paved the way?”… and on that front, our friends at RetroMoto are more than happy to go full throttle.

MATT SMITH: Hi, I’m Matt Smith. Welcome to RetroMoto. We’re headed out to a beautiful country estate to see Dick and John, a couple of vintage bike racers, test and shake down their incredible Nortons before the next event. These guys race their bikes all over the country. 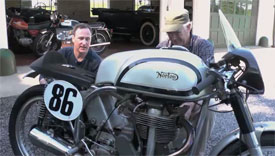 JOHN LAWLESS: These are the late series Manx. They’re a 500cc double overhead cam design; with the featherbed frame. This is a perimeter frame designed by Rex McCandless and his brother. It basically set the path forward for all racing motorcycle frame technology for the next 40 years.

DICK MILES: Yeah, in its day it was very advanced. The engine’s a, uh, of course, a single cylinder, and the valve gear is by shaft and bevel gears. It’s a double overhead cam in a magnesium cam box. Matter of fact, one third of the price of the bike was in the cam box so, it was a, it was a selectively fitted very precise double overhead cam engine. By the end of its run, by when these were made, the Italians had already taken over with multicylinder bikes and these were sort of leftovers but they were still raced and uh, with a lot of success.

MATT SMITH: So are we going to fire these things up?

JOHN LAWLESS: We’re going to fire them up and do a little testing.

JOHN LAWLESS: You ready to go?

JOHN LAWLESS: Let’s do it.

MATT SMITH: Let’s do it!

MATT SMITH: No electric start here. These bikes are push start only. We’re getting a chance to witness something so few people ever get a chance to hear and see anymore. Two Manx Nortons, not in a museum, not on a racetrack, just tearin’ up a country road. 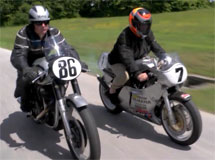 JOHN LAWLESS: These motorcycles were actually so well developed that they continued to be a force in the Grand Prix scene right up until 1969 was the last year; seven years after production ended.

MATT SMITH: What’s the top speed on one of these?

JOHN LAWLESS: That’s why they dominated for so long.

MATT SMITH: Time marches on, or in this case, flies by in the form of Gary Fisher on a Yamaha TZ-750. By the early 70s multicylinder two strokes were dominating road racing; leaving the old guard, like the Manx, hopelessly outgunned. The TZ-750 was the final evolution of that technology, and Gary was a member of the Yamaha international team that ruled the circuit. The TZ-750 won every Daytona 200 from 1974 to 1982.

MATT SMITH: This is a four cylinder 750… 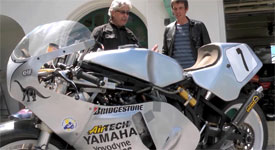 GARY FISHER: It’s basically two TZ-350 Yamahas bolted together. It has a Spondon frame which is very unique. There’s only a few of those in the world. Uh, they’re handmade exhaust pipes, as you see fitted with the uh, silencers. And, these wheels are just uh, you see how wide the wheels are to accept the big slick tires. Yes, and I actually am not that old that I don’t know about slick tires on motorcycles.

GARY FISHER: When I first rode this motorcycle in its full blown prototype, uh  configuration, going over the, uh, start finish line, with the little piece of paint, it would spin the back wheel in top gear at a hundred seventy,  hundred and seventy five miles an hour. So that’s some real horsepower.

MATT SMITH: Well thanks for showing me this bike, Gary, I really appreciate it. This is one magnificent machine.

GARY FISHER: Well my pleasure, Matt. Nice to see you again and, hey, stop by the shop and take it for a spin one day.

MATT SMITH: I would love to do that.

MATT SMITH: We had a chance to look at some incredible motorcycles today: the Norton Manx, the TZ-750; but it was really the Manx that paved the way for the future of production racers.