You don’t have to look too hard in the automotive world to find retro styling, with many brands looking to the past for current inspiration.  Well, there’s one company that does more than just look to the past, they’re fully living it. And proudly doing so!

BRIAN ROBINSON: Up until now, Royal Enfield has indeed been living in the past, by making the same basic motorcycle for the last 50 years with only minor updates along the way. Well, that all changes now, with a new Continental GT. 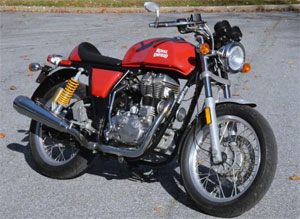 While some pieces carry over from the Bullet they’ve been peddling since the brand returned to the states in the mid-90s, this Continental GT is as close as the brand has come to an all-new bike in decades; and features “right bike at the right time” styling that should do wonders for both the brands image and their bottom line.

And without a doubt, they’ve nailed the café racer look perfectly.  From the low clip-ons with bar-end mirrors, to the scalloped metal tank, and rear-hump vintage racing style seat.

Hopping on board, there is a reach to those clip-ons, but not as much as you think; so there’s not too much pressure on the wrists. The seat also has more comfort than expected; and the overall riding position is actually quite good. 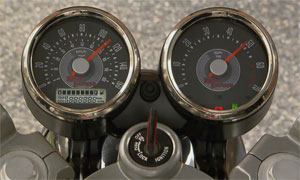 Gauges are fairly simplistic, as you would expect. Though surprisingly, there is a digital fuel gauge. Thumb the starter, and 535ccs of single roars to life. It’s a reworked and enlarged; fuel-injected version of the Bullet’s 500cc engine and it sounds great, with a nice little burble to it that brings Nortons and BSAs to mind.

Royal Enfield’s claimed output is 29-horsepower. And of course there’s still a kick-starter, as well; should you have the desire for more physical interaction.

The transmission is a 5-speed, and there is some slop to the left-side mounted shifter that you wouldn’t find on a traditional Japanese motorcycle; but it worked flawlessly throughout its stay. Making it a truly international affair, the Italians chime in with rear shocks by Paioli and brakes by Brembo. 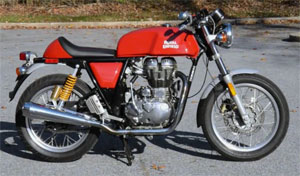 Both certainly contribute to the Continental GT’s very sporting nature, as other than an occasional stumble off idle the riding experience is seamless and pure joy.

Fairly sticky 18-inch Pirelli Sport Demon tires make diving into corners plenty settling, and the suspension seems very well dialed in, even with a heavyweight like me onboard.

A relaxed pace is not a necessity, but you’ll find it much more rewarding. The engine feels willing, but there’s some serious vibrations happening as you approach 70 miles-an-hour that make you want to back it down; the bike itself however, feels plenty stable at those speeds.

One thing to keep in mind, thanks to all of those vibrations: like a true vintage motorcycle, you’ll need to either get friendly with Loctite or get used to tightening an occasional bolt or two. 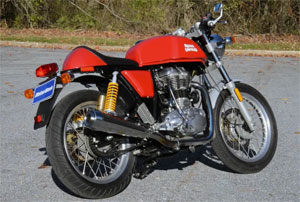 Weight comes in just over 400 pounds, and the bike feels very small. Pricing is also small, at just $5,999.

Some experiences in motordom are truly unique, and riding a brand new, vintage British motorbike that’s built in India certainly qualifies. But, setting all of that aside, the 2014 Royal Enfield Continental GT is just a fun, back to basics motorcycle; that is every bit as enjoyable to ride as it is to look at.