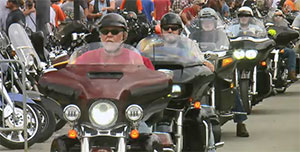 I’m off to Sturgis!  More specifically, the 2018 edition of the Sturgis Motorcycle Rally, which takes place in and around the town of Sturgis South Dakota, aboard this 2018 Indian Roadmaster.

Having envisioned taking the long, hard road to Sturgis from Maryland, and basking in all of the biker cred I would surely receive upon doing so, after three days on the road, I really just feel like I cheated on the test.  As, I’ve driven plenty of cars that don’t have as much long distance comfort as this Roadmaster. Oh well, maybe next year I can find a rigid-frame chopper to ride up here.

“Well, after 2,000 Miles, me and the Indian Roadmaster here have finally made it to the Back Hills of South Dakota. So, let’s find out what the Sturgis Motorcycle Rally is all about.  And who knows, we might even see some wild life.”

So, why exactly do half a million motorcycle enthusiasts gather in the Black Hills of South Dakota every August? Well, the reasons are as varied as the people who make the trip and the bikes they brought with them. 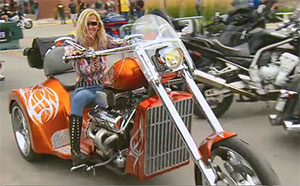 And believe it or not, there are plenty of things to do in and around the town of Sturgis that doesn’t involve bikini contests or wrestling in various mediums. There are literally hundreds of bands playing, and just about every motorcycle manufacturer is on hand with demo rides of their latest models. Not to mention every aftermarket vendor you can think of, and yes, they do have that in leather.

But really, it’s all about the bikes…

…and some absolutely terrific roads to ride them on, through some of the most amazing scenery you’ll find, in what has unfortunately been dubbed fly-over country.

Of course, this all started back in the 1930’s with a motorcycle race put on by a local Indian dealer, who wanted to drum up some publicity for his new dealership. And yes, there is still plenty of racing going on, including an American Flat Track TT race that takes place right on the grounds of the renowned Buffalo Chip campground. 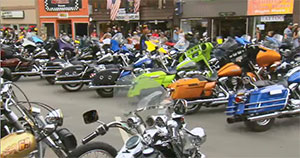 FYI, the Chip is where you want to be to see the real wildlife, but we’ll save that for another time. Let’s just say the amount of lite beers consumed here every night would put the Talladega infield crowd to shame.

And then of course there’s the legendary street scene. The town of Sturgis itself, has less than 7,000 full time residents; yet they roll out the red carpet every August for a few hundred thousand visitors.

Needless to say, it’s a haven for people watchers as well; which might explain the several families we saw walking around town like they were on some anthropological learning vacation.

One thing you won’t see a whole lot of, are helmets. Apparently, it’s hard to roam free in a pack, under the constraints of safety or common sense.

But really, the rally is much bigger than Sturgis itself; everywhere you go within’ a 50-mile radius of town is packed with bikes. Nearby towns Deadwood, Custer, Hill City, Spearfish, Rapid City, and Keystone among others, are jammed with bikes and have their own street scenes throughout the ten days of the rally, not mention every campground in the area. So whatever reason you need, and whatever motorcycle you ride; get your motor running, and head out on the highway next August to the Sturgis Motorcycle Rally. You’ll never forget it!