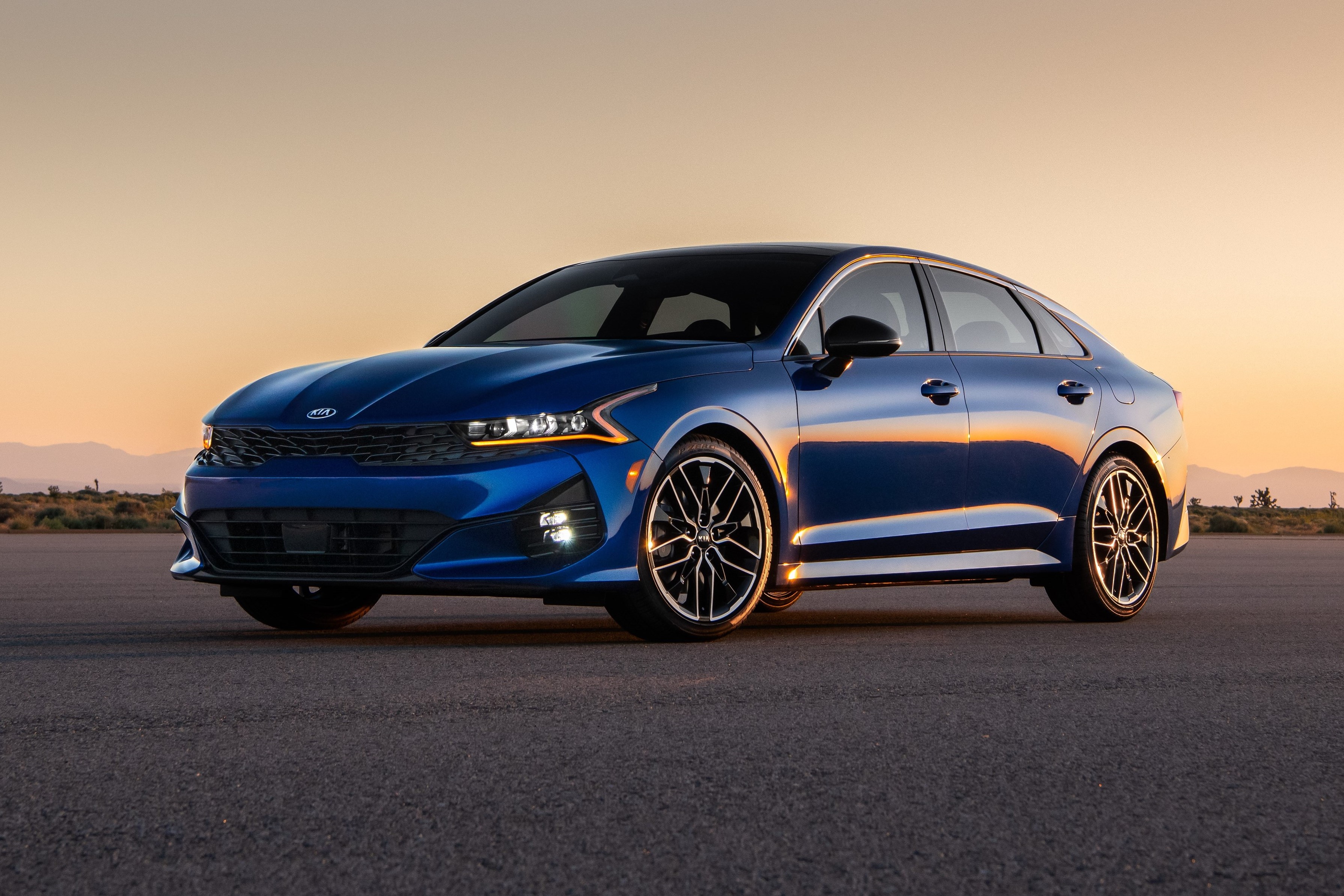 Once in a while, carmakers do things not necessarily because it’s the smart thing to do, but because it’s the fun thing to do. Obviously, those are generally the cars that excite enthusiasts and us the most. 2021 sees Kia go a little “Dodge” on their new midsize K5 sedan by making it more powerful, and not just by a little bit. We’re speaking of the new Kia K5 GT.

Now, the standard K5 midsize sedan launched just a few months ago, replacing the Optima. And along with the name change, came a longer, lower, and wider chassis; as well as optional all-wheel-drive.

That original Optima served Kia well for 20-years.  Arriving for the 2001 model year, we declared that the good mechanicals and no-nonsense design of this Accord and Camry fighter fully displayed the can-do spirit of its Korean creators, and could soon make Kia a 3-letter staple in suburban American garages.

That can-do spirit remains, and has channeled its energy towards creating Kia’s most powerful front-drive midsize sedan ever. And it feels like it; in a “this is way too much power for this car” sense.

The K5 GT has no problem doing a burnout; and when its new Sport Plus mode is engaged, response is instant. So, whether you’re sitting still or rolling along, punch it, and it takes off; or just spins the tires a whole lot, as there’s no all-wheel-drive here to provide any additional grip.

Kia did provide a well designed 8-speed DCT transmission. It’s their own wet clutch design similar to a motorcycle or Volkswagen’s original DSG; bathing the clutch packs in oil to keep them cool and enable a more compact packaging.

So, what’s causing all of this chaos in the first place? It’s a 2.5-liter turbo inline 4-cylinder engine cranking out 290-horsepower and 311 lb.-ft. of torque. That’s 110 more horsepower than the standard K5.

In our original K5 test, we did long for a little more power, and Kia has certainly obliged. Based on feel alone, we’d put 0-60 in the low 5-second range.

The K5 is of course mechanically similar to Hyundai’s Sonata, and this GT relates very closely to the Sonata N Line. According to Kia, the MacPherson strut front and multi-link rear suspension has been “sport-tuned” in addition.

Indeed, the steering does feel a little quicker to respond, but ultimately it doesn’t feel as much like a sport sedan as it does a 90’s front-wheel-drive tuner car.

The cabin of the K5 really is a fabulous place to be; simple, flowing lines look Audi-esque in their execution. A panoramic moonroof is standard, the upgraded sport seats are more comfortable than sporty, and the flat-bottom GT steering wheel feels great in your hands. There are plenty of GT logos scattered about, making sure all occupants are on the same page.

Outside, Kia ups the aggression level with 19-inch machined finish alloy wheels; behind them, are bigger brakes with GT-labeled calipers. Black accents are liberally applied, even on the side mirrors and rear spoiler.

Kia joins the ranks of the “audio enhanced”, with an Active Sound Design system that augments engine noises relative to the selected Drive Mode. Or, if you prefer, you can dial up some soothing Sounds of Nature.

For our complete road test of the Kia K5 GT be sure to catch MotorWeek episode #4040 that begins airing June 11, 2021. For a listing of the PBS public television stations that broadcast MotorWeek, go to motorweek.org and click the “About the Show” tab at the top. MotorWeek is also seen Tuesday evenings and Sunday afternoons on the MotorTrend cable channel. The show can also be streamed on PBS Living through Amazon’s Prime Video.

So, as impressive as the 2021 Kia K5 GT is, and its engine is the real deal, it feels like it needs more chassis tuning to go along with it to qualify as a true sport sedan like their own Stinger. But, that does not make the K5 GT a mistake, far from it. In fact, this same exact formula was used for so many muscular family cars in the 1960s that we look back so fondly on now. The Kia K5 GT is a fabulously modern example of how being a sensible daily driver does not have to be boring.